The City hybrid will get a 1.5-litre petrol engine mated to two electric motors. 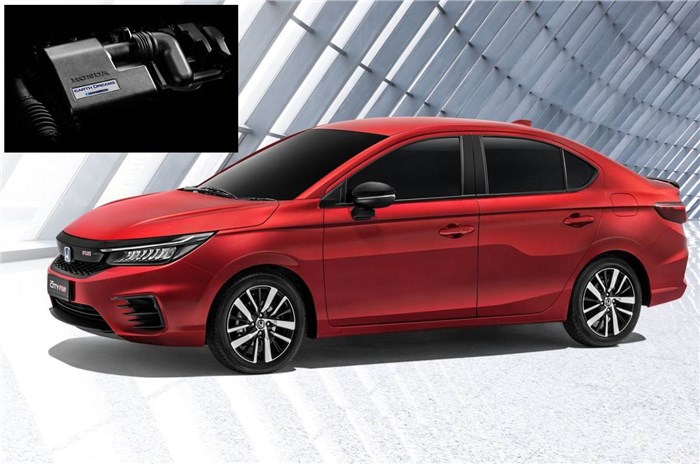 Honda Cars India has confirmed that the City hybrid will see a market launch sometime in mid 2022. The model went on sale overseas earlier this year and is already on sale in Malaysia. We reported about the imminent India launch of the Honda City hybrid back in August 2020, and now the company has confirmed its plans to launch the model here. “We will be launching the (City) hybrid in the next financial year,” Rajesh Goel, senior vice president and director, sales and marketing, Honda Cars India told Autocar India in an interview.

Honda was initially gearing up to bring the City hybrid to our market this year. However, COVID-19 and ensuing lockdowns played spoilsport. Still, Honda has reassured that it remains committed to launching a “mainstream hybrid” in India with the introduction of the City. Goel mentioned that the company now plans to roll out the car in India in the next financial year, which means the City hybrid will be launched only after March 2022.

The City is Honda’s oldest model in India and has been a strong pillar for the brand here.  Honda recently have begun exports of LHD version of the City to countries like Mexico and Turkey.

The City hybrid comes with Honda’s i-MMD, the hybrid technology which is also used on the international-spec Honda CR-V hybrid and in the new-generation Honda Jazz sold abroad. Like the technology that powers the Honda Jazz e:HEV for international markets, the i-MMD hybrid setup in the new City is made up of two electric motors and an internal combustion engine. A 98hp, 127Nm, 1.5-litre, four-cylinder, naturally aspirated Atkinson Cycle petrol engine sits under the bonnet of the new City.

The first electric motor, which is integrated in the petrol engine, assists and acts as an integrated starter-generator (ISG), while the second motor sends drive to the wheels. 109hp and 253Nm of torque is developed by the second unit and sent to the front wheels via a bespoke gearbox with a single, fixed-gear ratio.

Thanks to this setup, the City will be frugal in urban environs – where it will just run on the electric motors, while out on the highway, the petrol engine will take over, providing much stronger performance.

Honda aims to sell around 250-300 units of the City hybrid each month, which translates to about 10 percent of the regular model’s average monthly sales figure. The automaker has set a conservative target and is not banking on large volumes as the hybrid is expected to command a Rs 2-2.5 lakh premium over the petrol sedan. As such, the top-end variant of the City hybrid is expected to come in at around Rs 20 lakh on-road.

Honda’s imminent launch of a mainstream hybrid is a move towards meeting the 2022 CAFE 2 (Corporate Average Fuel Economy) norms which, as the name suggests, will tighten the average CO2 emission limits for each company’s vehicle parc. Like most other Japanese automakers, Honda is also choosing to go down the hybrid route to meet stricter regulations, unlike some players in the Indian market which are still betting on diesels.

Too late in the game.

Too late in the game.