Up to Rs 1.5 lakh off on Tata Hexa, Harrier, Safari, Nexon, Tigor and more

In anticipation of the festive season, Tata Motors is officially offering huge benefits on its cars and SUVs this September. 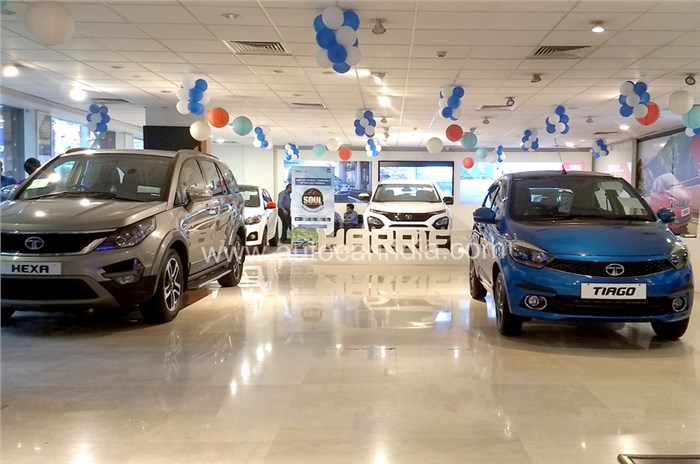 As the gloom of the automotive slump keeps on, automakers are resorting to heavy discounting to bring back demand. With the festive season just round the corner, Tata Motors has officially authorised its dealers to offer substantial benefits to prospective customers. Read on to know the discounts you could avail if you decide to bring home a Tata vehicle this month.

Save up to Rs 1.5 lakh
A formidable opponent to the popular Toyota Innova Crysta, the Hexa can be had in 6- or 7-seat configurations. Under the hood is a 2.2-litre diesel motor mated to either a manual or a torque-converter automatic gearbox. There is also the option of all-wheel drive on the range-topping variant. Opting for the Hexa over its rivals will help you save up to Rs 1.5 lakh.

Benefits of up to Rs 1.15 lakh
Last refreshed in 2018, the Tigor is Tata’s answer to Maruti Suzuki Dzire, Honda Amaze and Ford Aspire. Offered with a choice of 1.2-litre petrol and 1.05-litre diesel engines, the compact sedan also gets the convenience of an AMT auto on the former. With a facelift under development, the current Tigor is being offered with whopping cash discounts, exchange benefits and financial schemes up to Rs 1.15 lakh.

Benefits up to Rs 85,000
With the arrival of the Hyundai Venue and Mahindra XUV300, the Nexon has been facing stiffer competition than ever before. The compact SUV's extensive variant line-up, which includes 1.2-litre turbo-petrol and 1.5-litre diesel engines, can be had with cash discounts and exchange bonuses up to Rs 85,000. To fend off competition better, Tata recently updated the SUV with a larger 7.0-inch touchscreen system and also has a facelifted version in the works.

Save up to Rs 75,000
Though the Bolt might not be as popular as some of its rivals, it is still a competent hatch with an impressive amount of cabin space. You can save up to Rs 75,000 in the form of cash discounts when you buy the Bolt. Powertrain choices include a 90hp turbo-petrol engine or a 75hp diesel, both clubbed with a manual gearbox unit.

Benefits of up to Rs 75,000
The Zest is the older of the two compact sedan offerings in Tata’s range and might even feel a bit dated in terms of equipment. It does, however, make up for that with reasonable cabin space and comfort levels. In terms of mechanicals, the Zest can be had with either a 90hp petrol motor or a diesel unit in two states of tune – 75hp and 90hp – with only the more powerful diesel getting the option of an AMT auto gearbox. Benefits amounting to almost Rs 75,000 can be availed on the Tata sedan this festive season.

Benefits of up to Rs 70,000
The Safari Storme has been a part of the Tata line-up for a while now and can feel a bit dated. However, those looking for a big and butch SUV can go for the Storme, and get a discount of Rs 70,000 which includes consumer discounts and exchange benefits. The Safari comes with a 2.2-litre diesel mated to a manual transmission as standard and an optional four-wheel-drive layout.

Benefits of up to Rs 70,000
Rival to the Maruti Suzuki Wagon R and Hyundai Santro, the Tiago is a popular model from the Indian carmaker. Equipped with the same powertrain options as its sedan sibling, namely the 1.2-litre petrol and 1.05-litre diesel motor, the hatchback is being offered with a significant exchange bonus and consumer discount of worth up to Rs 70,000. A facelifted Tiago is also expected in the coming months.

Benefits of up to Rs 50,000
Since Tata launched the Harrier earlier this year, competition in the mid-size SUV has heated up with the arrival of the Kia Seltos and MG Hector. To keep the model fresh, the automaker recently introduced the Harrier Dark Edition. Available with only a 140hp, 2.0-litre diesel engine mated to a manual transmission, the Harrier is set to offer greater variety in the coming months, with the option of an automatic transmission, and even a 7-seater variant that has been dubbed 'Buzzard' for the time being. People who choose the Tata offering over its rivals could save up to Rs 50,000 this month in the form of exchange benefits.

Up to Rs 1.05 lakh off on Maruti's Vitara Brezza, Swift, Dzire, Eeco