MG India is developing a compact SUV based on an all-new platform which will also spawn an MPV and a hatchback. 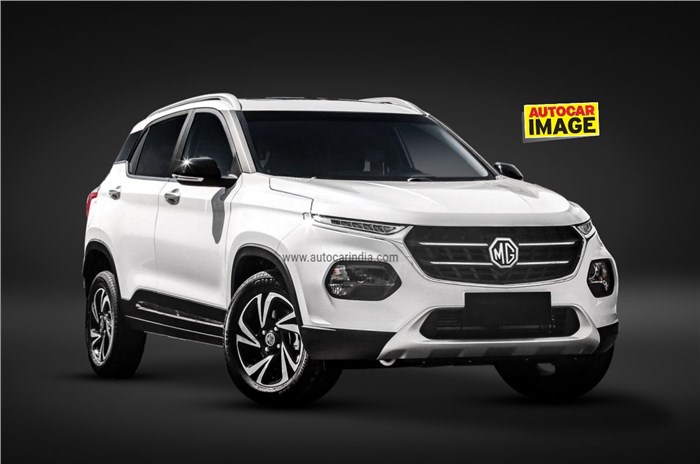 MG India has gained a firm foothold in our market, following a strong run with the Hector (and Hector Plus), the ZS EV and the Gloster. However, its parent company SAIC has bigger plans for India. The carmaker is now gearing up to launch its Creta rival - the petrol version of the ZS SUV, called the Astor – in September this year. Speaking exclusively to Autocar India, the company's president and managing director, Rajeev Chaba, has confirmed that MG is also mulling its entry into the sub-4m SUV category in India.

MG compact SUV: when will it be launched?

MG is in the midst of expanding the capacity of its Halol plant in Gujarat, from 80,000 units to 1,00,000 units per annum, to accommodate the Astor. "We need to use the full capacity at Halol, which can go up to 1,00,000 units, and we have the product plans to fill that plant," said Chaba.

Commenting on MG's future strategy, he said, "In the next one-two years, if we can do 1,00,000 vehicles in the Halol plant profitably, then that will be a great achievement. On that foundation, we need to get into the second plant, through collaboration or on our own, and then get into the sub-4m segment."

MG compact SUV: what will it be?

Until now, all MG products brought into India have been plucked straight out of SAIC’s vast portfolio. However, the automaker's parent company currently doesn't have a sub-4m SUV in its global range.

The earlier plan was to re-engineer and rebadge SAIC’s Baojun 510 SUV into a sub-4m model for our market. The Baojun 510 has a 4,220mm length, giving it one of the smallest footprints in SAIC's SUV line-up, and making it a candidate for being modified and launched in India. Lending credence to this is the fact that the 510 has already been spied testing on our roads in the past.

However, after the success of the Hector, SAIC has upped the ante and wants to invest in designing and developing an all-new, sub-4m platform that can act as a base for a variety of body styles for the Indian market. Adapting and repurposing existing Baojun products, then, isn’t the optimal solution.

So MG’s upcoming compact SUV for India will be fresh from the ground up.

MG compact SUV platform to spawn an MPV and a hatchback

Developing an all-new platform to meet the latest regulatory requirements, and one that is optimised for Indian conditions, is ideal, but expensive. The only way to amortise costs would be with multiple body styles. Hence, the plan is to first launch a compact SUV, followed by an MPV and finally a hatchback.

The MPV category has seen a resurgence in India, with the Renault Triber and Maruti Suzuki Ertiga, and is something that is increasingly catching the fancy of more automakers. The hatchback segment, however, has proven to be a tough nut to crack because of Maruti and Hyundai’s dominance.

MG’s compact SUV is expected to arrive only after 2023, with the MPV and hatchback to make an appearance further down the line. By then, MG could be looking at leveraging its strong positioning to attract even the risk averse hatchback buyers.

The trio of new models are expected to help MG deliver break-even volumes of around 2,00,000 cars –the minimum number needed to justify the setting up of a new plant.

When the sub-4m MG SUV does make its way to Indian roads, it will land in an overcrowded segment, with representation from almost every mass market player in the country. It will have to take on established rivals like the Maruti Suzuki Vitara Brezza, Hyundai Venue, Kia Sonet, Tata Nexon, Ford EcoSport, Mahindra XUV300 and the Toyota Urban Cruiser.

Then, there'll be the Nissan Magnite and Renault Kiger towards the budget-end of the segment. Moreover, other new players, like the Citroen C21 (likely to be named the Citroen C3 Sporty) and an all-wheel drive model from Jeep, will also be vying for a piece of the compact SUV market by that time. MG, then, will surely have its work cut out.

The best option in such a scenario would be a partnership with another manufacturer. MG Motor India has said it is open to partnerships and sharing capacity. “To be honest, we have been in touch with a few players in India,” Chaba told Autocar India. The most logical partner would be the VW Group, given SAIC’s proximity to the German auto major by way of successful joint ventures in China.

What’s not known to many is that discussions between the two automakers to explore joint opportunities, like capacity sharing and joint product development for our market, actually took place around two years ago when VW’s ‘India 2.0’ plan was being crystallised. If you think about it, it makes sense for SAIC and Volkswagen to join hands to develop a compact SUV, which is the next segment both companies are planning to enter.