In the following weeks, the prices of the EV6, Venue facelift, VW Virtus and a few others will be announced. 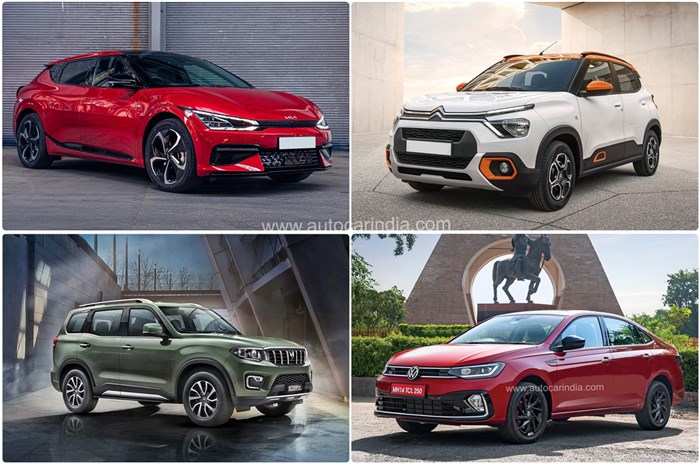 It's almost mid-2022, and carmakers are already busy readying cars and SUVs to be launched during the festive period later in the year. But the month of June 2022 itself has quite a few launches, notably from mass-market brands like Maruti Suzuki, Hyundai and Kia. We have compiled a list of all-new car, SUV launches and unveilings in the coming weeks

As the sister model to the Skoda Slavia, the VW Virtus was globally unveiled in March and is set to be launched in the coming weeks. The midsize sedan sports an interior that’s largely similar to the Taigun, with all the bells and whistles from its SUV counterpart. VW will offer the Virtus in two distinct variant lines – Dynamic Line, which includes all the 115hp, 1.0 TSI variants, and the Performance Line, which includes the 150hp, 1.5 TSI variants.

As part of the major mid-life cycle refresh, the Hyundai Venue facelift is expected to have an all-new front end design and a major makeover on the interior. With the styling inspired by the new Tucson SUV and the overseas-sold Palisade, the Venue facelift is expected to be powered by the same 120hp, 1.0-litre turbo-petrol; 115hp, 1.2-litre petrol; and 115hp, 1.5-litre diesel engines.

Maruti Suzuki is expected to launch the all-new Brezza by the end of June, and it now features an all-new exterior design, as seen in recent spy photos. The compact SUV is also expected to get a refreshed interior with features seen on the Baleno and the recently launched Ertiga/XL6. The new Brezza is likely to get the 103hp, 1.5-litre K15C DualJet engine from the Ertiga and XL6, mated to a 5-speed manual gearbox or a brand-new 6-speed torque converter automatic.

Mahindra recently revealed the all-new Scorpio-N via official images, and the model will be sold alongside the current Scorpio. The SUV is likely to be positioned slightly below the popular XUV700 and is expected to get a large vertical touchscreen taking centre stage on the dashboard. Continuing with a ladder frame chassis, the Scorpio-N will likely be powered by the 2.0-litre mStallion turbo-petrol and the 2.2-litre mHawk turbo-diesel engine found on the Thar and XUV700.

The French automaker will soon introduce its second offering in the Indian market after the C5 Aircross SUV. Based on the CMP modular platform that underpins sub-4m SUVs from sister-brand Jeep, the C3 crossover is expected to be powered by a 1.2-litre turbocharged petrol engine. Upon its arrival, the C3 will take on the likes of the Tata Punch, Maruti Ignis and Nissan Magnite.

The Japanese automaker will launch its flagship LX SUV in India which shares the same TNGA-F body-on-frame architecture as the revamped Toyota Land Cruiser LC300. Lexus will offer the new SUV in LX500d guise, which will be powered by a 305hp, 3.3-litre twin-turbo V6 diesel engine that’s paired to a 10-speed automatic transmission.

Which of these upcoming models are you most excited to see on our roads? Let us know in the comments below.