The new Mahindra Scorpio-N looks familiar, although the rugged looks of the original SUV have now made for a more sophisticated design.

Mahindra recently revealed the exterior design of the all-new Scorpio-N in a set of official images. This is ahead of the new SUV being revealed in full, including its new interior, on June 27. The design of the new Scorpio-N is an evolution of the current Scorpio. And while it’s still readily identifiable as a Scorpio, it’s much more sophisticated and modern in its details. The current Scorpio will also continue to be on sale alongside the new SUV and will henceforth be called the Scorpio Classic.

We take a close look at how the design of the new Scorpio-N has evolved over its predecessor, while still retaining some familiarity.

Up front, the new Scorpio-N carries forward the butch and upright look of its predecessor, with a similar shape for the headlamps, bumper, grille and even the fog lamp housings, but has been tastefully tweaked to give it quite a sophisticated look. The grille, for instance, features six vertical chrome slats with the new brand logo (similar to the XUV700), ditching the seven-slat design of its predecessor.

The headlamps and bumper, meanwhile, are more rounded-off in contrast to the squarish design of the Scorpio Classic. The fog lamp housings, though of a similar shape, are now bigger and feature C-shaped LED DRLs. The new Scorpio-N, however, has lost the bonnet scoop, something that was a distinguishing design feature of the original Scorpio. 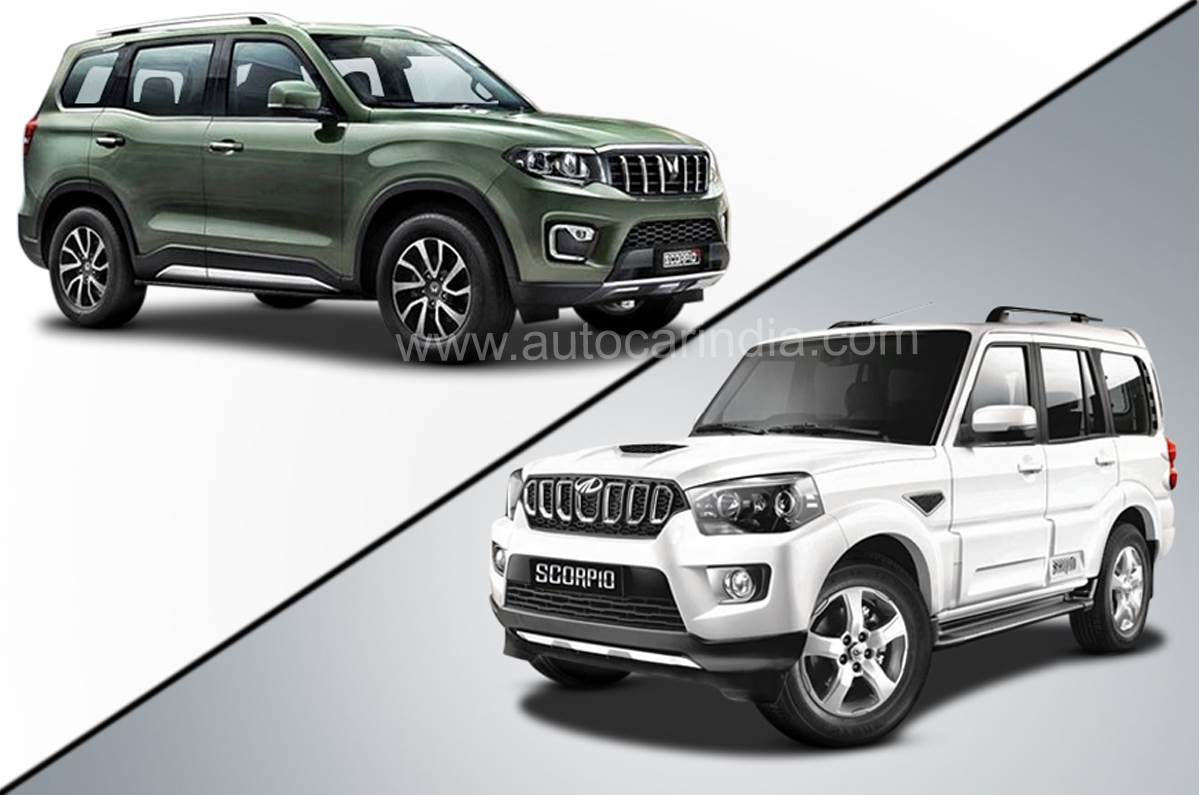 In profile, the Scorpio has always been characterised by flat surfaces, bulging wheel arches and faux body cladding for the lower part of the doors. The new Scorpio-N, however, takes a completely different approach, with curved surfaces, much lesser cladding and even features a prominent character line running the length of the SUV. The kink on the C-pillar is also much more pronounced this time around. The slatted plastic surround around the rear quarter glass has also made way for a cleaner window line.

Although Mahindra hasn’t revealed the rear-end design of the Scorpio-N in its official images, previous spy shots have previewed a completely redesigned rear end. It retains the vertical layout for the tail lamps but misses out on the characteristic double-barrel design and its protruding bulges seen on the Scorpio so far. Instead, the main tail-lamp cluster is more squarish and a lot sleeker than before.

The tailgate continues to be side-hinged, with the number plate housing right in the centre. The rear bumper, which came finished in body colour on the Scorpio, is now finished in black on the Scorpio-N and also gets a healthy dose of chrome. It also sits more flush with the rest of the body work. 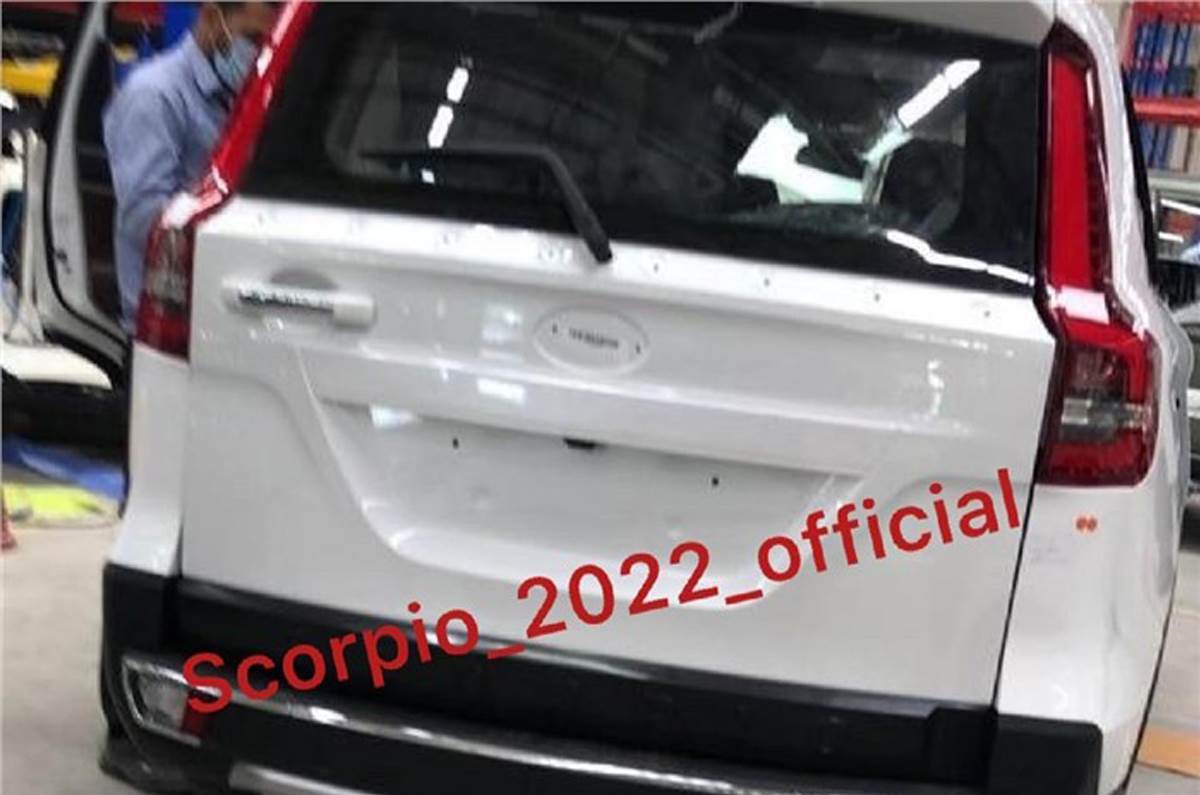 The styling of the Scorpio-N's rear end was revealed in spy shots recently. (Image Source)

And while Mahindra hasn’t revealed the exact dimensions of the Scorpio-N yet, the new SUV will be significantly larger than the Scorpio, and that’ll also open up more much space inside the cabin.

Mahindra Scorpio-N vs Scorpio Classic: other similarities and differences

Under the hood, the new Scorpio-N will be powered by a set of 2.0-litre petrol and 2.2-litre diesel engines. The diesel is an updated version of the current Scorpio’s engine, while the petrol unit is the new mStallion motor also seen on the Thar and XUV700.

Mahindra is likely to offer the diesel engine in two states of tune, although specific power outputs for all powertrains are still under wraps. Gearbox options will likely include a 6-speed manual and 6-speed torque converter automatic, with the all-wheel-drive system expected to be limited to top-spec diesel-automatic variants.

In contrast, the current Scorpio is expected to continue with its sole 140hp, 2.2-litre mHawk diesel engine that’s offered only with a 6-speed manual gearbox and in rear-wheel-drive configuration.

And while the interior is still under wraps, earlier spy photos have previewed a completely redesigned dashboard with a lot more equipment and a big step up in terms of quality and ergonomics. We will have more details on the Scorpio-N’s interior and equipment list closer to its launch.

Do you think the sophisticated new look of the Scorpio-N is a welcome change from the rugged styling of its predecessor? Let us know in the comments below.

I think the new sophisticated look of Scorpio is a welcome move. This will ring in wide specter of customers who like big but curvy Cars/ SUV's. Large families will like it if the third row is useable and suspension issues are sorted out from its predecessor.

I think the new sophisticated look of Scorpio is a welcome move. This will ring in wide specter of customers who like big but curvy Cars/ SUV's. Large families will like it if the third row is useable and suspension issues are sorted out from its predecessor.