The new Mahindra Scorpio-N (Z101) will be revealed in full on June 27, while the older model will continue to be sold as the Scorpio Classic. 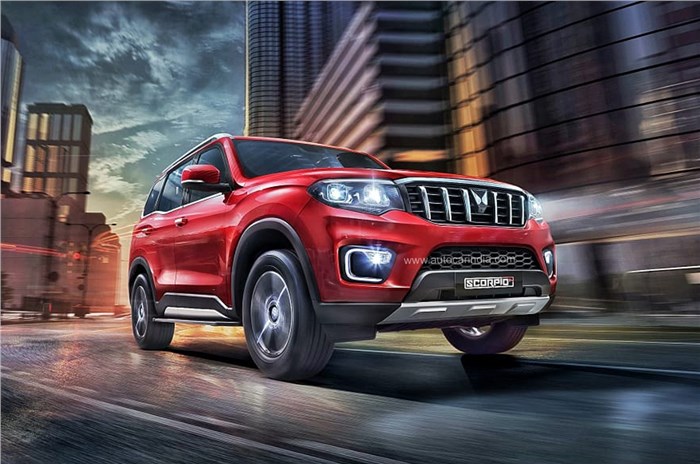 The all-new Mahindra Scorpio (codename: Z101) has finally been fully revealed in a set of official images, and it comes with a new name - Scorpio-N. The all new SUV will be revealed in full - including its brand new interior - on June 27, with a price announcement likely to follow soon thereafter.

With the new Scorpio-N, Mahindra will have have another ladder frame-based SUV in its line-up, which will include the Thar, the Scorpio Classic, the Bolero and Bolero Neo. This line-up will later be joined by the new five-door variant of the Thar.

The design of the new Mahindra Scorpio N carries on the legacy of its popular predecessors, while adding a few modern touches. Though the tall, upright and boxy shape remains, the new SUV seems to have grown in size. What has also changed is that many of the sharp edges have been smoothened out, and the character lines are far more subtly executed this time around.

The window line kicks up above the rear wheel arch and has a strip of chrome lining its base, there's more curvature to the body panels, and the black body cladding is far better executed. Big detail changes are the slimmer, more angular LED headlamp housings, and a new take on the Mahindra grille, with six bold chrome slats and the new 'twin peaks' Mahindra SUV logo.

Overall, the design revisions point to an SUV that's grown out of its utilitarian roots, and into a desirable family vehicle that can also handle a bit of the rough stuff. Mahindra, after all, said it would be aiming at the 'D segment' with the new Scorpio-N.

While not revealed in this set of official photos, the Scorpio-N's interior, as seen from earlier spy shots, will be a mix of plush materials and rugged bits. The SUV will have a large vertical touchscreen taking center stage on the dashboard, although it will not be dual-screen set-up as seen on the XUV700. Higher variants will also come with a digital instrument cluster. The switchgear will be shared with some of the newer Mahindra models like the Marazzo, XUV700 and the Thar.

Under the hood, the new Scorpio-N is expected to be powered by the 2.0-litre mStallion turbo-petrol and 2.2-litre mHawk turbo-diesel engines that already do duty under the hoods of the the XUV700 and Thar. The Scorpio’s power outputs are expected to be closer to the Thar’s than the XUV700, and the diesel engine will likely be available in two states of tune. Gearbox options will include a 6-speed manual and 6-speed torque converter automatic, with four-wheel drive and off-road driving modes likely to be offered on some variants.

There will not be any direct rival to the Scorpio in our market, thanks to its ladder frame construction. We expect that customers interested in the Tata Harrier, MG Hector Plus, Hyundai Alcazar, and maybe even the XUV700, could consider the Scorpio-N as an alternative.

What are your first impressions of the new Mahindra Scorpio-N? Let us know in the comments below.