New Scorpio to feature a digital instrument cluster and separate controls for the rear AC. 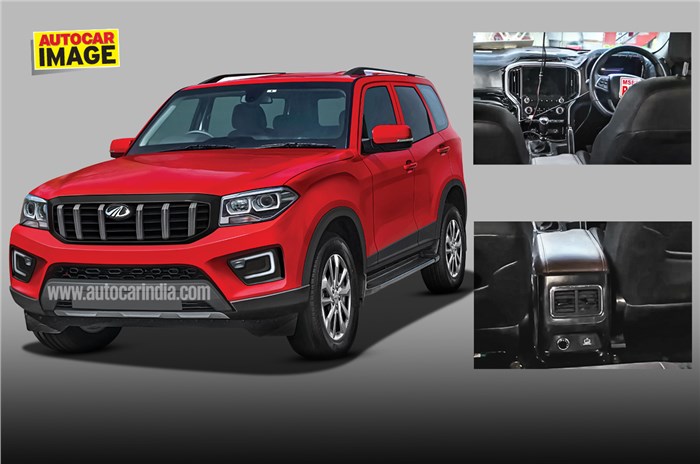 The highly anticipated new Mahindra Scorpio has been spotted undergoing testing multiple times over the past few years. The interior of the SUV was spied by us first in 2019, but it didn’t reveal many details at the time. However, a video has now surfaced on the internet that provides us with the clearest look yet of the new Scorpio’s interior.

New Mahindra Scorpio interior: what do we know so far?

The video shows a camouflaged Mahindra Scorpio test mule parked in Tabo, Himachal Pradesh, possibly undergoing cold weather testing. The most interesting aspect of the video is the clear look that it provides of the upcoming Scorpio’s interior.

The new Scorpio's dashboard layout looks similar to the Toyota Land Cruiser LC 200's. Taking centre stage on the dashboard of the new Scorpio is a large infotainment touchscreen that is flanked by AC vents on both sides. Below the screen are the controls for the infotainment and HVAC systems. Further down in the centre console are the USB ports and power outlet socket, just ahead of the gear lever. Speaking of which, the test mule is equipped with a 6-speed manual gearbox and has a conventional handbrake.

The video also confirms the presence of a digital instrument cluster and rear AC vents with separate blower controls on the new Scorpio. However, expect the digital cluster to be on offer only on higher variants, with the lower trims expected to get analogue dials.

The test car has a steering wheel that’s very similar to the XUV700’s. In fact, it is likely that several switchgears such as the steering wheel, gear lever and control stalks on the new Scorpio could be shared with the XUV700. The test mule also featured a forward facing third row of seats, in place of the side facing jump seats of the current model.

Other than that, the video doesn’t reveal more information about the interior. But expect the interior of the new Scorpio to be a lot more premium and feature better ergonomics, in comparison to the outgoing car.

The 2022 Scorpio is a new vehicle from the ground up, complete with new underpinnings. In fact, this will be the first time the Scorpio will see a full model change, since its introduction in 2002. While its boxy and upright silhouette stays similar, all body panels are completely new. Spy shots reveal a butch and muscular stance, strong character lines, a kink in the window line, a side-hinged rear door and vertical tail-lamps. The new SUV is also notably larger than the outgoing model.

The all-new Scorpio will be based on an updated ladder frame chassis that also underpins the new Thar. As such, the Scorpio is expected to share its powertrains with the Thar. The new Scorpio will likely feature the 2.0-litre petrol and the 2.2-litre diesel engine, with exact specifications likely to be revealed closer to the launch date. Mahindra is expected to offer both manual and automatic gearboxes with the engines, with all-wheel drive likely to be reserved for the top-spec variants.

The new Mahindra Scorpio is expected to launch later this year, with prices likely to overlap with the lower-spec variants of the XUV700. Mahindra will also continue selling the current Scorpio alongside the new one, as it still has a lot of demand in smaller towns and for security escorts. Once launched, the Scorpio will have no direct rivals, as there aren't any three-row ladder frame SUVs at this price point in the country.

Does the new Scorpio’s interior look enticing enough? Let us know in the comments.