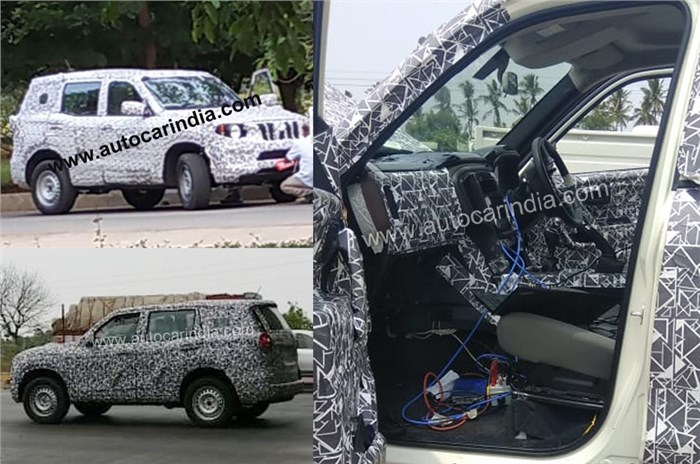 A few days ago, we brought you the first spy shots of Mahindra’s all-new Scorpio being road-tested on the outskirts of Chennai, and today, we bring you a first glimpse of the upcoming SUV’s interior.

First up, the next-gen Scorpio (Codename: Z101) features an all-new dashboard layout, which actually looks much wider than that of the outgoing model; it is also much taller. It gets provision for a large touchscreen infotainment system, which could be similar to the 9.0-inch unit that does duty in the Alturas G4. Lower trims could feature a smaller 7.0-inch unit that made its debut on the XUV300 and the Marazzo MPV. Additionally, the new Scorpio is expected to share a lot of switchgear with the Marazzo – including the steering wheel, gear knob, control stalks and even the instrument cluster – which will help keep costs in check. The new Scorpio will also feature forward-facing seats in all variants, thanks to the recent government norms.

While it is not yet confirmed whether the new SUV's interior or exterior design is influenced from Mahindra-owned design house Pininfarina, we can confirm that it was conceptualised and shaped at Mahindra's North American Technical Centre in Detroit, United States, and has been engineered and developed at the Mahindra Research Valley in Chennai.

The all-new Mahindra SUV, for the first time in its history, gets completely redesigned from the ground up and sits on a freshly updated ladder-frame chassis. The new Scorpio will feature fresh body panels and the design will have the upright silhouette that has defined the model since its first launch in 2002. A longer wheelbase is expected from the new Scorpio, which will translate into a roomier cabin. Under the hood, a fresh 2.0-litre BS6-compliant diesel engine will power the new Scorpio. This motor could churn out as much as 170hp and 400Nm of torque in top variants. Expect this motor to be mated to a 6-speed manual, with an automatic gearbox coming in at a later stage.

Key rivals to the new Scorpio in the Indian market include the MG Hector, the Tata Harrier, Kia Seltos and also future SUVs from Maruti Suzuki and Ford, along with the segment leader Hyundai Creta. It will be safe to expect that Mahindra will reveal the new Scorpio early next year, perhaps at the Auto Expo 2020.