A compilation of all the new models headed our way this festive season. 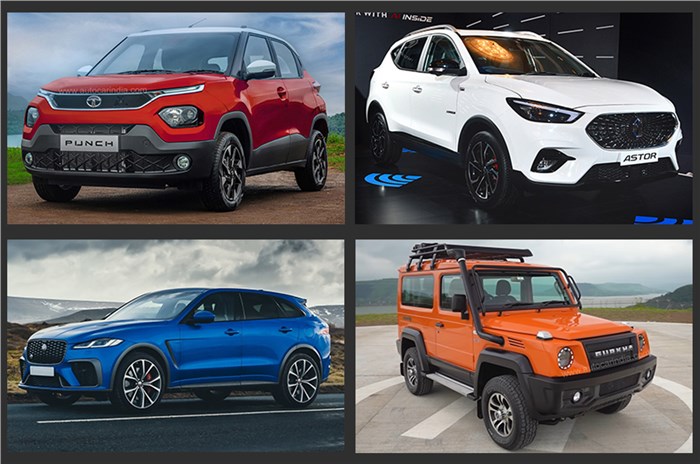 The festive season is just around the corner and carmakers are gearing up to launch a bevy of new cars and SUVs in the next few months. We have compiled a list of all the models that will hit the markets in the near future.

The new Force Gurkha was originally revealed at the 2020 Auto Expo, though the model’s launch has been significantly delayed due to the pandemic. Force finally revealed the production-spec Gurkha ahead of its launch on September 27. While the new Gurkha looks similar to the previous model, it is all-new and sits on an upgraded ladder frame chassis. The cabin, too, has received upgrades to make it feel more upmarket than its utilitarian predecessor. Power comes from a familiar 90hp, 260Nm, 2.6-litre diesel engine, paired to a 5-speed manual gearbox. You can read our review of the Force Gurkha to see how it drives.

Jaguar opened bookings for the facelifted F-Pace SVR back in June, though the carmaker has yet to announce prices for its performance SUV. Under the hood, the F-Pace SVR features a 550hp, 5.0-litre supercharged V8, which makes it the most powerful iteration of the SUV in India. Like the standard F-Pace facelift, the SVR too gets cosmetic updates like slimmer headlamps, larger grille and revised tail-lamps, along with a heavily revised cabin and updated Pivi Pro infotainment system. That aside, it also gets notably sportier SVR-specific design bits inside and out. Jaguar also says the SUV’s suspension and brakes have been tweaked for improved dynamics and feel.

MG has revealed the Astor, which is its latest offering in the midsize SUV segment, that sits below the Hector. The MG Astor is essentially a facelifted, petrol-powered version of the ZS EV SUV already sold in India. MG will offer the Astor with a lengthy features list that include a panoramic sunroof, 7.0-inch digital instrument cluster and a personal AI assistant through a robot-like device on the dashboard. One of its biggest draws, however, will be the Level 2 ADAS features which are a segment-first. Under the hood, the Astor is expected to come with a 110hp, 1.5-litre petrol engine and a 140hp, 1.3-litre turbo-petrol engine. The MG Astor is set to launch on October 7.

The Tata Punch was recently unveiled in its production-spec guise and is the carmaker’s first micro-SUV. It will be positioned below the Nexon compact-SUV. In terms of its design, both on the interior and exterior, Tata has stayed faithful to the HBX concept on which it is based. The new micro-SUV will use the same ALFA architecture as the Altroz premium hatchback with power coming from either a 1.2-litre naturally aspirated three-cylinder engine or a 1.2-litre, turbo-petrol. Gearbox choices for the Punch could include both a 5-speed manual and an AMT automatic option. The launch is expected sometime in October.

The Maruti Suzuki Celerio is going to receive a new second-gen model that features new styling and uses Maruti’s Heartect platform. We have already got a glimpse of the new Celerio courtesy of leaked spy photos that show a more rounded and minimalist overall design. Additionally, the new Celerio is set to share a lot of its mechanical components with the latest WagonR. Under the hood, expect the new Celerio to feature an 83hp, 1.2-litre petrol engine, along with the 1.0-litre three-cylinder K10 engine. The new generation Celerio is expected to be launched sometime in November.

Tata is set to roll out CNG variants of both the Tiago hatchback and Tigor compact sedan. Both cars received a facelift early last year and became petrol-only models with a sole 86hp, 1.2-litre naturally aspirated three-cylinder engine powering them. With petrol prices still soaring across India, the introduction of the CNG variant should give the models a wider appeal.

The Maruti Suzuki Swift and Dzire are two of the brand’s bestselling models. The Dzire received a subtle facelift last year with the Swift getting one earlier this year. The facelift brought with it mild styling updates and saw both models become petrol-only offerings with the introduction of the more powerful 90hp, 1.2-litre engine. The Indian carmaker is now set to roll out CNG variants of both cars in the coming months. The factory-fitted CNG kit will be paired with the existing petrol engine, though one could expect a minor drop in performance numbers on the latter. With fuel prices nearing all-time highs, the more affordable CNG fuel should have quite an appeal.

Skoda gave the Rapid midsize sedan a new lease of life last year when it introduced the facelift powered by the 110hp, 1.0-litre, TSI turbo-petrol engine. The update brought with it minor cosmetic and feature changes along with a revised variant line-up. Skoda is now looking to expand that range with a new matte edition based on the Rapid Matte Concept showcased at the 2020 Auto Expo. The new version will likely come with a matte black finish accompanied with contrast red highlights and blacked-out alloy wheels.