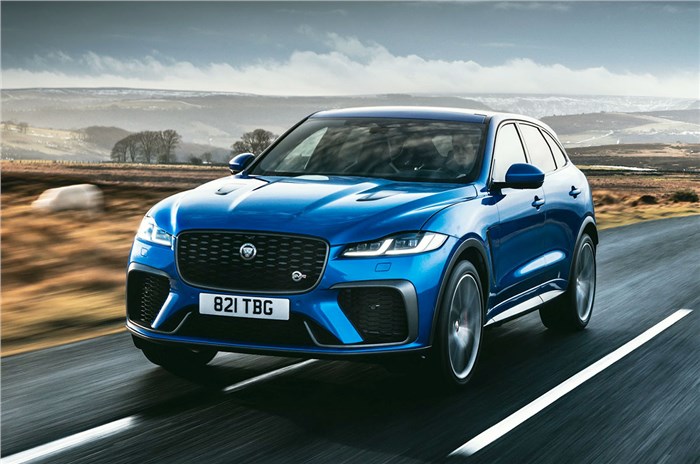 The facelifted Jaguar F-Pace SVR is set to launch in India soon with Jaguar having commenced accepting bookings for the high-performance SUV. As with the recently launched standard F-Pace, the SVR gets a number of cosmetic updates to the exterior, a heavily revised cabin along with mechanical tweaks.

The F-Pace gets much of the changes of the standard facelifted F-Pace with the new bonnet and sleeker light clusters. The SVR additionally gets model specific sportier changes like larger wheels, more aggressive bumpers.

The cabin too is in-line with the facelifted F-Pace with a heavily revised interior design that gets  a 11.4-inch touchscreen running JLR’s Pivi pro system, digital dials with SVR-specific graphics, a SVR-specific drive modes selector and variant specific trim and upholstery.

The SVR also gets mechanical updates. The 5.0-litre supercharged V8 petrol engine has been tweaked to develop 20Nm more at 550hp and 700Nm while the gearbox, still an 8-speed automatic, has been upgraded too. The SUV also gets changes to the suspension and steering for enhanced dynamics and the drive modes also get software revisions along with additional modes. The brakes too have been recalibrated.

Jaguar claims a 0.3 second quicker sprint to 100kph at 4.0 seconds with top speed also marginally up to 286kph.

For 2021, Jaguar has had two notable launches to date with the all-electric I-Pace SUV in March and the facelifted F-Pace SUV that arrived a few weeks back. The carmaker’s next launch is expected to be the facelift XF luxury sedan that debuted in global markets last year.

Sister firm Land Rover meanwhile recently introduced an updated version of the Range Rover Velar in India with additional features and a more powerful mild-hybrid diesel engine. The Discovery Sport and Evoque are also likely to receive the more powerful diesel engine in the coming months. The company is also gearing towards the launch of the facelifted Land Rover Discovery.