The new Gurkha is based on an updated ladder frame chassis and is said to meet new safety norms. 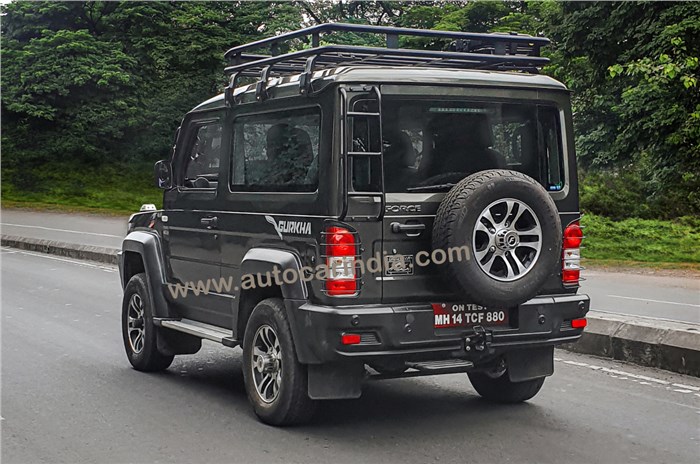 The all-new Force Gurkha is being readied for launch in the coming months. Spotted in a shade of dark green, the SUV made its debut at the Auto Expo 2020 and was originally scheduled to launch by mid-2020.

∙ New Gurkha gets revised styling and a revamped interior

∙ Will be powered by a Mercedes-derived 90hp, 2.6-litre diesel engine

New Force Gurkha: what we know so far

The upcoming Force Gurkha may look similar to the outgoing model but, it’s an all-new model. The new Gurkha is based on an updated ladder frame chassis and has been designed to meet new crash test and pedestrian protection norms. It retains the boxy shape and boot-mounted spare wheel of its predecessor but will get new bumpers, headlights with LED DRLs, revised taillamps and a new front grille. And in the same vein as the outgoing model, the new Gurkha will be offered in three and five door forms, with four-wheel and two-wheel drive versions available. The new Gurkha’s suspension will comprise of an independent front double-wishbone and a five-link, rigid-axle rear arrangement, with coil springs all around. The four-wheel drive versions will also feature low range, with front and rear axle differential locks.

The new Force Gurkha will additionally feature a revamped interior, a redesigned dashboard layout with a dual-tone interior colour scheme to give it a more upmarket feel. The SUV will also get a touchscreen infotainment system, a new instrument cluster and a digital multi-info display. The new Gurkha is also expected to come equipped with tilt-and-telescopic adjustable steering, dual airbags, ABS, rear parking sensors and power windows. In terms of seating, the cabin will feature four forward-facing seats – two individual seats in the second row – with a pair of jump seats in the boot section.

Furthermore, Force Motors will also offer a long list of customization options for the new Gurkha, in a bid to boost sales of the off-roader.

The new Force Gurkha will carry forward the outgoing model’s Mercedes-derived 2.6-litre diesel engine, albeit in BS6 guise. The engine produces 90hp and 260Nm of torque and is paired with a 5-speed manual gearbox as standard. The outgoing Gurkha Extreme’s 140hp, 2.2-litre diesel engine is unlikely to return with the new Gurkha.

The all-new Gurkha was originally slated to launch around mid-2020. However, the COVID-19 pandemic threw a spanner into the works, postponing the launch of the SUV. Force Motors also witnessed a rise in demand for its Traveller ambulance amidst the pandemic, which led to the production of the new Gurkha to be put on the back burner.

The new Force Gurkha is now expected to launch in the coming months with a price likely to be in the Rs 10-12 lakh range (ex-showroom). In terms of rivals, the Gurkha will compete with other ladder-frame based off-roaders like the new Mahindra Thar and the upcoming 5-door Suzuki Jimny.