Available as a petrol-only model for now, the BS6 Rapid is available in five variants; top-spec Rapid Monte Carlo priced at Rs 11.79 lakh. 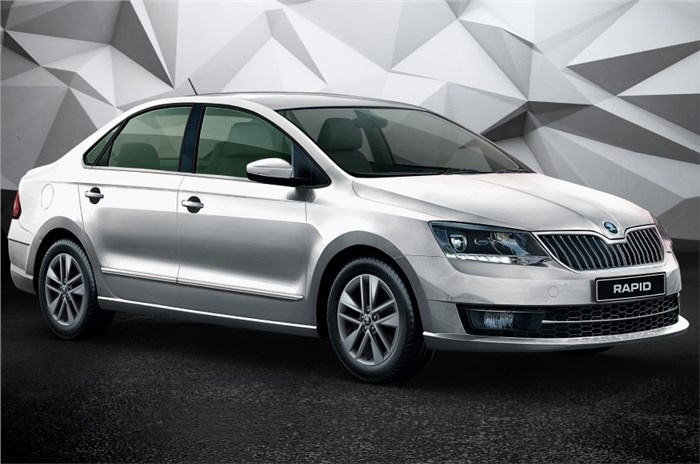 Skoda has launched the 2020 Rapid 1.0 TSI with prices starting at Rs 7.49 lakh and going up to Rs 11.79 lakh (ex-showroom, pan-India). Like its predecessor, the BS6 Rapid 1.0 TSI is available in five variants – Rider, Ambition, Onyx, Style and Monte Carlo. Bookings for the updated Rapid had begun back in mid-March (pre-lockdown), and then had resumed online for a smaller amount in April. Variant-wise prices for the Skoda Rapid 1.0 TSI are below:

The BS6 Rapid is petrol-only

The talking point of the 2020 Rapid is the new BS6-compliant 1.0-litre turbo-petrol engine which makes 110hp and 175Nm of torque. This unit will be mated to a 6-speed manual gearbox only; a 6-speed torque convertor automatic option will follow in the coming months. This new TSI engine replaces the 1.6-litre naturally-aspirated petrol unit and the 1.5-litre diesel engine from the line-up, making the BS6 Rapid a petrol-only offering. The ARAI fuel-economy of the Rapid TSI-manual is 18.97kpl.

Skoda gave the Rapid a facelift in 2016, and the same styling has been carrier over in 2020. The most prominent changes for the 2020 Rapid 1.0 TSI are new alloy wheels and a boot lip spoiler. The interiors are familiar with a design and layout that remains unchanged. Even the beige and black colour theme is carried forward on the standard variants while the Onyx gets a grey and black theme and leatherette seat covers. As before, the top-spec Monte Carlo version gets a few design changes to differentiate it from the lower variants, especially the Rapid Rider.

Some new features have been added

In top-spec form, the Rapid is now equipped with features like four airbags (up by two), ABS with EBD, a rear camera, automatic headlights and wipers, LED DRLs, 16-inch alloy wheels, leatherette upholstery, climate control, auto-dimming inside mirror, rear ac vents, cruise control and a  new larger 8.0-inch touchscreen infotainment system with Android Auto, Apple CarPlay and MirrorLink compatibility. However, Skoda missed the opportunity to equip the 2020 Rapid with features like ESP, a sunroof, LED headlamps, wireless charging and cooled seats, all of which are offered by at least one of its rivals.

Speaking of its rivals, the Skoda Rapid directly takes on the manual version of the Volkswagen Vento (Rs 8.86-11.99 lakh); it is the only other midsize sedan that comes with a force-fed petrol engine and a manual gearbox. Another rival to the 2020 Rapid is the Hyundai Verna 1.5 petrol-manual (Rs 9.31-12.60 lakh). Although there is Verna turbo-petrol on offer, it comes with a sole dual-clutch automatic gearbox (Rs 13.99 lakh). Competition also comes from the manual versions of the Maruti Suzuki Ciaz (Rs 8.31-10.08 lakh*), Honda City (Rs 9.91-13.01 lakh*) and the Toyota Yaris (Rs 8.76-12.95 lakh*), which are all available with 1.5-litre naturally aspirated petrol engines. For now, the Verna is the only competitor to be available with a diesel engine option as well.

Skoda is offering a buy now, pay in Diwali scheme, which is as advertised; the EMIs for loans taken for a Rapid bought now will begin later in the year. There's a 6-year extended warranty pack on offer for a premium called Skoda Shield Plus that includes car insurance and 24/7 roadside assistance. 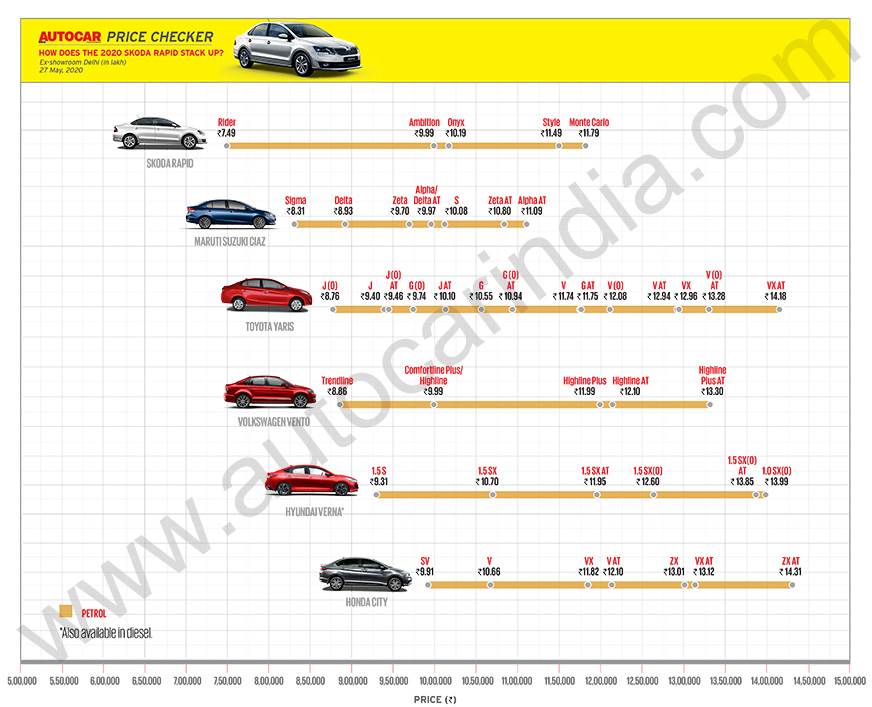