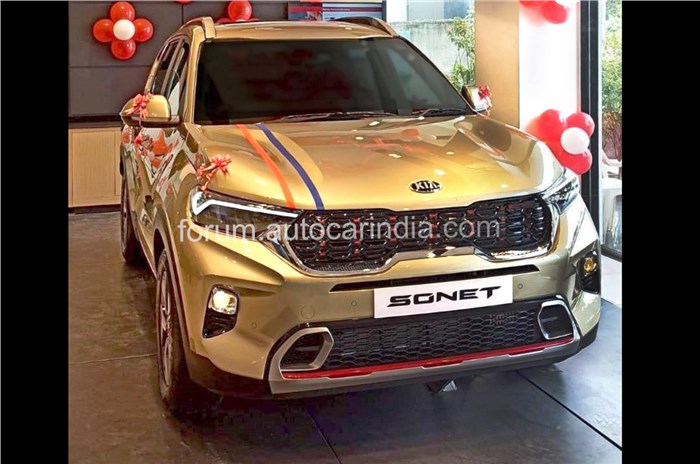 The Kia Sonet is the Korean brand's most highly anticipated launch in India this year, with prices set to be announced tomorrow and bookings well under way. Kia dealers are promising deliveries of the compact SUV as early as September 20 in most locations, depending on the availability of the variant in question.

Kia Motors India's management confirmed demand for higher-spec Sonet trims is strong, saying, "We have witnessed an overwhelming response from customers for the higher variants."

A quick check with a few dealers confirmed that the fully-loaded GTX+ automatic (petrol and diesel) is the most sought after variant in the line-up, followed by the HTK+ automatic variants.

Buyers have a choice of six variants – five in Tech Line-spec, and one in the sportier GT Line. Tech Line variants on offer include the entry-level HTE, the HTK, HTK+, HTX and the HTX+, while the GT Line is available solely in fully loaded GTX+ form.

Speaking of the GTX+, aside from the sportier touches, the fully-loaded trim gets key feature additions over the HTX+. These include six airbags, front and rear parking sensors, and wireless phone charging. Common equipment includes ventilated seats, leatherette upholstery, a 10.25-inch touchscreen, UVO connected-car tech, LED headlamps and more. Engine options on the Sonet GTX+ include a 1.0-litre petrol and a 1.5-litre diesel; both have manual or automatic gearbox options. The diesel is available with either a 6-speed manual or 6-speed torque converter automatic, while the turbo-petrol engine is paired with either the unique 6-speed 'clutch-less manual' gearbox or a 7-speed dual-clutch automatic.

According to our survey, the Glacier White colour is popular in Tier-II cities. In metros, it’s the dual-tone Intense Red and Beige Gold that is among the most highly sought after, along with the single-tone Gravity Grey.

The Kia Sonet will rival the Hyundai Venue, Tata Nexon, Mahindra XUV300, Ford EcoSport and Maruti Suzuki Vitara Brezza in the hotly contested compact SUV segment. The segment will also soon see the arrival of the new Vitara Brezza-based Toyota Urban Cruiser. Also on the cards is the Nissan Magnite and its sister model, the Renault Kiger, both of which are likely to arrive by next year.