How does the recently launched Kia Sonet compare against rivals like the Hyundai Venue, Mahindra XUV300, Tata Nexon, Maruti Vitara Brezza and Toyota Urban Cruiser? We find out. 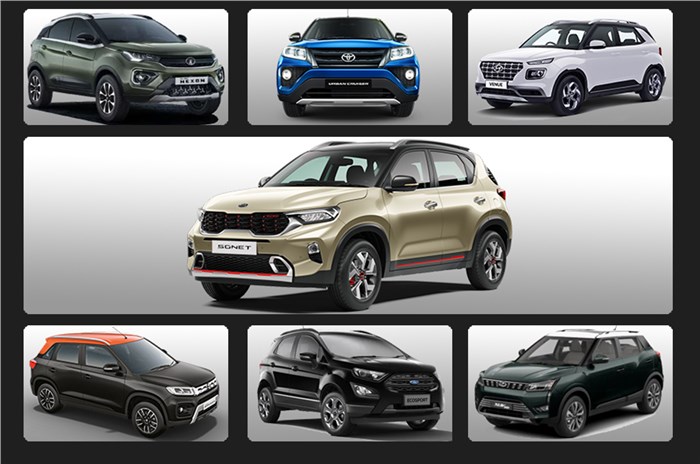 The Kia Sonet and the Toyota Urban Cruiser are the latest additions to the hugely popular sub-four-metre SUV segment. The Sonet, which is priced from Rs 6.71 lakh to Rs 11.99 lakh (ex-showroom, India), and the Urban Cruiser – Rs 8.30-11.30 lakh (ex-showroom, Delhi) – join the likes of the Ford EcoSport, Maruti Suzuki Vitara Brezza, Tata Nexon, Mahindra XUV300 and the Hyundai Venue in this fiercely competitive segment. Including the newest additions, the Sonet and the Urban Cruiser, there are now seven compact SUVs to choose from.

We’ve put the Sonet and Urban Cruiser up against their current rivals to see how they fares on price, power, mileage and specifications.

Despite sharing its underpinnings with Hyundai’s Venue, the Kia Sonet is larger on some aspects than its cousin. It is also class-leading on two aspects – the Sonet has the largest boot, 40litresmore than the Ford EcoSport, with which it also equals in height. In terms of width and wheelbase, the Sonet sits in the middle of the pack. The Mahindra XUV300 is the widest sub-four-metre SUV and has the longest wheelbase too, which bodes well for the interior room on offer. The Mahindra is the only model here to get 17-inch alloy wheels; the rest have 16-inch wheels. However, the XUV300 does have the smallest boot by quite a large margin. The Tata Nexon’s wheelbase is shorter by a minimum of 2mm than its rivals, while the Hyundai Venue has the lowest height.

As the Toyota Urban Cruiser and Maruti Suzuki Vitara Brezza are badge-engineered models, they have identical figures. While they aren’t the largest or the smallest of the lot, the 328-litre boot is on the smaller side in this segment.

The Toyota Urban Cruiser and Maruti Vitara Brezza are mechanically identical – they both have some of the lowest output figures among the seven compact SUVs and are the only ones that get a mild-hybrid system, albeit with just the automatic transmission option. The Sonet and Venue 1.2 petrols have the lowest figures, though their respective turbo-petrol versions are among the most powerful. The Ford EcoSport’s engine may not have forced induction but has the highest horsepower rating. Meanwhile, the XUV300’s unit develops the most torque. With the facelift, the Nexon petrol also got a small boost in power – it now equals the Sonet and the Venue. However, its torque figure has remained the same.

Of the petrols, besides the XUV300, all have an automatic option. Hyundai offers a total of four gearbox options – one for the 1.2 petrol, and three with the 1.0 turbo-petrol, including the newly introduced ‘clutchless manual’ transmission (iMT). This unit is also available with the Sonet, though the Kia’s 1.0 turbo engine does not get a standard manual gearbox.

When it comes to ARAI fuel-efficiency figures, the Kia Sonet in 1.2 petrol-manual form is the most fuel-efficient; it’s closely followed by the 1.0 turbocharged petrol-manual Sonet. Despite sharing its powertrain with the Sonet, the Hyundai Venue’s mileage figures are lower. The Urban Cruiser and Vitara Brezza are the most fuel-efficient automatic compact SUVs, thanks to the mild-hybrid tech on offer. The XUV300 and Nexon petrols are on even footing, while the Ford EcoSport sits at the bottom of the fuel economy table.

Toyota and Maruti Suzuki don’t offer a diesel engine option with their respective sub-four-metre SUVs, but it onlyplaces them at a smaller disadvantage than you might think, as demand in this segment is skewed toward petrols.

In terms of output, the Mahindra XUV300 diesel is the most powerful, though it’s also the least efficient. What’s interesting is that the Sonet diesel-automatic is slightly more powerful than its manual counterpart and comes in second on horsepower, but the Nexon diesel has a bit more torque. The Venue diesel, which is only on offer in manual guise, and the Sonet manual are more powerful than the EcoSport.

As with the petrols, the Sonet diesel-manual’s mileage figure is 0.8kpl higher than the Venue’s, making it the most efficient diesel compact SUV. The Sonet diesel-auto uses a relatively inefficient torque converter unit, which results in a 19kpl ARAI rating. However, expect a more sophisticated driving experience than the Nexon diesel-AMT and XUV300 diesel-AMT, which may be relatively more frugal.

Kia Motors India has priced the Sonet quite competitively. The introductory prices see the Sonet petrol-manual undercut five out of six compact SUVs currently on sale – only the entry-level Venue is more affordable. However, the top-end petrol Sonet GTX+ – in manual and automatic form – is priced quite a bit above the competition; the top-spec EcoSport, which is the second most expensive manual sub-four-metreSUV, costs Rs 77,000 less. Top-spec Sonet automatic prices are also Rs 19,000 more than the Tata Nexon AMT.

For now, the Sonet is the most affordable diesel compact SUV. In fact, as Sonet diesel and turbo-petrol prices are near-identical – something that’s never been seen before in this segment – Kia’s compact SUV comes across as well-priced; especially in lower-spec automatic form. The top-spec variants boast a long list of equipment, but their prices do encroach into the mid-size SUV segment.

The Toyota Urban Cruiser has the edge over the Maruti in terms of the standard warranty period, but both Korean brands better that.

On paper, the Kia Sonet seems to have what it takes to become the sales champion of the segment. The Toyota Urban Cruiser also seems to have a lot to offer. Only time will tell if this holds true.