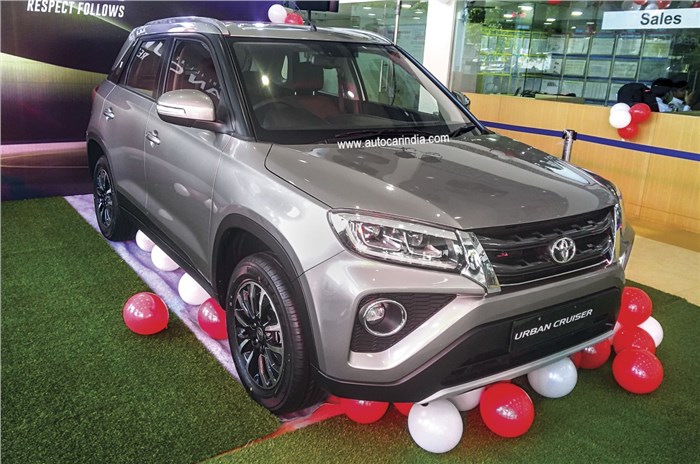 While bookings for the compact SUV had already begun prior to the launch, Toyota dealers are expecting display and test-drive units only in early October and are promising deliveries later this month by Dussehra.

The Urban Cruiser has been launched in three trims – Mid, High and Premium – with each variant offering the choice of manual and automatic transmissions. A quick check with the dealers reveals that the top two variants of the Urban Cruiser are getting more traction, with the automatic option also getting a lot of bookings. As far as exterior paint shades go, the Urban Cruiser gets six single-tone and three dual-tone options. And it’s no surprise that the dual tones are preferred, as Toyota is offering them at the same price as the single-tone shades. Our Toyota Urban Cruiser price, variants explained report has more on what features are on offer with each trim.

The Urban Cruiser shares its running gear with its Maruti Suzuki sibling and is powered by a 105hp, 138Nm petrol engine. The 1.5-litre, four-cylinder, naturally-aspirated unit comes mated to either a 5-speed manual or a 4-speed torque-converter automatic gearbox. The automatic version also benefits from Suzuki’s fuel-saving mild-hybrid tech. Our Maruti Suzuki Vitara Brezza petrol review will give you an idea of what to expect in terms of performance and driving dynamics.

The Urban Cruiser, in addition to the Brezza, faces stiff competition from the Ford EcoSport, Mahindra XUV300, Tata Nexon, Hyundai Venue and the recently launched Kia Sonet. Soon, it will also have to contend with the Renault Kiger and the Nissan Magnite, which are slated to arrive early next year.