Want to know which carmakers had which models on display? Our comprehensive guide has the details and links for all the information you need. 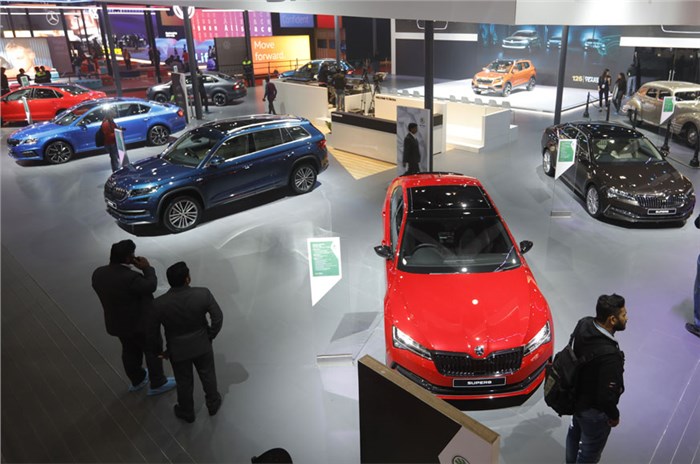 While some may say that motor shows are losing steam, one look at the extensive line-up on display at the 15th edition of the Auto Expo says otherwise. It is true that manufacturers such as Honda, BMW, Toyota, Ford, FCA, Jaguar Land Rover and Volvo skipped Auto Expo 2020, however, those who've participated this year have come in strong. There were zany concepts, future-ready products, global unveils, a few important launches, and even some cool motorsport displays. Here’s a brief guide on the most important exhibits at Auto Expo 2020:

The highlight of Force Motors’ stall at Auto Expo 2020 is the all-new Gurkha. The next-gen Mahindra Thar rival is grounds-up new, but one wouldn’t know that at a cursory glance. It’s got the traditional retro look but there are more than a few cosmetic changes. It also gets much more equipment, a renewed focus on cabin comfort, and a more powerful BS6-compliant engine. Prices will be revealed in May.

The Chinese brand has quite an extensive display. There are loads of SUVs from its Haval sub-brand including the midsize Concept H which made its world premiere at the 2020 Auto Expo; the full-size H9, the brand's aspiration for the future with the Vision 2025 concept; the F5 and F7, and the ORA R1 EV. The first model from Great Wall Motor will only arrive sometime next year.

Along with revealing prices for the much-anticipated Carnival MPV (Rs 24.94-33.95 lakh), Kia also has its compact SUV concept, the Sonet, on display. The Korean brand’s Auto Expo pavilion also drew crowds due to the beefy-looking Seltos X-Line concept, the all-electric Soul EV and e-Niro, the Xceed and Stonic crossovers.

Another Chinese carmaker looking to make it big in India, FAW-owned Haima confirmed its India entry in 2022 with the E1 EV. Besides the all-electric urban runabout, which is expected to be priced around Rs 10 lakh, Haima also has its midsize 8S SUV and the radical-looking 7X MPV to gauge response.

Hyundai is one of the brands that has quite a large contingent at the Auto Expo. While the reveal of the all-new, second-gen Hyundai Creta was the Korean carmaker’s biggest highlight, also revealed was the facelift for the Tucson and the sportier Grand i10 Nios Turbo; prices for both are expected to be revealed in the coming weeks. There was also the performance-oriented i30 N Fastback, which is being evaluated for an India launch, the futuristic Le Fil Rouge concept that previews future Hyundais, as well as the Elevate and Kite concepts.

In order to present itself as a future-ready company, Mahindra revealed prices for what is now the most affordable EV in India – the eKUV100. The Mahindra eXUV300 also made it to the company’s stand, though the visual and technological highlight was definitely the Funster concept. This open-top EV packs in a 313hp electric motor and has a claimed 0-100kph time of under 5sec. Mahindra also took the opportunity to reveal its all-new petrol engine line-up. With capacities ranging from 1.2 to 2.0 litres – and outputs ranging from 130 to 190hp – these new mStallion family engines feature direct-injection and a turbocharging, and will be used in a number of future cars and SUVs.

From Maruti’s massive 17-car line-up at the Auto Expo, the model that undeniably draws the largest crowds is the Futuro-e concept. This striking SUV-coupé concept previews a midsize SUV from Maruti Suzuki that will take on the likes of the second-gen Hyundai Creta and the Kia Seltos when it arrives. The two other big reveals by Maruti were the facelifts for the Vitara Brezza compact SUV, which now gets petrol-power, and the Ignis. The brand’s entire India line-up – including the now petrol-only S-cross – is also on display. Other notable models alongside the all-electric Futuro-e include Suzuki’s Swift Hybrid, Jimny off-roader and Maruti’s S-Presso S-CNG.

The only luxury carmaker to participate in the 15th Auto Expo, Mercedes revealed prices for two new models for India – the AMG GT 4-door coupé in its range-topping 639hp 63S guise and the V-class Marco Polo MPV, which is available in two variants. Mercedes-Benz also has the A-class sedan in AMG A35 form on display, and has showcased the next-generation of the GLA SUV in India for the first time.

Along with battery electric vehicles like the extra urban E200 EV and the autonomous (and 5G connected) Marvel X SUV, MG Motor India has a rather large selection of sedans, SUVs and MPVs at the show. Part-sedan, part-coupé and part-crossover, the MG RC 6 is a unique model expected to launch in India by March 2021. There are two MG MPVs on display as well – a potential Maruti Ertiga fighter (the 360M), and a potential Kia Carnival rival (the G10). The brand’s flagship SUV, the MG Gloster, also made its India debut, before its launch during the upcoming festive season. The MG Hector Plus – which comes in 6- and 7-seat layouts – the race-ready 6 xPower and the MG3 hatchback are also on display.

French carmaker Renault is showcasing quite a few models that will launch in the India soon. The AMT-equipped Triber did garner significant interest, though the all-electric K-ZE and Zoe were a bit more electrifying. The icing on Renault’s cake is the Duster with a new 1.3-litre turbo-petrol engine that makes 156hp and 250Nm of torque. This new Duster will arrive at Renault showrooms by April. The French brand also has the Twizy Cargo EV and the Symbioz concept at its stand.

From the near-production version of the H2X that debuted as the Tata HBX, and the reborn Sierra EV, to revealing prices for the BS6-compliant Harrier with an automatic option, Tata is on a roll at the 15th Auto Expo. The brand also confirmed that the Gravitas 7-seat SUV will launch by the festive season, and also previewed the BS6 Hexa, which had the Safari Edition badge.

The most important Skoda at the Auto Expo is the Vision IN concept, which previews a heavily localised future midsize SUV that’ll rival the Hyundai Creta and Kia Seltos. The Czech brand also revealed its new BS6-compliant all-petrol line-up – the Rapid 1.0 TSI, the Superb facelift, the Karoq SUV and Kodiaq 7-seater – will arrive soon in Skoda showrooms near you this year. The ballistic Octavia RS245 is also now on sale at Rs 35.99 lakh.

If you’d like to know what Volkswagen’s new midsize SUV will look like, the close-to-production Taigun concept on display will give you a fair idea of what to expect. The German company also confirmed that the production-spec I.D. Crozz – an all-electric SUV concept that’s being showcased – will be VW’s first EV for India. Volkswagen also has two soon-to-launch CBU SUVs on display – the 7-seat Tiguan AllSpace and the distinctive T-Roc – along with the 2020 Polo Cup race car.