First India 2.0 model will come with 90 percent localisation, but Skoda boss Bernhard Maier is targeting 95 percent, which is possible if gearboxes are locally manufactured. 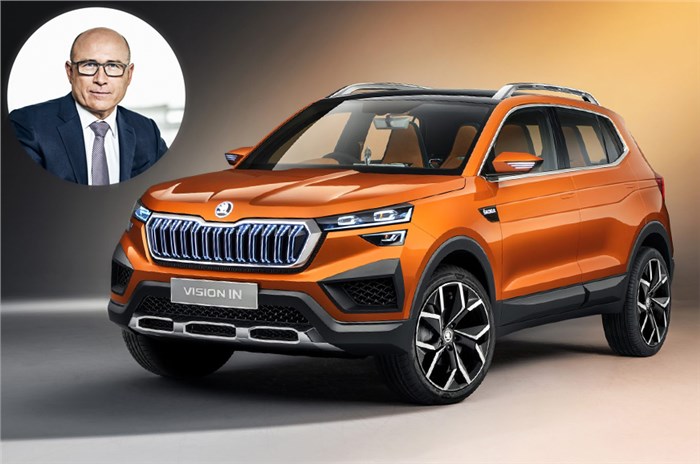 On the eve of the 2020 Auto Expo, Skoda revealed the Vision IN concept, which, according to Skoda Auto’s global CEO Bernhard Maier, “is 90 percent of what the production car will look like”. Based on the Volkswagen Group’s global A0 platform, this midsize SUV, the first model under ‘India 2.0’ – a buzzword coined for Skoda Auto Volkswagen India’s ambitious revival plan – will be almost entirely manufactured in India and launched in the first half of 2021 with a local content level of over 90 percent.

However, to meet the tough cost targets, an even higher level of local content may be necessary to further reduce the number of imported components and the customs duty they attract. Maier is now pushing for 95 percent localisation, but to achieve that the transmission would need to be localised too. “One of the decisive issues that we have to conclude is to find out how feasible it is to localise the transmission – not only one gearbox, but probably more than one. If that is something that is turning out to be positive, then we are on the course to go 95 percent,” said Maier. He also added that they have found competent suppliers in India and are thus very confident of maintaining their global quality levels.

The key for localisation, however, is volumes, and though Skoda Volkswagen Auto India has the required installed capacity (2,00,000 units per annum ) in the Chakan plant, which it recently took over from Volkswagen India, it may not all get mopped up by domestic demand. Hence, the company is looking at exports actively to utilise as much capacity as possible. “Of course, the project is only profitable when we are able to use the full capacity. If the Indian market is not absorbing everything we are producing here, we have to export outside India, and this is precisely how we set up the project and it’s working on the right path.”

Setting up a line to manufacture transmissions is hugely costly, and to justify the investments, a volume of at least 2,00,000 gearboxes is needed. However, the volumes or the supplier base needed to locally produce the transmission is not the challenge here. Currently, the Volkswagen Group already has many plants globally producing gearboxes; so adding one more isn’t easy to justify, especially when the industry and the Group itself are actively heading towards electric cars, which do not have traditional gearboxes.

Skoda Auto Volkswagen India is also studying the alternate gearboxes to replace the DSG or twin-clutch gearbox which Volkswagen pioneered. With a firm grip on costs, more affordable and robust solutions like the 6-speed torque converter (seen on the Skoda Rapid), or even a CVT are being considered.

Clearly, Skoda is taking a pragmatic approach and looking at all options, even if it means sacrificing holy cows like the DSG to make its India 2.0 cars more accessible to the market.

Maier is confident of achieving a combined 5 percent market share for Skoda and Volkswagen, which translates to around 1,70,000 units per year. Currently, the combined market share stands at a little under 2 percent.