Bold-looking Skoda Vision IN concept gives a glimpse of production-spec midsize SUV to launch next year; to be first model built on the VW Group’s India-specific MQB A0 IN platform. 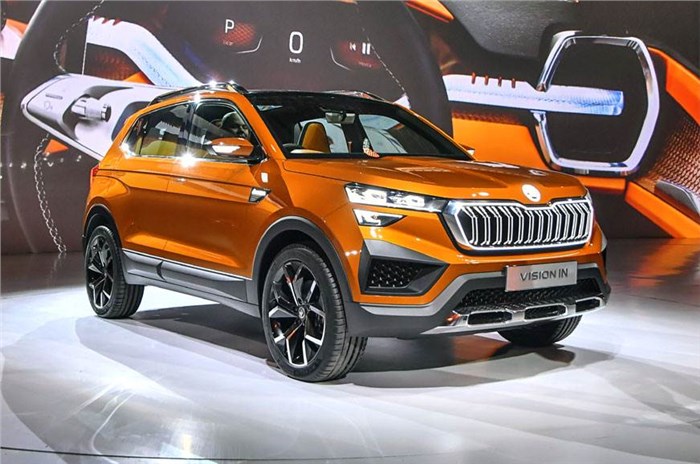 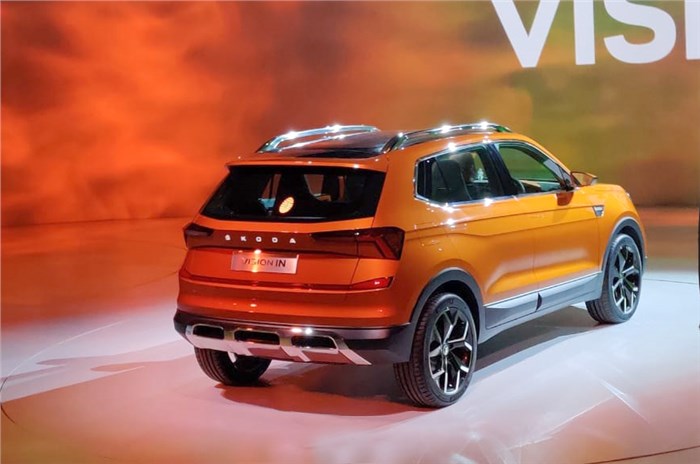 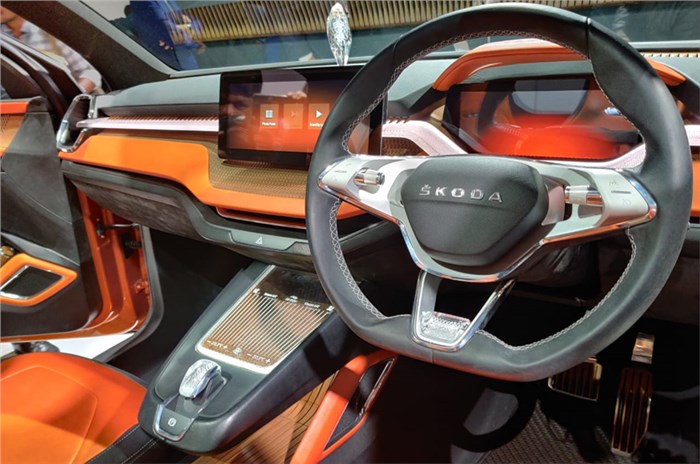 After a quiet few years in India, the Volkswagen Group – Volkswagen and Skoda, in particular – are ready to make a big splash in the market. One of the most important among several unveils at today’s Skoda Auto Volkswagen India Media Night was that of the Skoda Vision IN concept, which made its world premiere in New Delhi. While the Vision IN is a Skoda product, it is of prime importance to the VW Group at large. The production-spec model will be the first to be launched under the Group’s India 2.0 project; it will also be the first model to be built on the company’s brand-new, tailored-for-India, MQB A0 IN platform. The Vision IN previews a midsize SUV to rival the Hyundai Creta and Kia Seltos here and mark Skoda’s entry into one of the Indian market's most lucrative (and competitive) segments.

As the design sketches had previously hinted, the Skoda Vision IN concept provides a glimpse of a handsome, bold-looking SUV. The Skoda Vision IN’s face echoes the design of the Kamiq sold abroad; but it has a bolder, more upright nose, with the trademark chrome-embellished Skoda grille flanked by split projector headlights and the angular bumper featuring large air intakes and a three-slot skid plate. Other notable design elements include plastic cladding all around, prominent roof rails and large 19-inch alloy wheels befitting a concept.

At the back, too, the Skoda Vision IN has a lot in common with the Kamiq in terms of design, with its crystal-like LED tail-lights. The concept also sports an additional light strip that spans the width of the SUV as well as a three-slot skid plate, similar to the one at the front. Size-wise, the Skoda Vision IN SUV concept measures in at 4.26m in length – roughly the same length as the outgoing Hyundai Creta.

As for the Skoda Vision IN’s interior, it features a number of elements that are now becoming common across all new Skoda models. The layered dashboard is bound to draw a lot of attention. A thin chrome bar spans the length of the dash and connects the large, chrome-lined vents at each end, accentuating them. Skoda has also used orange liberally to liven up things on the inside – parts of the dash, door panels, centre console and front armrest finished in orange.

A large, free-standing 12.3-inch touchscreen infotainment system takes centre-stage, right next to the Virtual Cockpit digital instrumentation. An interesting addition is what Skoda calls a ‘crystalline element’ placed atop the dash. There are also knurled scroll wheels placed on the flat-bottom, three-spoke steering wheel, along with buttons for phone controls, voice commands (Skoda calls it a 'digital assistant'), lane assist and cruise control. There is a small gear lever for the automatic transmission positioned centrally on the compact centre console. Features expected on the production version of the Skoda Vision IN include automatic climate control, a panoramic sunroof, rear AC vents, USB charging ports at the rear, drive modes, ambient lighting and more. We can also tell you that the production-spec Skoda Vision IN SUV will have a 2,671mm-long wheelbase, and plenty of space for rear-seat passengers.

Powering the Skoda Vision IN is a 1.5-litre, four-cylinder turbo-petrol engine that makes 150hp and 250Nm of peak torque. Power is sent to the front wheels via a 7-speed dual-clutch automatic gearbox. Skoda claims the concept does the 0-100kph sprint in 8.7secs and has a top speed of 195kph. There won't be any diesel engine option with the production-spec model, but a CNG variant could be on the cards.

It has previously been confirmed that the production-spec Skoda Vision IN SUV’s India launch will take place sometime between April-June 2021, well before Volkswagen launches its own MQB A0 IN-based Taigun SUV. By the time it arrives in showrooms, the Skoda Vision IN’s list of rivals will include its cousin from the VW stable, the next-gen Hyundai Creta (set to be showcased at Auto Expo 2020 on February 6), the Kia Seltos, MG Hector, the all-new Mahindra XUV500 and Maruti Suzuki’s upcoming midsize SUV.

The brand has also announced that it plans to have 200 sales and service touchpoints across 150 Indian cities by 2023.

What do you think of the Skoda Vision IN concept’s design? Let us know in the comments.