The Volkswagen Taigun has been shown in near-production-ready guise; will go on sale in India in the second half of 2021. 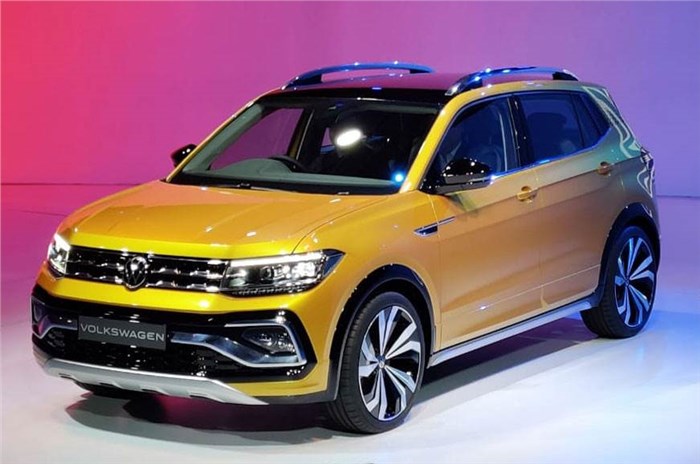 Volkswagen has long-considered a mass-market SUV for India. However, the projects didn’t prove feasible and resultantly, VW couldn’t cash in on the craze for body style. The Volkswagen Taigun SUV concept, shown in the run-up to Auto Expo 2020, is a statement that the carmaker is ready to take the plunge and fight it out in the ultra-competitive midsize SUV space.

The final production model will be closely related to Skoda’s own midsize SUV for India, revealed as the Vision IN concept, and will follow its cousin into the market in the latter part of 2021. Together the duo of SUVs will be the first products to be based on Volkswagen’s India-specific MQB A0 IN platform that will also form the basis of a new range of models to come.

While Volkswagen is calling the Taigun a concept, it’s only a lightly veiled version of the actual model for sale. The Taigun’s design has much in common with the international T-Cross SUV, though the car for India is longer, with rear-seat space and comfort getting due importance in the engineering project. The 2,651mm wheelbase is a good 100mm longer than the Euro-spec T-Cross’. Its 205mm of ground clearance is also unique for India.

Design elements have been tweaked for India. The bonnet gets a more angular look and, in line with Indian tastes, there’s a generous use of chrome on the grille and bumpers. The concept also wears flashy rims but you can expect the production model to sit on smaller wheels. LED tail lamps that are linked by an LED light bar give the Taigun’s tail some distinction. In all, the neat and clean lines mean the Taigun won’t be mistaken for anything but a Volkswagen.

On the inside, the Volkswagen SUV sports a multi-layer dashboard that positions the touchscreen infotainment system high up, and in line with the all-digital instrument cluster. The general layout is neat but what could be a bigger point of distinction is the high level of fit and finish. There’s a good, solid feel to all controls and a built-to-last feeling to everything on the inside. First impressions of the all-important rear seat are fairly positive. There’s reasonable, if not class-leading legroom, but the concept's relatively narrow cabin means sitting three abreast is a bit of a squeeze.

VW intends to be ahead of the curve in terms of features. A digital instrument cluster, large 8.0-inch touchscreen and connected tech are things you can expect on the final product. The VW SUV will also be loaded with safety equipment and it’s reassuring to know the closely related Latin America-spec Volkswagen T-Cross received a 5-star safety rating from Latin NCAP.

The production-spec Taigun will be powered by a 130hp, 1.5-litre, four-cylinder, turbo-petrol engine. The tech-laden engine comes with cylinder-deactivation tech and could set the benchmark for economy in the segment. What could be a spoiler for many, however, is the absence of a diesel engine option. Still, VW is looking at a CNG option for buyers looking to minimise running costs.

While Volkswagen’s models have always been priced at the higher end of their respective segments, things will likely change with the production-spec Taigun. The VW Group has embarked on a widespread cost-rationalisation program and the strong focus on localisation under the India 2.0 project should reflect in the keen pricing for this SUV. VW is also working to increase its footprint in India with more touch points including single display formats.

As things stand, there's still a long wait to tell you if said long wait for a Volkswagen SUV has been worth it.