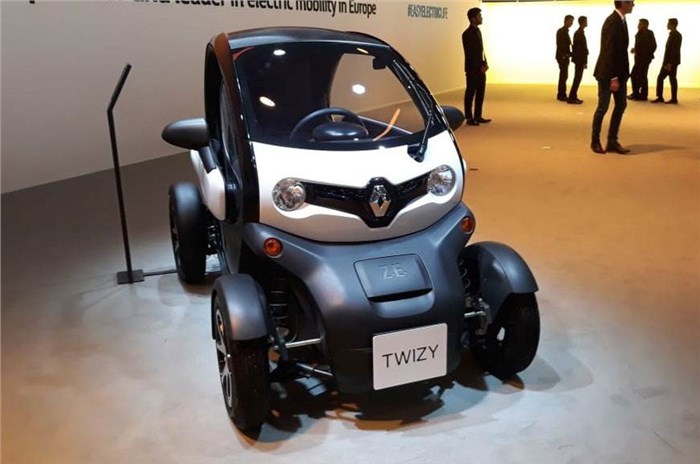 The all-electric Renault Twizy has just been showcased at Auto Expo 2020 in its single-seater Cargo guise. This is the first time the Twizy has made an appearance in India, and is one of the EVs displayed by the French carmaker at this year’s Expo. Though, unlike other electric models Renault has brought to the Expo, the Twizy is aimed more toward customers looking for a compact personal electric mobility solution.

When compared to other EVs, the power figures of the Twizy Cargo might not seem impressive as its rear-mid-mounted electric motor only produces 17hp and 57Nm of torque, with power being sent to the rear wheels. Although, if we take into consideration the Twizy’s compact dimensions, its 474kg kerb weight, and the fact that it is essentially a quadricycle, the output figures make much more sense. Renault has equipped the Twizy with a 6.1kWh lithium-ion battery pack that the carmaker claims is good for a 100km range.

In terms of style, the Twizy sports a fairly streamlined design, with a steeply raked windscreen, narrow body and windowless rear with a high-mounted tail-light. It also gets a panoramic sunroof and windowless ‘Vanity’ scissor-style doors as an option. Its interior has a very minimalist layout, with tandem-style seating, and a single digital display on the dashboard that serves an instrument cluster and MID.

Renault is not likely to launch the electric Twizy in India, and has shown it more as a concept of what city-centric personal mobility and last mile connectivity would look like.