Part sedan, part coupe and part crossover, the MG RC 6 will be a new, distinctive addition to MG’s line-up. 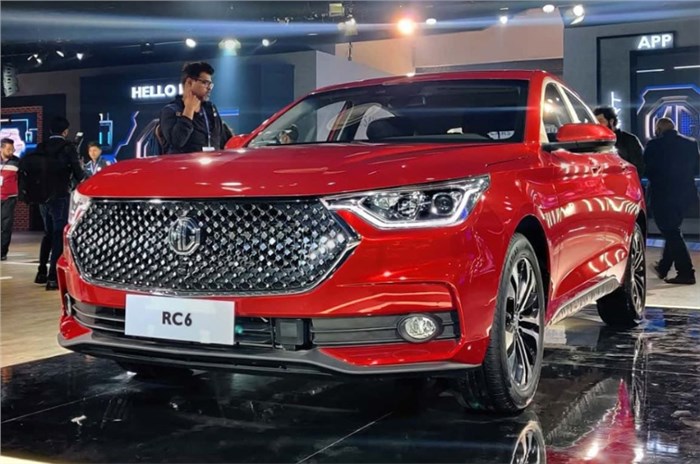 MG Motor is out in full force at Auto Expo 2020; but perhaps the most curious inclusion on display is the new RC 6 sedan. Based on MG’s sister brand Baojun’s RC6 sedan and badged an MG for the first time, the RC 6 is best described as a cross between a coupé, SUV and sedan.

The shape isn’t conventional. It's a three-box sedan with a slant-back profile – reminiscent of the BMW 3 Series GT –making it appear coupé-esque. On the other hand, the relatively high ground clearance of 198mm is more SUV than sedan. The running boards between the front and rear wheels not only emphasise the RC 6's SUV pretensions but also draws your attention to the 2,800mm wheelbase; which is just 41mm shy of the Skoda Superb’s, for instance. From nose to tail, the MG measures 4,925mm making it a substantial vehicle. Like other MGs, the RC-6 is big on bling, with lots of shiny elements and chrome detailing on the grille.

The MG is more conventional in its interior layout but the dual-screen interface – one for the instruments and one for the touchscreen – is sure to find favour with tech-savvy buyers. Connected features will be among the on-board gizmos.

Under the hood, the RC 6 sedan will be powered by a 1.5-litre turbo-petrol engine similar to the one seen on the Hector. There will be a mild-hybrid variant as well and MG’s new 2.0-litre diesel could find use here too.

According to sources, this new sedan will hit MG India showrooms by March 2021 and be aggressively priced. The company could tweak the car’s interior and feature list after gathering prospective customer feedback from its display at the ongoing 2020 Auto Expo.

It might not be for everyone, but the MG RC 6's combo of sedan comfort and SUV ground clearance could make it a smart fit in the Indian market.