All-electric Zoe hatchback features a 134hp/ 245Nm electric motor that draws charge from a 52kWh battery pack. The carmaker is looking to launch the EV in India in 2020-21. 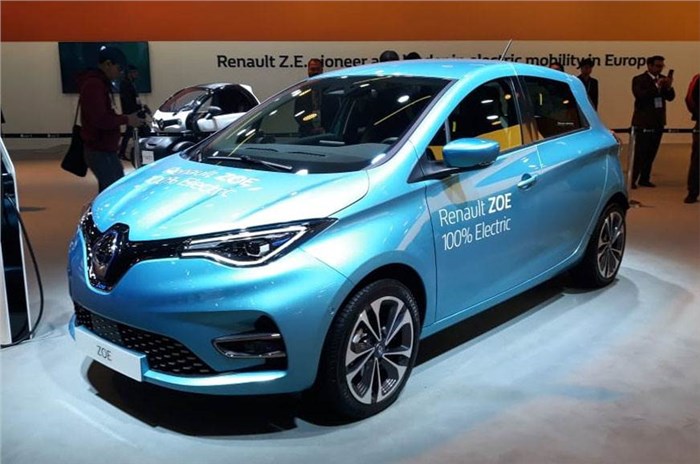 The Renault Zoe EV has made its quiet return to the Auto Expo 2020.  The EV hatchback was shown earlier at the 2018 edition of the Auto Expo as well. Renault is keen to bring the model to India and is looking at a launch in 2020-2021. The car is already undergoing testing in our country and will be tweaked for our market. Among the changes for India will be the ones to the underside of the battery pack, which will be reinforced to protect against damage on speed breakers.

In terms of battery options, Renault is expected to offer the Zoe with a sole 52kWh setup, which will power a 134hp/ 245Nm electric motor. In this configuration, the Zoe weighs around 1.5 tonne. Although heavy, the Zoe promises zippy performance and also more than adequate range, which is rated at 395km (WLTP). The battery can be charged from 0-70 percent in 55 mins via a 50kW DC fast charger.

On the design front, the Zoe gets a larger Renault logo (behind which lies the charging port), sleek LED lights, and an overall neat and uncluttered design; comparisons can be drawn with the styling of the larger Clio hatchback sold internationally. The interior too has a neat layout, with the vertically-oriented 9.3-inch display taking centre stage. It also gets other features like a digital instrument cluster, push button start/stop, automatic climate control and more.

Renault is evaluating the assembly of certain components in India to bring prices down. Even so, the Zoe will be expensive for its size, with an expected price in the region of Rs 14-16 lakh.