The popular SUV’s second generation is expected with three engine options when it launches in mid-March 2020. 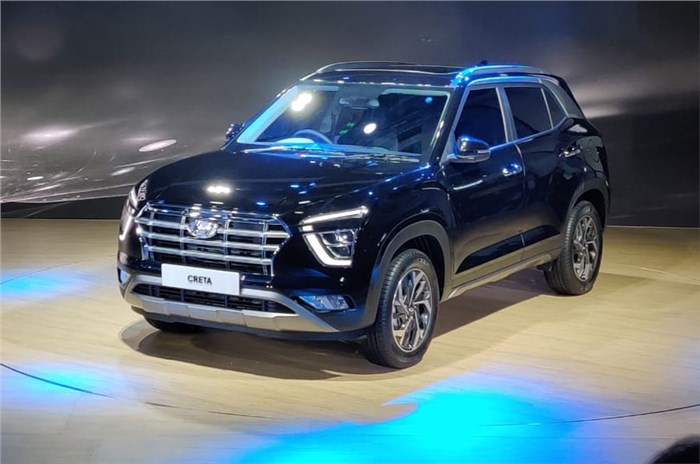 Hyundai has taken the covers off the India-spec, second-generation Creta SUV at Auto Expo 2020. Revealed as the new-generation ix25 in China last year, the new Creta not only comes with revamped exterior and interiors but will also come with a new BS6-compliant engine line-up.

The Hyundai Creta gets a radical new design that’s a sharp departure from the outgoing model’s ‘please all’ appearance. Hyundai’s cascading grille is the focal point at the front but it’s the headlight arrangement that could polarise opinion. The split headlight arrangement comprises a slit-like LED DRL on top with the main cluster – also lined by an LED strip – positioned lower down. The headlight cluster is made of a LED headlights with new-look fog lamps below. A scuff plate at the base of the bumper is also included.

Squared-out wheel arches add muscle to the Creta, though the angular glasshouse does link the new SUV to the outgoing model. Dual-tone paint has been used to good effect, with a silver finish extending on to the C-pillar. Also nice are the Creta’s flashy 17-inch diamond-cut alloy wheels. Buyers with conservative tastes, however, might find the Creta’s rear fussy. The split LED tail-lamps, an appliqué that links the lights and the low-set number plate make for a rather extroverted look.

Hyundai did not reveal the new Creta's interiorat Auto Expo 2020 but looking past the show car's blackened windows did give an idea of what to expect. The India-spec Creta will be different to the Chinese ix25 on the inside. The Chinese version's portrait-oriented touchscreen makes way for a landscape-oriented one and the AC vents have been repositioned too, giving the India car's dashboard a whole different look. What also remains to be seen is how much of the China-spec ix25's features are carried over. Hyundai has confirmed the Creta for India will come with a panoramic sunroof and an updated version of the BlueLink in-car connectivity suite. Cooled seats and wireless charging are also expected.

The new Creta is marginally larger than the original, and is longer in its wheelbase too. Given that the new Creta and Kia Seltos (Hyundai and Kia come under the Hyundai Motor Company) have much in common under the skin, space will be at par too.

Hyundai will reveal the Creta’s interior and more details closer to its launch, which is slated for mid-March 2020. Expect prices to be in the range of Rs 10-16 lakh (estimated, ex-showroom).

The original Creta not only defined what a midsize SUV ought to be but also dominated the segment for much of its life. Hyundai will want the all-new Creta to take the legacy forward.