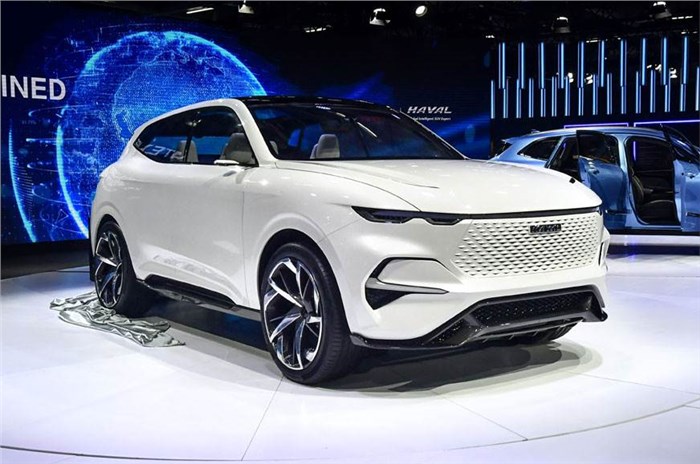 Haval calls it a next-generation SUV, as it features self-driving capabilities, 5G in-car connectivity and an all-electric powertrain.

Great Wall Motor’s Haval Vision 2025 that is being showcased at Auto Expo 2020 provides plenty of clues to what the Chinese brand hopes to do in the next five years. The concept previews the brand’s future design language, along with connectivity and battery electric technologies, though is unlikely to make it to production by 2025.

The big SUV looks decidedly concept-like – it’s got a muscular look that’s accentuated by the high-riding stance, along with slim headlight and tail-light units. Its large, stylish alloy wheels that are shod in low-profile tyres, along with a prominent shoulder line and raked roof, do give the impression that this is a sporty SUV. From the side, the glasshouse does seem to be limited though. On the other hand, ingress and egress should be easy enough, thanks to the suicide doors. The cabin is uncluttered and clean, though it is loaded with gizmos and tech.

The grille is a dead giveaway that the Vision 2025 is an all-electric car. However, Haval has not revealed specific powertrain details. The focus is on the in-car connectivity tech, features and self-driving capabilities. The model comes with facial recognition software, an augmented reality head-up display and cameras for ORVMs. A lot of the model’s features are activated and accessed via the in-car 5G connectivity suite.

While the Haval Vision 2025 is not expected to become a full production model, a lot of the technology showcased could trickle down to Haval’s other SUVs in the coming years.

Great Wall Motor has confirmed that it will enter the Indian market with the Haval brand in 2021. The Chinese carmaker has invested USD 1 billion into its India project, and will take over General Motors’ Talegaon plant for its India ops.

Haval F5 could be a right-sized SUV for India