New mStallion four-cylinder TGDI unit is the most powerful Mahindra engine ever; will power future Mahindras like the next-gen Thar, XUV500 and Scorpio as well as other SUVs from Ssangyong and Ford. 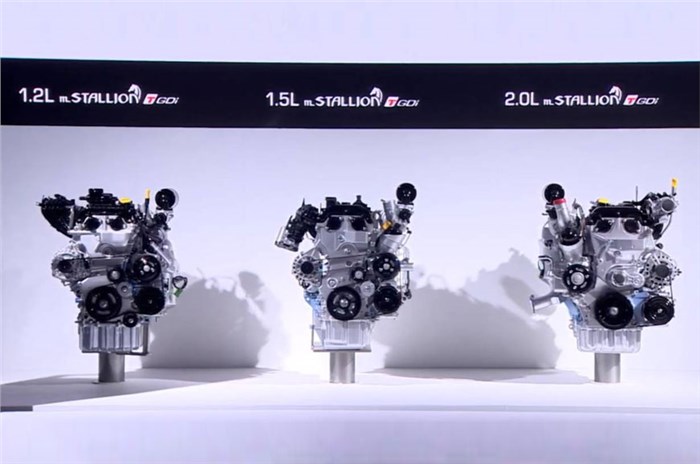 Since its inception over 70 years ago, Mahindra & Mahindra (M&M) has provided low-cost mobility for rural India and enduring images of overloaded Mahindras with passengers sitting on the roof has marked the company as a maker of robust frugal diesel vehicles. However, with demand rapidly swinging to petrol and away from diesel, M&M wants to align itself to this trend and urgently change the perception of being a predominantly diesel-driven automaker to one that has also embraced the latest in petrol-engine technology.

It’s for this reason, that taking pride of place at the M&M pavilion at the Auto Expo is an all-new range of turbo-gasoline-direct-injection (TGDI) petrol engines that will power upcoming Mahindra models – as well as future SUVs from Ssangyong and Ford.

Dubbed the mStallion, the range unveiled features 1.2-litre, 1.5-litre and 2.0-litre engines. The 2.0-litre engine develops 190hp and 380Nm of torque, making it the most powerful Mahindra engine till date. This state-of-the-art 1,997cc engine will be installed under the hood of Mahindra’s future range of larger SUVs – like the next-gen Thar (W501) XUV500 (W601) and Scorpio (Z101) – as well as Ford’s C-SUV, which shares the same platform and mechanicals as the W601. The mStallion will be mated to an all-new 6-speed manual transmission and a 6-speed automatic from Aisin. The 1.2 TGDI develops 130hp and 230Nm of torque, while the 1.5 develops 163hp and 280Nm of torque.

Other engines in Mahindra's petrol line-up include the 23hp, 625cc, single-cylinder petrol motor (for commercial application in the Jeeto), the mFalcon (G12), 1.2-litre, three-cylinder MPFI that powers the KUV100 and in turbo guise, powers the XUV300.

For M&M to establish itself as a credible petrol powertrain producer it was critical to get the engine architecture absolutely right, since this would serve as a strong base on which a family of engines and their derivatives for different applications and vehicles could be built. A key decision the company took was to opt for a long stroke or ‘undersquare’ design. This has several advantages; for instance, the smaller the bore, the lower the friction in the cylinders. A smaller bore allows the engine to be more compact whilst the long stroke gives better low-end torque.

The fundamental design of the new engine family was dictated by M&M’s gasoline strategy of offering consumer a petrol car that would be fun to drive, have a diesel-like oomph while being very fuel efficient too. Additionally, the new engines had to be future-proofed against tightening emission standards and CAFE regulations.

To meet these conflicting demands, M&M has upped the ante by moving from the conventional, naturally aspirated MPFI system (still used in the KUV100’s engine) to TGDI. Direct injection and turbocharging was an emerging trend when this engine was being developed and M&M decided to take the plunge and invest in this technology. TGDI gives better control over the combustion process. This makes optimisation of power, efficiency and emissions easier. The one thing that has given M&M an edge in the petrol-engine race is a state-of-the-art cylinder head with an integrated exhaust manifold. The biggest benefit of integrating the exhaust manifold with the cylinder head is that the coolant passages around the exhaust tracts absorb excess heat and lower the exhaust-gas temperatures significantly. A cooler running engine allows a higher compression ratio and more advanced ignition timing; this, in turn, reflects a significant improvement in performance and fuel economy.

Developing a cylinder head with an integrated exhaust manifold is something M&M is very proud of, as it’s still not a mainstream tech due to the complex design and manufacturing processes involved. “To design an integrated manifold is very complex and you need to use CFD (computational fluid dynamics) to precisely place the water passages and control the flow of the coolant so that the aluminium tracts can be appropriately cooled without altering their shape as aluminium is very sensitive to expansion and contraction,” says R Velusamy, senior vice president, head – Automotive Product Development, Mahindra. “It’s a highly complex and precise job and needs deep expertise; which our partners AVL provide. Once you have cracked how to engineer it, you can have all the benefits.”

Another key design feature is the off-set crankshaft which shifts the piston to the side of the crankshaft’s centre line. This gives the connecting rod a dead vertical path for movement up and down, reducing lateral forces on the piston. This means significantly lowering frictional losses, which is again good both for performance and economy alike.

In fact, lowering friction has been a big goal for M&M’s engine team and the new engine has a host of features like a low-tension piston pack, a variable-displacement oil pump, an 8mm bush chain to drive the ancillaries and a more compact and low-friction cooling and filtration module.

From the TGDI engine range it is the mStallion that showcases M&M’s engine tech and has all the goodies added to it. To achieve the best NVH standards, the mStallion gets a dual-mass flywheel, a single drive belt for all the ancillaries, a very rigid, short-skirt crankcase and a resonator on the turbocharger. Additionally, the mStallion employs a lot of lightweight bits like a plastic cam cover, and a plastic intake manifold.

Possibly the biggest challenge when developing a new engine is to predict how strict the emission regulations are going to be in the future. A lot of good engines (especially diesels) have gone from the market because the manufacturers didn’t see a tougher standard coming – a standard they couldn’t meet. M&M is taking no chances and is using a 250bar injection rail system with the injectors mounted in the side of the cylinder and not the top. According to Pankaj Sonalkar, head of Mahindra’s powertrain division the placement of injector in the side and not the top of each cylinder helps ‘minimise the formation of droplets in the combustion chamber and hence lowers particulates.’ The best part is that because droplet formation – which, in turn, creates deadly particulates – is low, the mStallion doesn’t need a Gasoline Particulate Filter (GPF). Even for the tighter emission norms coming in 2023, the mStallion motor will meet them without a GPF.

The proof of the pudding is, of course, in the eating; or in this case, in the driving. It’s the final calibration – possibly the most painstaking and time-consuming bit of the mStallion’s development – that will determine how well these engines perform. Velusamy assures us that “the 2.0-litre is refined, smooth, has huge torque, and will change the meaning of fun-to-drive”

The model that the mStallion will debut in is the next-gen Thar in April 2021. We can’t wait to drive it.