The current MEB and PPE platforms that underpin VW Group EVs will be replaced by a new Scalable Systems Platform (SSP) that’s under development. 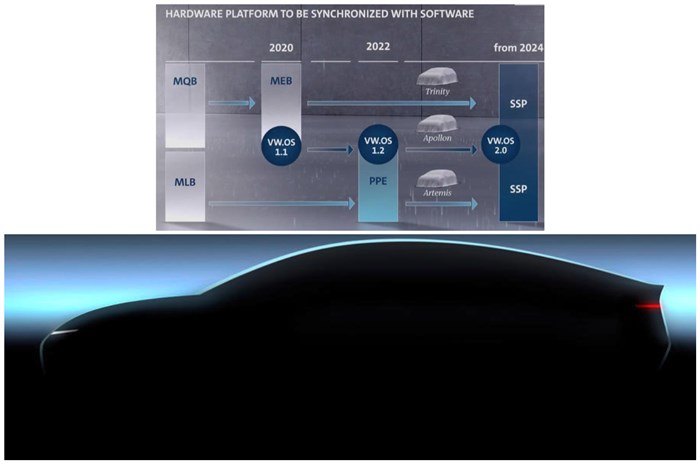 The Volkswagen Group will introduce a single platform for most electric vehicles across its brands in the future, with the new architecture being developed by Volkswagen's Project Trinity eventually replacing the current MEB and PPE platforms.

Audi to first use new Scalable Systems Platform in 2024

The new Scalable Systems Platform (SSP) is currently being developed within Volkswagen, and is set to be used for the first time as part of the first car developed by Audi's Project Artemis in 2024 or 2025. The hardware for the SSP platform is based heavily on the current MEB and PPE architectures, which are used for volume and premium EVs respectively.

When asked about SSP by our sister publication Autocar UK during the VW Group's annual results presentation group boss Herbert Diess said: "The SSP platform will replace the existing platforms over a long period of time. The start-up will begin with Artemis in 2024/2025. We’re taking what we’ve got with the MEB, and we’ll have cost improvement and standardisation of the battery, which goes hand-in-hand with a new electronic architecture providing more computing power to the vehicles. The SSP will eventually be the single backbone for the Group, we’re talking beyond 2035 here."

The move is part of step by the VW Group to introduce largely standardised technical foundations across its brands in the future, through increased use of standardised platforms, software, batteries and mobility services. The German giant, whose brands include Audi, Bentley, Porsche, Seat/Cupra, Skoda and Volkswagen, already operates extensive platform sharing but will substantially increase that approach in the future to increase its share of the electric car market.

Diess said SSP, which will largely be built in standardised form with options subsequently bought and activated online, will eventually replace both MEB and PPE. That process will likely take until the middle of the next decade.

He added: "How many platforms does a group need? We believe the differentiation of platforms due to many different drivetrain concepts is no longer relevant because all the new platforms have a battery skateboard. That gives us major scalability, because they can easily accept different battery sizes and so on. This approach makes perfect sense and is going to be one of the main levers to leverage the major scalability across the group."

“Volkswagen’s platforms are an important building block of the Volkswagen success story, and we are taking the platform approach to a new level,” said Diess. “By providing strong unified platforms our brands can unleash their full potential and synergies. Our MEB platform serves as a proof of concept. It has taken mobility into our core business."

Diess added that the increased use of platform sharing could enable greater economies of scale, which are “absolutely critical” for developing electric and digital technology. The company has already introduced the MEB electric platform, which will be used for 27 EVs by the end of next year, including the Volkswagen ID 3 and the India-bound ID 4, the Cupra Born, Skoda Enyaq and Audi Q4 e-tron. The first vehicle on the Audi and Porsche-developed PPE platform, likely an EV version of the Porsche Macan, will be introduced in international markets next year.

For software, the VW Group has invested heavily in its Car.Software division, and is developing a next generation VW.OS operating system that will be used across all brands in the coming years. The system is due to be introduced for the first time on the first production vehicle being developed by Audi’s Project Artemis in 2024.

Diess said that the aim is for VW’s software division to become Europe’s second largest software company. He added: “There is only one software domain where Europe still has a chance to play a leading role - that’s the next generation of automotive software. We want to lead the way in that.”

During its recent Power Day event, VW confirmed that it would switch 80 per cent of its EVs to a unified cell system, which it says will dramatically reduce costs. The cell will be designed so that different materials can be used within, depending on the performance needs of each model.

The Group is also investing in mobility solutions such as car sharing services, through its MOIA ride sharing firm and WeShare car sharing company.

The Skoda Auto Volkswagen India (SAVWIPL), which represents the passenger car subsidiaries of the Volkswagen Group in India, is currently working on bringing two new SUVs and two new sedans based on the localised MQB AO IN platform – the Skoda Kushaq SUV is set to make its international debut later today, the Volkswagen Taigun SUV is slated to arrive in the coming months, and replacements for the Vento and Rapid sedans will also arrive before the year is out.

Audi India will be launching its S5 Sportback facelift on March 22, while Porsche launched the Panamera facelift just last month.

Up to Rs 1.78 lakh off on Volkswagen Vento TSI this month