The sporty sedan rivals the BMW M340i xDrive and the Mercedes-AMG C 43. 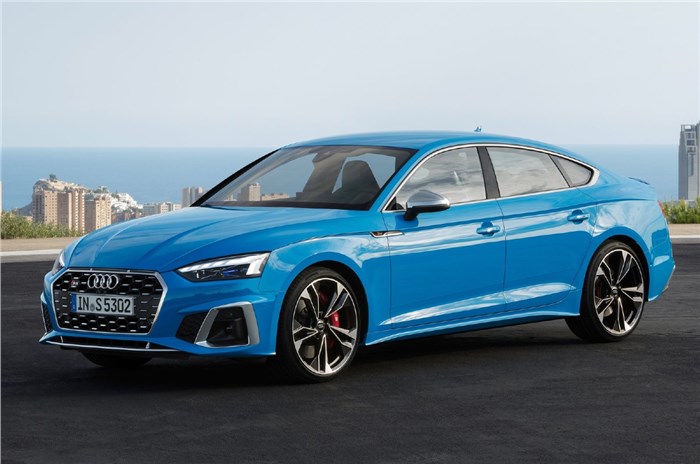 Audi India has announced that the long-awaited S5 Sportback facelift will be launched on March 22. The performance-focused variant of the Audi A5 gets styling tweaks and more technology with this mid-cycle update.

Compared to the outgoing model, the S5 Sportback facelift gets new front and rear bumpers, larger air intakes and a wider front grille with honeycomb inserts. It also features new Matrix LED headlamps as standard, new LED taillamps and a new rear diffuser. Being an S model, the Sportback gets silver accents around the front grille and fog lamp cluster, on the mirrors, around the window line and on the rear diffuser. The changes are rounded off by new alloy wheels.

Inside the cabin, Audi has done away with the old S5's rotary infotainment controller in favour of a new 10.1-inch touchscreen with the latest version of Audi’s MMI system. Furthermore, the 12.3-inch Virtual Cockpit digital instrument cluster also receives updated navigation software.

Audi S5 Sportback facelift: What engine does it get?

In India, the Audi S5 Sportback facelift will be powered by a 3.0-litre V6 TFSI turbo-petrol engine that puts out 354hp and 500Nm of torque. The engine will come paired with an 8-speed automatic gearbox, along with permanent all-wheel-drive. The Audi S5 Sportback facelift has a limited top speed of 250kph and is equipped with five driving modes - dynamic, comfort, auto, individual and efficiency.

Internationally though, Audi has also introduced a 350hp, 3.0-litre TDI V6 diesel engine to the S5 Sportback’s range. However, this engine option will not be on offer in our market.

Audi S5 Sportback facelift: What are its rivals?

In terms of rivals, the Audi S5 Sportback facelift will compete with the recently launched BMW M340i xDrive and the Mercedes-AMG C 43 coupe in India.

Currently, Audi India retails the A4, A6 and A8 L sedans, the Q2 and Q8 SUVs and the performance-focused RS7 and RSQ8 models.

In terms of future products, Audi has confirmed that it’ll launch the all-electric e-tron SUV and the e-tron Sportback in India in the first-half of 2021.