The electric SUV puts out 204hp and is capable of 520km on a single charge in RWD form; AWD version to arrive later. 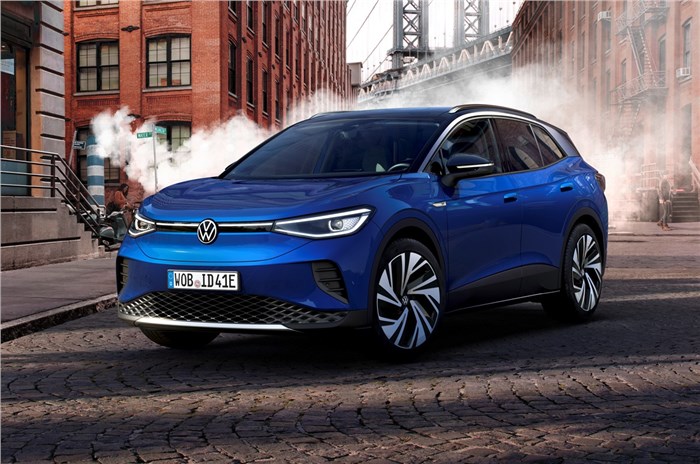 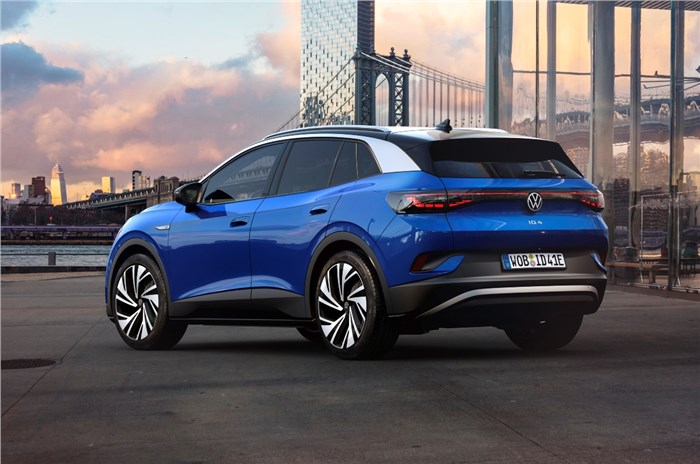 The Volkswagen ID 4 has been officially revealed in production-spec guise after being previewed by a liveried, near-production model earlier this year. The SUV expands the German automaker's family of ID-branded, all-electric models and follows the ID.3 electric hatchback that debuted last year. The ID.4 is also set to become VW’s first EV in the Indian market.

The Volkswagen ID.4 stays true to the I.D. Crozz concept, which was showcased at the 2020 Auto Expo, and carries forward VW's new design language for EVs. The front fascia is marked by a pair of sleek LED headlamps with wraparound LED DRLs, a light bar spanning the width of the nose, a blanked-out front grille and a wide, central air dam.

The side profile of the e-SUV sees some revisions compared to the Crozz concept. Unlike the concept's coupé -like roofline, the final production model features a more conventional profile. The stance is characterised by steeply raked A-pillars, a strong shoulder line and body cladding running along the wheel arches and door sills.

The 1st Edition models available at launch further get 20 or 21-inch alloy wheels and blacked out treatment for the roof and wing mirrors (which are conventional units instead of the concept’s digital cameras). Another neat detail is the provision of flush door handles that help reduce aerodynamic drag.

At the rear, the vertical tailgate features a light design mimicking the look at the front by using a pair of sharply-cut LED tail-lamps connected by an LED light bar.

The Volkswagen ID4 is the brand’s second model to be underpinned by the modular electric drive matrix (MEB) platform. In terms of exterior dimensions, the electric SUV is positioned between the Tiguan and Tiguan Allspace. It measures in at 4,584mm in length, 1,852mm in width and 1,612mm in height, and has a wheelbase of 2,766mm. Boot capacity is pegged at 543 litres and the ground clearance stands at a lofty 210mm. 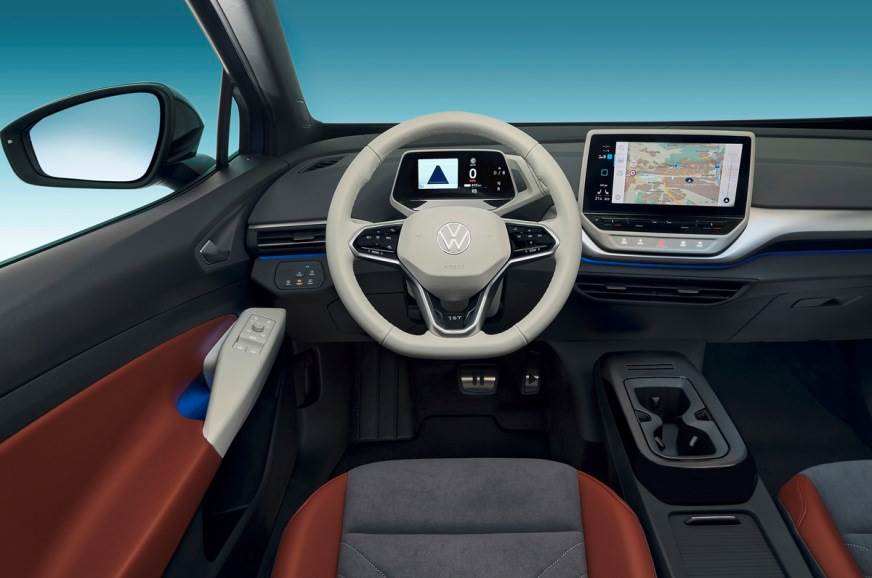 Those familiar with the ID.3 will find the electric SUV’s cabin layout to be quite similar. VW claims to have used a minimalistic design language to maximise the feeling of space.

The horizontally layered dashboard houses free-standing screens for the instrument cluster and infotainment system. And while VW has refrained from moving all functional controls to the central touchscreen, the company has largely done away with mechanical buttons on the dashboard, in favour of touch controls for a cleaner look.

Even the gear selector has been moved to the instrument cluster to free up space in the centre console. Further enhancing the perception of roominess is a panoramic sunroof that is twice as large as the one in the Volkswagen Touareg SUV.

Though the ID.4 has a smaller footprint than the Tiguan Allspace, it is said to match the larger model’s cabin space, owing to a long wheelbase and the lack of a central tunnel.

VW also touts the ID.4's cabin to be mostly “animal-free”, with all upholstery and trim making use of man-made materials, except the steering wheel cover. 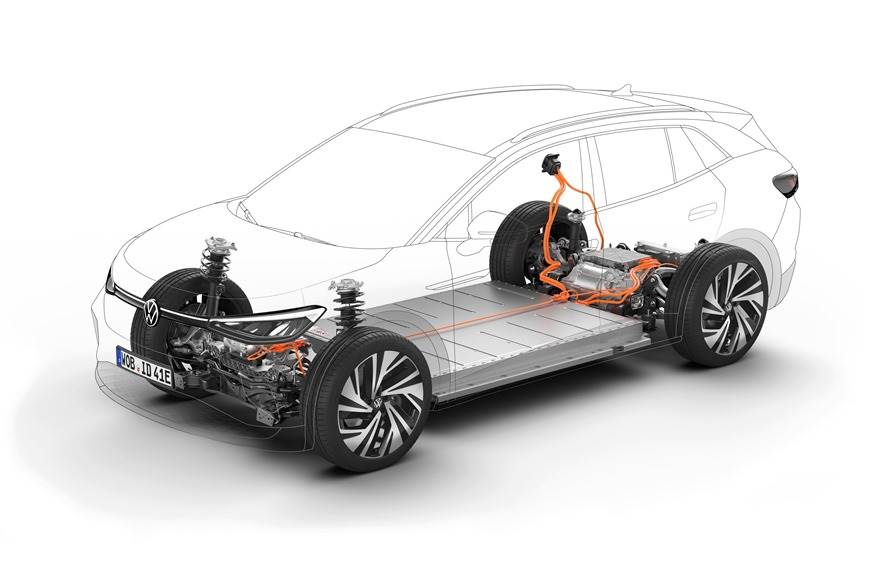 For now, the ID.4 comes with just a single powertrain option that features a rear-mounted synchronous electric motor. The 204hp, 310Nm drive unit is capable of propelling the SUV from 0-100kph in 8.5sec.

VW claims a battery capacity of 77kWh that is good for 520km driving range on a single charge, according to the WLTP cycle. The battery pack can be charged with an 11kW AC supply. Fast charging for 30mins using a 125kW DC source is said to provide enough charge for a 320km driving range.

While VW may have debuted the ID.4 in only a rear-wheel drive (RWD) configuration, an all-wheel drive (AWD) version is also expected in the coming months. The model will add a front-mounted 102hp, 140Nm electric motor to the drivetrain, with the combined system output pegged at 306hp and 450Nm of torque.

Commenting on the AWD variant at the global press meet, Silke Bagschik, head, marketing and sales, product line, e-mobility, Volkswagen AG, said, “We are keeping something special for the AWD version of the ID.4, but we will show that to you next year in spring (March-June 2021). Then, when you see that version, you'll see that 5 comes after 4; we do that together.”

It is expected that the conventionally-shaped ID.4 will be followed by an ID.5 coupé-SUV, taking inspiration from the swooping roofline of the I.D. Crozz concept.

The company has said that it is aiming for an early 2021 timeline to commence deliveries of the electric SUV in its core markets of Europe, USA and China. However, we can also confirm VW’s plans for an India launch of the EV moving forward.

"Yes, we are seriously exploring the ID4 as it is a good fit for the Indian market," a company source told Autocar India. The Volkswagen ID.4 will debut in our market after the launch of the Porsche Taycan and Audi e-tron.  With all three models introduced, the VW Group is aiming to build a charging infrastructure that can be leveraged by all group companies in the country.

The Volkswagen ID4 will be brought to India via the CBU (completely built-up unit) route, leveraging the government’s homologation-free rule for 2,500 import units. To avoid pricing the model out of the segment owing to the punitive duty structure, VW will likely bring in the electric SUV in the entry-level RWD form. Consequently, expect prices to be in the range of Rs 60 lakh (estimated, ex-showroom) when the ID4 is launched in India around 2022.