The production version of the VW ID Crozz will go on sale in international markets in September; India launch expected in 2021. 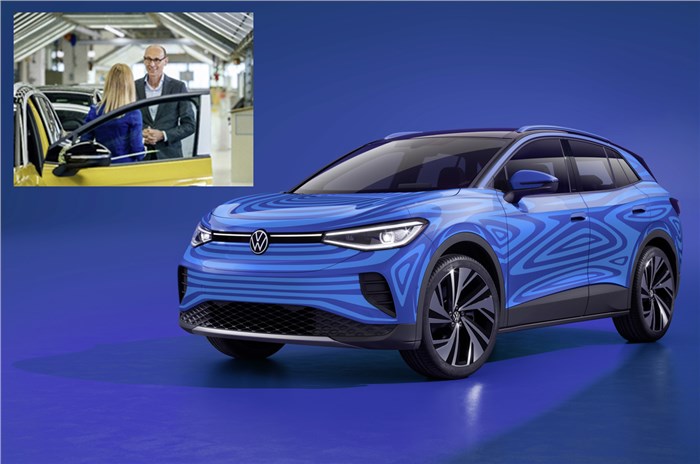 Ralf Brandstatter at the roll-out of the VW ID.4

Volkswagen has announced that series production of its first all-electric SUV, which is based on the ID Crozz concept, has begun at its Zwickau plant in Germany. Volkswagen brand boss Ralf Brandstatter was present to watch the cars emerge from the production line. While the Volkswagen ID.4 will go on sale in international markets late next month, its India launch is expected by 2021.

What is the Volkswagen ID.4?

The ID.4 is the production version of the ID Crozz concept, which was on display at Auto Expo 2020. This e-SUV, which will also be built at VW factories in the USA and China, is the second model built on the VW Group’s MEB electric platform, following the ID 3 hatchback.

Slightly larger than say a Hyundai Tucson or Volkswagen’s Tiguan, the VW ID.4 is 4,592mm long, 1,852mm wide and 1,629mm high, with a wheelbase of 2,765mm – these details, along with undisguised images of the all-electric SUV were released via leaked VW filings to China's Ministry of Industry and Information Technology (MIIT).

Brandstätter had stated earlier that initially the ID.4 will be sold with a single electric motor and rear-wheel drive, with a more powerful twin-motor, four-wheel drive layout will be offered within the first 12 months of sales.

Fast-charging will allow the battery pack to be charged to 80 percent within 30min on a 125-150kW system.

Just days before the Auto Expo, Juergen Stackmann, member of the board of management for sales, marketing and after-sales for Volkswagen, confirmed the German brand is actively considering bringing electric cars to our market. We had learned then that it was the ID Crozz concept-based SUV that would make it here. It was only in March 2020 that we got a first glimpse of the production-spec model and found out it would be called the ID.4.

The VW ID.4 will be a niche product considering electric cars in India are relatively costly and the charging infrastructure is yet to fully develop.