Interior sketch gives us a hint on the Kushaq’s feature list ahead of its March 18 world premiere. 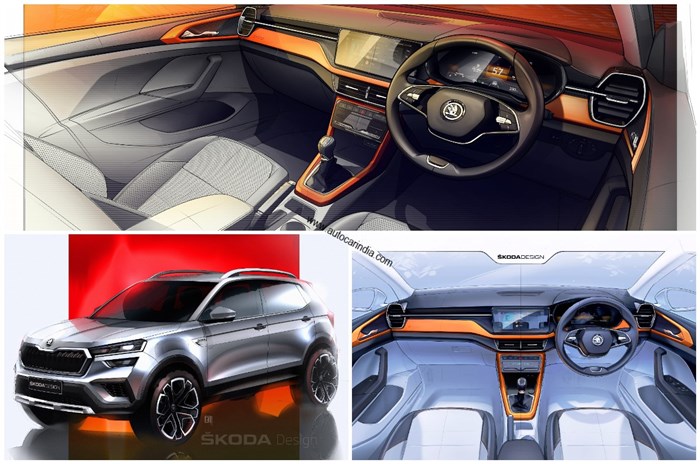 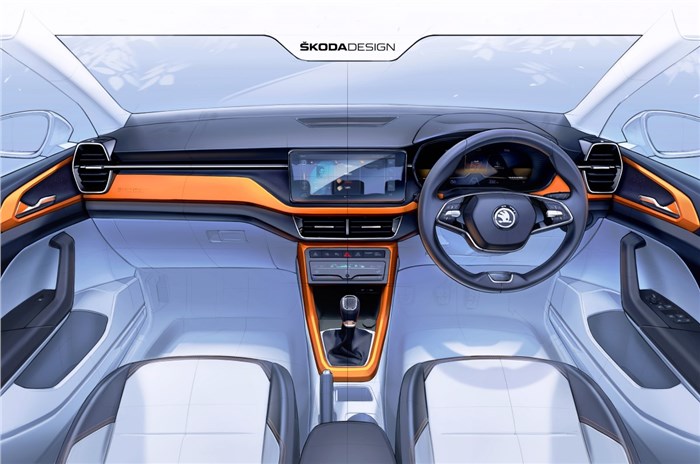 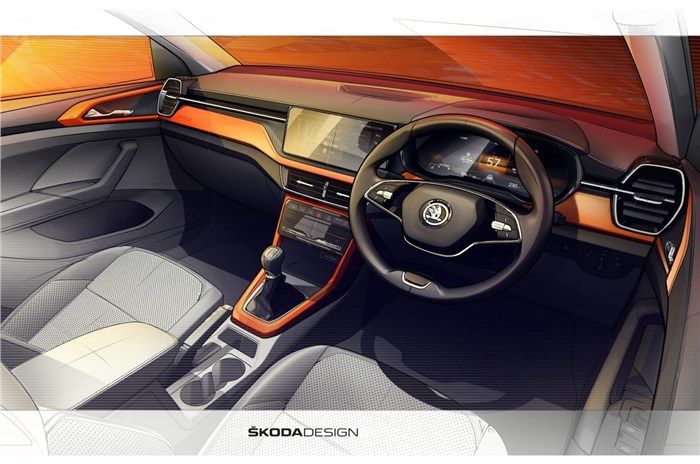 Skoda India has released a first set of sketches of its upcoming Kushaq SUV’s interior. The Skoda Kushaq will see a world premiere on March 18, 2021 and will go on sale in India thereafter.

Skoda Kushaq Interior: What do the sketches reveal?

As seen in the sketches, the production spec SUV’s interior looks quite similar to the Vision IN SUV concept that was shown at the Auto Expo 2020. The Kushaq will come with a layered dashboard that gets a thin chrome bar to separate the top from the bottom. This chrome bar spans the length of the dash and connects the large, chrome-lined vents at each end. Also, the production spec SUV could also see a liberal use of orange accents on parts of the dash, door panels and centre console.

A free-standing touchscreen takes centre stage that will measure upto 10-inches, according to Skoda that will come with a long list of connectivity, navigation and other features. Further on, instrumentation functions will be carried out by the Skoda Virtual cockpit that includes digital dials and a whole lot of information that will be displayed digitally instead of traditional analogue units.

Interestingly, the “crystalline element” that was placed atop the dash on the concept is not seen in the new sketches released by Skoda.

The steering wheel on the production-spec Kushaq will be a two spoke unit that is also seen on newer Skoda’s like the Superb and also the upcoming Octavia. It will be safe to expect a similar steering wheel on the upcoming Rapid-replacement sedan as well. A closer look also reveals the presence of knurled scroll wheels along with buttons for phone controls, voice command, lane assist and cruise control. Positioned centrally on the compact centre console is the gear lever that looks like the one for a manual gearbox. The SUV will also come with an automatic transmission. The centre console also houses buttons for HVAC which look like touch-sensitive units instead of rotary dials. Additionally, there are multiple storage spaces in the front and behind the gear lever that could be for wireless charging or general storage. A pair of cupholders are positioned behind the gear lever.

Skoda Kushaq: How does it look like on the outside?

On the outside, the Kushaq features a prominent and wide Skoda grille flanked by a dual-headlight set-up. It gets a muscular bumper with multiple cuts and creases.

At the back, it gets a roof spoiler and a faux diffuser and wraparound LED tail-lights that add width to the styling. 17-inch alloy wheels will be standard on the higher variants.

The Kushaq will be based on India-specific MQB-A0-IN platform – which will be shared with the Volkswagen Taigun SUV and the replacements for the current VW Vento and Skoda Rapid. Engine options for the Kushaq will include a 1.0-litre and a 1.5-litre turbo-petrol.

Expect more details on the production-spec Skoda Kushaq to surface in the coming days ahead of its world premiere that will take place on Thursday March 18, 2021.