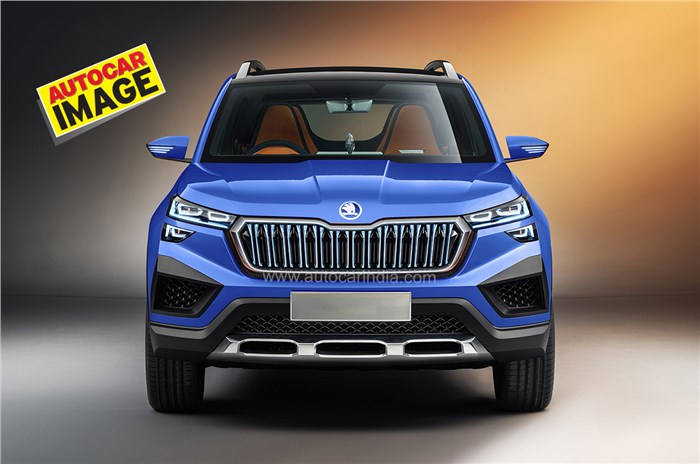 The all-new Skoda Kushaq midsize SUV will make its world premiere in March 2021, ahead of its launch in India. Deliveries of the Kushaq are expected to start by mid-2021. The Kushaq will be the production-spec version of the Skoda Vision IN concept that was showcased at the 2020 Auto Expo.

Production-spec Skoda Kushaq: under the skin

The Kushaq will be Skoda's first made-in-India model under the Skoda Auto Volkswagen India Pvt Ltd.’s (SAVWIPL) India 2.0 plan. This means it will also be the first model to use VW Group’s MQB-A0 platform, which has been heavily localised for India. As per Skoda’s claims, the Kushaq has been 93 percent localised, which is a massive step up for the carmaker, considering that the VW Group hasn’t managed to localise their cars beyond 76 percent in the last 10 years.

Coming to engine options, the Skoda Kushaq will come with two TSI turbo-petrol engines. The first is a 110hp, 1.0-litre, three-cylinder unit (also seen in the current Rapid) and the second is a 150hp, 1.5-litre, four-cylinder unit (which come in the Karoq).

Both engines will be offered with a 6-speed manual gearbox, though automatic gearbox options will vary, with the 1.0-litre engine getting a 6-speed torque converter and the 1.5-litre getting a 7-speed DSG.

While Skoda hasn’t officially revealed the Kushaq’s styling just yet, we have seen test mules of the SUV as well as a heavily camouflaged version of the near-production prototype. From these, it appears that Skoda will maintain the overall muscular styling and proportion of the Vision IN concept. Though we will have more details on the SUVs design once it is unveiled.

As with the exterior styling, Skoda has yet to showcase the Kushaq’s interior. Though from our time with the prototype, we can say that the rear seats do provide decent amount of space, even for taller passenger. A big contributor to this fact is the relatively long 2,651mm wheelbase of the Kushaq.

Other equipment expected to be available on the fully loaded models are a digital instrument cluster, panoramic sunroof, auto climate control and much more. Quality in the Kushaq, as with other Skoda models, is expect be quite high.

Skoda has also revealed that all variants of the midsize SUV will come with ESC (a segment first), six airbags, hill hold control, ISOFIX tethers for the rear seats, rain/light sensor and a tyre monitoring system.

Skoda Kushaq prototype: behind the wheel

Although we haven’t yet driven the production-spec SUV, we did recently get a chance to drive a close-to-production-spec Kushaq prototype. Our initial impressions after driving the prototype are that the 1.0-litre TSI engine-equipped Kushaq delivers good performance, and its ride and handling have also been tuned very well for both, low- and high-speed driving. On the other hand, the 1.5-litre TSI version of the SUV provides more power and torque, further aiding its performance. The most notable difference between the two version is that the 1.5 TSI Kushaq feels more nose-heavy than the 1.0 TSI and not as precise. It is worth mentioning that the final production-spec Kushaq will differ from the models we drove.

You can read our review of the Skoda Kushaq prototype for more details on how the SUV drives.

The Skoda Kushaq will be positioned in the hyper-competitive midsize SUV segment, where it will take on the Hyundai Creta, Kia Seltos, Nissan Kicks, MG Hector, Tata Harrier and Mahindra XUV500. Competition in the segment will only heat up with the introduction of the Volkswagen Taigun (based on the same platform as the Kushaq), which is slated to launch in India later this year.