Some Honda dealerships across the country are offering discounts and benefits on select cars. 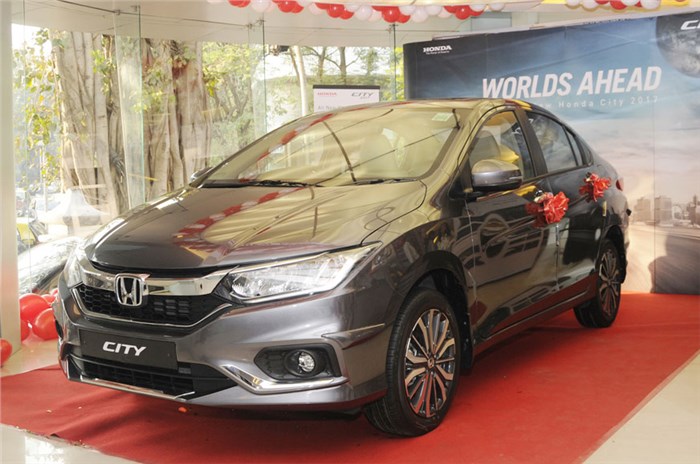 After a rather disappointing April 2019 in terms of domestic sales, Honda dealerships across the country are offering discounts and benefits on select cars from the carmaker’s India line-up during the month of May to boost sales. The cars that are currently on discount and have some benefits are the Amaze, Brio, BR-V, City, CR-V, Jazz and WR-V. We have compiled a list of all the available discounts on offer below.

Save up to Rs 2 lakh
The Honda CR-V has created a loyal fan following for itself in India, as it has been around in our market since 2004. The latest iteration of the SUV receives a third row of seating, as well as a diesel engine option, for the first time in our market. The CR-V is available with a 154hp, 2.0-litre, four-cylinder petrol engine that is paired to a CVT automatic gearbox and a 120hp, 1.6-litre, four-cylinder turbocharged diesel unit that comes with a 9-speed torque converter automatic gearbox. The diesel CR-V is offered in both 2WD and AWD layouts, while the petrol variant is only available with front-wheel-drive. Honda dealerships are offering discounts and benefits of up to Rs 2 lakh on AWD variants and up to Rs 1.25 lakh on the 2WD petrol and diesel variants of the CR-V.

Save up to Rs 1.10 lakh
The Honda BR-V is the carmaker’s practical, seven-seat offering in the MPV segment. The BR-V faces stiff competition from the second-gen Maruti Suzuki Ertiga and Mahindra Marazzo. It is offered with both, a 100hp, 1.5-litre diesel engine and an 119hp, 1.5-litre petrol unit. The diesel variants of the BR-V can only be had with a 6-speed manual gearbox, while the petrol engine can be had with either a 6-speed manual or a CVT automatic gearbox on the higher-spec V trim. Honda dealers are offering discounts and benefits of up to Rs 1,10,000 as sales incentives on the BR-V.

Save up to Rs 57,000
The Honda City has been a stalwart of the mid-size sedan segment ever since the first-gen model launched in India back in 1998. The fourth-generation of the City is priced between Rs 9.72-14.07 lakh (ex-showroom, Delhi) with the option of a 119hp, 1.5-litre petrol engine and a 100hp, 1.5-litre diesel engine. The petrol engine variants can be had with either a 6-speed manual or a CVT automatic gearbox, while the diesel variants can only be had with the 6-speed manual gearbox. The Honda City goes up against the likes of the Maruti Suzuki Ciaz, Hyundai Verna and Toyota Yaris. In order to better compete with its rivals, Honda dealerships are offering benefits and discounts of up to Rs 57,000.

Save up to Rs 45,000
The Honda Jazz competes in the Indian premium hatchback segment against the recently refreshed Maruti Suzuki Baleno and the Hyundai i20. In order to increase the hatchback’s appeal in this competitive segment, the Jazz received a mild update in 2018 that added more equipment but retained the same 90hp, 1.2-litre petrol and 100hp, 1.5-litre diesel engine options. Coming to gearbox options, the petrol variants are available with both, a 6-speed manual and a CVT automatic gearbox, while the diesel variants only get the former. Honda dealers are offering up to Rs 45,000 in discounts and benefits on the Jazz premium hatchback.

Save up to Rs 45,000
The Honda WR-V is a cross-hatch based on the Jazz, and typically features more rugged styling. The WR-V shares its 90hp, 1.2-litre petrol and 100hp, 1.5-litre diesel engines with the Jazz, although unlike the premium hatchback, the WR-V doesn’t get the option of a CVT automatic gearbox. Instead, it makes do with a 6-speed manual for both motors. Discounts and benefits of up to Rs 45,000 are being offered on the rival to Hyundai i20 Active by Honda dealers across the country.

Save up to Rs 40,000
Earlier this year, Honda announced that it would be discontinuing the Brio in India as it won’t be practical to update the hatchback to conform to the upcoming safety norms. The Honda Brio is only available with an 88hp, 1.2-litre petrol engine, which can be paired to either a 5-speed manual or a 5-speed torque-converter automatic gearbox. The Brio’s key rivals are the Ford Figo, Maruti Suzuki Swift and the Hyundai Grand i10. Dealerships across the country are trying to sell their current stocks of the Brio and are hence offering up to Rs 40,000 in benefits and discounts.

Save up to Rs 37,000
The second-generation Honda Amaze was launched last year by the carmaker to ensure that the compact sedan could remain competitive in this hotly contested segment, which consists of the Maruti Suzuki Dzire, Hyundai Xcent and Ford Aspire. The Amaze gets a choice of either a 1.2-litre petrol or a 1.5-litre diesel engine. On the gearbox front, both engines can be had with either a 5-speed manual or a CVT automatic gearbox. Currently, Honda dealerships are offering up to Rs 37,000 in benefits and discounts on the Amaze.