The starting price of the Magnite not only undercuts all of its rivals but is also cheaper than hatchbacks like the popular Maruti Suzuki Swift. 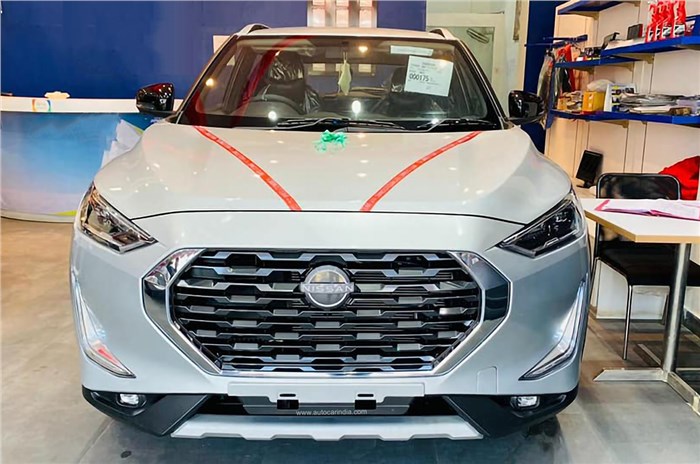 The Nissan Magnite has been launched in India, marking the Japanese automaker’s foray into the competitive sub-four metre SUV segment. Launched at Rs 4.99-9.45 lakh (introductory, ex-showroom, Delhi), the Magnite promises to be a feature loaded package at a very affordable price point.

The Nissan Magnite has been introduced in five trim levels – XE, XL, XV, XV Premium and XV Premium(O). The range starts with a 72hp, 1.0-litre petrol engine that is available in all but the top-spec trim. Of the competition, it’s only the Nexon and XUV300 that make do without a naturally-aspirated offering in the segment.

Nissan has undercut all its rivals on the price front by a significant margin and has positioned the base Magnite XE at a very attractive Rs 4.99 lakh (all prices, ex-showroom, Delhi). In comparison, the next most affordable compact SUV model is the Kia Sonet 1.2 HTE that is priced a substantial Rs 1.72 lakh higher.

The entry-level pricing of the Magnite also means that it is positioned on par with the much-smaller Maruti Suzuki Wagon R 1.0 VXI(O) hatchback (Rs 4.98 lakh), about Rs 20,000 lower than the base Maruti Suzuki Swift LXI (Rs 5.19 lakh) and roughly Rs 45,000 cheaper than the most affordable premium hatchback – the Tata Altroz XE (Rs 5.44 lakh).

On the higher-end, the feature-loaded Magnite XV Premium (Rs 7.55 lakh) is priced close to the low-spec Sonet HTK (Rs 7.59 lakh) and the Venue S (Rs 7.47 lakh). Notably, the EcoSport range begins at a much higher Rs 8.19 lakh, though the SUV does lose out on GST benefits owing its larger 1.5-litre petrol engine.

Nissan has revealed that the Magnite prices announced recently are introductory and valid till only December 31, 2020. Though prices for the base XE variant will be increased to Rs 5.54 lakh next year and the rest of the range will see a proportionate markup as well, Nissan is expected to continue holding a significant price advantage over rivals.

The naturally-aspirated 72hp Magnite petrol is not offered with an automatic option. In this category, the Brezza is the most affordable offering with a sticker price of Rs 9.75-11.15 lakh.

Owing to Hyundai and Kia’s decision to offer their more powerful petrol engine from only the mid-level trim onwards, both the Sonet and Venue turbo-petrol line-ups begin where the Magnite turbo range ends on the price ladder.

At Rs 8.55 lakh, the range-topping Magnite XV Premium(O) is positioned a whopping Rs 2-3.5 lakh lower than the respective top-end trims of the competition. And though the Nissan SUV misses out on a few features like the sunroof, at such an aggressive price point, it still makes for a rather incredible value proposition.

Of all the contenders, Ford, Maruti and Toyota forgo a turbo-petrol offering in their line-ups altogether.

All Magnite turbo variants can also be had with a CVT automatic gearbox that commands a premium of Rs 90,000 over its manual counterpart. The Magnite XL CVT, at Rs 7.89 lakh, is the most affordable automatic in the complete compact SUV category, including the non-turbo models listed above.

As a matter of fact, a closer look reveals that except the Tata Nexon, the automatic line-ups of all other models begin where the Magnite CVT range ends on the price chart.

For buyers wanting a bit more from their Magnite, Nissan has also introduced a ‘Tech Pack’ on variants starting from the XV trim. Costing an additional Rs 39,000, it adds a fair few features to the SUV like a wireless charger and a JBL sound system, among others. Dual-tone colour schemes are also available with all variants, save for the lower-spec XE and XL, and add Rs 14,000 to the price tag.

With the Renault-Nissan Alliance exiting the diesel space in India, the Magnite has been introduced with a petrol-only line-up, similar to the compact SUV models from Maruti and Toyota. In comparison, the Hyundai-Kia duo, along with Tata, Mahindra and Ford, continue to offer diesels in the segment.

The Magnite is not the most powerful model in its class, nor the best equipped. But it packs in all the necessary kit and then some. Making matters more interesting, it plays the price card by effectively undercutting the entire competition.

As such, it has the potential to attract buyers from other segments, including the hatchback category, and open up the compact SUV space to a wider section of the audience. Only time will tell if the Japanese carmaker is able to suitably translate this advantage into sales numbers.