Maruti Suzuki Nexa line-up to get CNG cars this year

Apart from expanding the Arena line-up with CNG cars, Maruti is also looking at adding CNG options to its Nexa line-up.

The new Baleno is likely to be the first Nexa model to get factory-fitted CNG kit. 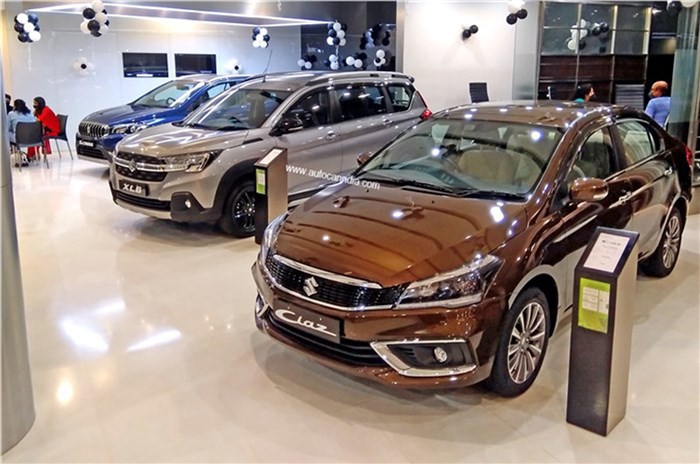 A factory-fitted CNG kit is also likely on cards for the Ciaz.

Maruti Suzuki is looking at bringing in CNG models under its premium Nexa dealerships. This will mean offering CNG as an option on models such as the Baleno, Ciaz and others that are retailed through this chain, said Shashank Srivastava, senior executive director – sales and marketing, Maruti Suzuki, to our sister publication Autocar Professional.

Any concerns about the ‘commercial’ image of CNGs killing the Nexa brand's aspirational quotient cultivated by Maruti have been apparently mitigated by the carmaker's research that suggests this isn’t the case.

As Srivastava puts it,” We believe the loss of aspirational quotient may not be there, and that’s the reason why we will be introducing CNG in the Nexa range as well. We are looking for an opportune time,” he added.

Maruti’s rivals – Hyundai Motor India and Tata Motors – have already eyed the gap in the market and are offering CNG in higher variants of their respective models, such as the Hyundai Grand i10 Nios, Aura, and Tata Tiago and Tigor. These cars combine CNG with features like a touchscreen infotainment system, automatic climate control as well as projector headlamps. Most buyers who opt for these cars are looking to reduce recurring fuel costs, but not at the mercy of modern comfort or convenience features.

According to Srivastava, “Right now, we have limited CNG options that are restricted to only certain variants in our models that are offered with CNG, but we have realised from customer feedback that even at the top-end trim of any model, running cost is extremely important for the Indian customer. So, we will be offering CNG in more variants and segments going forward.”

While fuel prices have already crossed the Rs 100 per litre mark, a further surge is expected due to the Ukraine crisis, which has seen crude breach the $110 per barrel mark. This has customers clearly concerned about cost of ownership.

This concern has manifested itself in the entry-level segment where motorists are increasingly switching to CNG. In the B segment, Maruti offers CNG in the Wagon R, whose mid-spec VXI variant offers more equipment and convenience features. The company has 10 CNG offerings. “About 15 percent of our sales are CNG, and in segments where we have a CNG offering, 30 percent of volume is from CNG variants. Waiting periods too are longer for the CNG trims,” Srivastava said.

In the last fiscal, Maruti recorded its highest ever CNG sales at 1,57,954 units, a 48 percent YoY growth, and looks set to cross that number in the current fiscal.

Maruti is also betting on the fact that factory-fitted CNG cars are superior to most aftermarket solutions. “Factory-fitted CNG vehicles are enjoying increasing demand as they are as safe as petrol-powered cars. Initially, we had not thought of introducing CNG in the Nexa range, but we now feel that we must have CNG options even for Nexa,” Srivastava added.

Maruti’s CNG push also comes from the fact that it no longer offers diesel options – having exited the segment when BS6 emission norms kicked in from April 2020 – and high-mileage customers like fleet operators, and those wanting cheaper transportation options, began looking at CNG.

For the sector as a whole, CNG-equipped cars recorded a 97 percent year-on-year growth in the first-half of FY2022, with total sales of factory-fitted CNG models scaling to 1,01,412 units, as against 51,448 units in the same period the previous fiscal.

The relatively-cheaper price tag of Rs 66 per kilogramme, compared to Rs 109.96 for a litre of petrol, as on March 5, makes CNG more wallet-friendly. With a fuel-economy rating that is also up to one-and-a-half times that of the claimed efficiency of petrol, driving a CNG-powered vehicle makes financial sense for cost-conscious car owners who are ready to trade off boot space for driving range. Moreover, CNG has 10 percent lower CO2 emissions compared to petrol, and a significant reduction in nitrogen oxide and soot emitted from a similar diesel-powered vehicle.

In the last few months, Maruti Suzuki has introduced the new Celerio and Baleno, and the refreshed Wagon R in our market. The next launch will most likely be the Dzire CNG, following which could be the Swift CNG. These will be followed by the refreshed Ertiga and XL6 MPVs, an all-new Brezza compact SUV, a Creta rivalling SUV with Toyota, and also an all-new Alto hatchback, all expected to launch this year. The Jimny could also make its way into Maruti Suzuki showrooms sometime next year.

problem with CNG is dispensing outlets are few and far between even in metro's and one has to q up with autowalla's for filling up...

problem with CNG is dispensing outlets are few and far between even in metro's and one has to q up with autowalla's for filling up...