The Kia Carens is the only vehicle in this list to get six airbags as standard across all the variants. Here is a complete list. 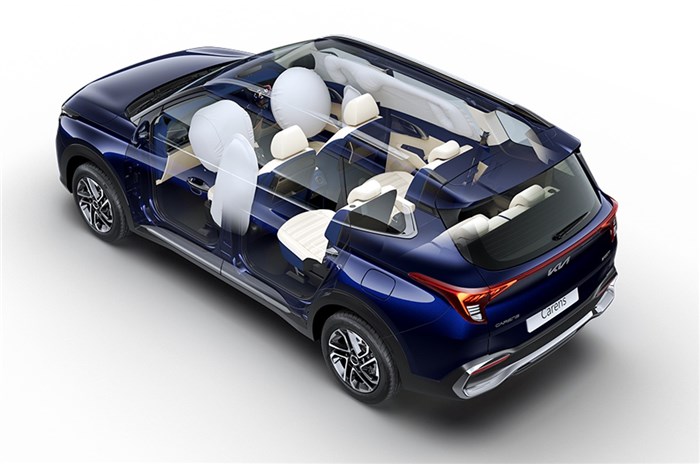 The growing awareness for road safety has pushed the Indian government to take steps towards making cars safer. Recently, Union minister for Road, Transport and Highways Nitin Gadkari stated that all new cars sold in India will compulsorily get six airbags as standard.

The current rule requires cars to be equipped with dual airbags as standard. In this list, we look at all the car and SUV manufacturers in India who offer six airbags on vehicles priced under Rs 20 lakh.

The fifth-generation City is the only car in Honda’s portfolio that offers six airbags from the mid-spec VX variant, which is priced from Rs 12.62 lakh onwards. Other Hondas like the Jazz, WR-V and the recently updated Amaze get only two airbags.

The new Baleno is the only car in Maruti’s stable to get six airbags on the top two variants. It is also the most affordable car in India to get side and curtain airbags, with prices starting from Rs 8.09 lakh.

Kia offers six airbag-equipped variants on all their MPVs and SUVs, with the Sonet and Seltos SUVs getting them only on the top-end GTX+ trims, which start from Rs 11.99 lakh and Rs 16.39 lakh, respectively. The newly launched Carens MPV, on the other hand, offers six airbags across all the variants, with the range starting at Rs 8.99 lakh.

Mahindra has stepped up its safety game in recent years. Mahindra’s smallest SUV – the XUV300 – gets six airbags and boasts of a 5-star Global NCAP rating. The company’s flagship XUV700 gets a similar Global NCAP rating, along with seven airbags and a benchmark-setting ADAS technology. The top-spec W8 (O) variant of the XUV300, priced from Rs 10.96 lakh, is the most affordable Mahindra with six airbags.

MG Motor has always betted big when it comes to cars, and apart from offering segment-first features like ADAS technology, all their models, including the Hector, Hector Plus and Astor, come with six airbags on top-end variants. The Sharp trim of the Astor, priced from Rs 13.98 lakh, is the most affordable MG with six airbags.

Tata Motors has earned a reputation for making safe cars. Despite having many high-scoring cars in Global NCAP crash tests, the most affordable one with six airbags is the Harrier, with its XZ trim priced from Rs 18.35 lakh.

Toyota’s new Glanza is essentially a badge-engineered version of the Maruti Suzuki Baleno. It, too, features six airbags on the top two trims. The G trim, priced from Rs 8.24 lakh, is the least expensive Toyota to get six airbags. The now discontinued Yaris had over six airbags in a few variants.

With the launch of the new Slavia and Kushaq, all Skoda models now come with six airbags or more. The Style trims of both cars get side and curtain airbags. The 1.0-litre Style variant of the Slavia, priced from Rs 13.59 lakh, is the least expensive Skoda to offer six airbags.

Like the Kushaq, the Taigun also offers six airbags on higher-end variants. The 1.0-litre Topline variant of the Taigun, which starts at Rs 14.57 lakh, is the most affordable Volkswagen to offer six airbags at the moment. The company will also launch the Virtus sedan in May, and its higher versions will be equipped with six airbags.

Opinion: It's all relative