6 airbags mandatory in cars from October 1

Previously approved draft notification states that all new cars manufactured from October 1, 2022, will have six airbags. 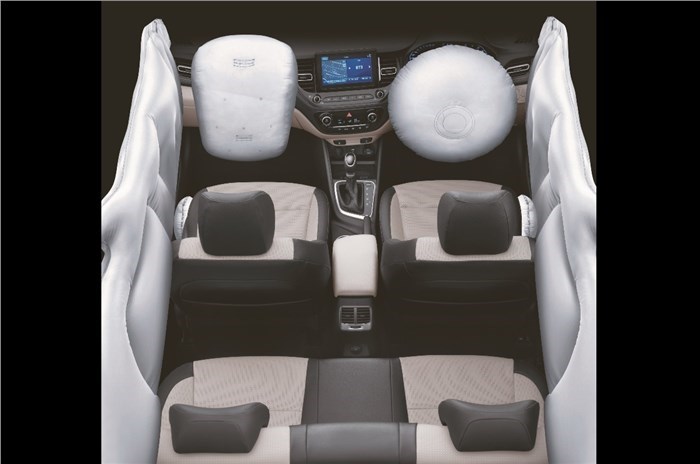 The recent announcement did not reveal the timeline of the plan, but the draft notification said that new cars will follow the updated safety norms from October 1, 2022.

As per the draft notification dated January 14, 2022, M1 category vehicles (vehicles that seat up to eight passengers and weigh less than 3.5 tonnes) manufactured after October 1, 2022, will be fitted with two front side airbags and two curtain airbags. The requirement for such airbags shall be verified with compliance to AIS-099, as amended from time to time, till the corresponding Bureau of Indian Standards (BIS) specifications are notified under the Bureau of Indian Standards Act, 2016 (11 of 2016).

Until recently, India’s standards for automotive safety haven’t been the best. It was only from April 1, 2019, that several safety features became mandatory, including a driver-side airbag. Passenger airbag was mandatory from January 1, 2022.

The government believes that additional airbags will make cars safer. While that may be true, the additional airbags are likely to increase the costs of cars by at least Rs 50,000. Also, cars that do not offer side and curtain airbags in any variants will require changes to the body shell as well as to the interior trim and fittings to ensure that the airbags deploy safely and effectively. This would further increase the cost of cars. It must also be noted that the stricter regulations coming up with the second phases of CAFE and BS6 emission norms by 2022-2023 will make cars even pricier.

Currently, some car manufacturers like Renault-Nissan do not offer six airbags on any of their cars. Meanwhile, other brands that do offer six airbags do so only in models and variants that cost upward of Rs 10 lakh. Kia Carens is a notable exception in this price range that offers six airbags across all variants.

The move is thus not likely to excite the auto industry, but it can be a potentially big development for crash safety. David Ward, executive president Global NCAP, in a note to Autocar India, said, “Our crash test results show clearly how airbags help prevent fatal and serious injuries and the new rules are most welcome.”

The move could help auto manufacturers earn higher Global NCAP ratings where side-impact tests are due to be included in the organisation’s #SaferCarsForIndia project.

What do you think about the government’s decision to mandate six airbags? Let us know in the comments below.

Opinion: It's all relative

While this may be a welcome move for passenger safety,the auto industry needs to be given a time line and the governments future plans atleast a couple of years in advance to help them plan and transition smoothly

While this may be a welcome move for passenger safety,the auto industry needs to be given a time line and the governments future plans atleast a couple of years in advance to help them plan and transition smoothly