Under its #SaferCarsForIndia campaign, GNCAP will introduce additional crash and safety testing by end 2021. It will also include active safety evaluation. 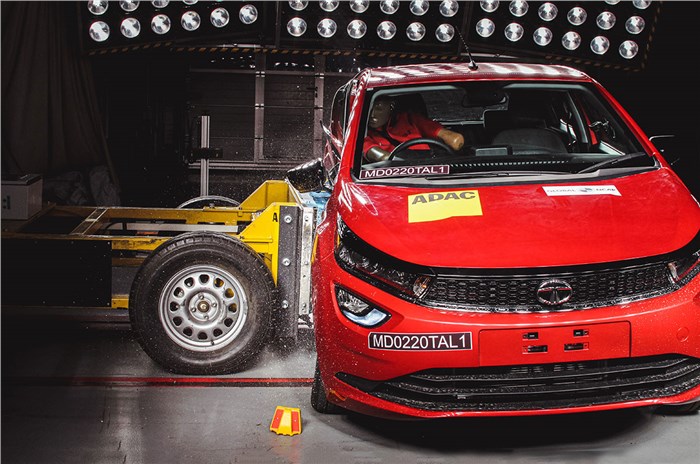 Global NCAP is all set to make its safety testing protocol for India far more stringent. Its #SaferCarsForIndia programme – launched in 2014 – currently awards cars up to a 5-star rating for adult and child occupant protection, via a single crash test only.

Called the Offset-Deformable Barrier test, it consists of the car driven at 64kph and with a 40 percent overlap into a deformable barrier, which GNCAP says is the equivalent of a crash between two cars of the same weight, both moving at 50kph. Additional tests are also carried out, like the side impact test recently done on the Mahindra Thar, though these are only for 5-star rated cars or done at the behest of the manufacturer.

In contrast, the European NCAP is a well-rounded protocol and consists of a plethora of tests that cover crash avoidance (active) and crash safety (passive), as well as post-crash safety like ease of passenger extraction. These tests were introduced in Europe and other countries in a graded manner and speaking to Alejandro Furas, secretary general of Global NCAP, we understand that the Indian protocol is on a similar path with an enhancement due next year.  “We were expecting a new protocol by January of 2020, but thanks to COVID-19 we’ve pushed this out to January 2022. We took this decision in May this year and manufacturers know we are going in this direction” said Furas.

Furas also noted that our new safety norms – set to UN standards – are pretty good and a far cry from what it was prior. “In some ways, you are way better than the US. You have pedestrian protection on the roadmap and even ABS for motorcycles, something that does not exist over there, so you are pretty good”.

However, there is a gap to the European standards and Global NCAP expects to close in on this at a faster pace, with Furas saying “In the years since, the industry has improved a lot, so we can put a little bit more pressure in the new protocol”.

Furas also stated that elements of the new protocol are as yet being finalised. “We have considered many things, not just ESC (expected). Something that will definitely come is the side impact system,” Furas said. Currently, the side impact test is carried out for only 5-star rated cars, or if a manufacturer voluntarily submits for it. With the change in protocol, all cars will be subjected to the test. Importantly, he also added that active safety elements like Electronic Stability Control, as well as seat belt reminders, will also figure in the new protocol and are set to be prerequisites for a car achieving a 5-star rating. This is good, because it will force manufacturers, especially those with a 5-star rating, to also look at putting in place active safety measures.