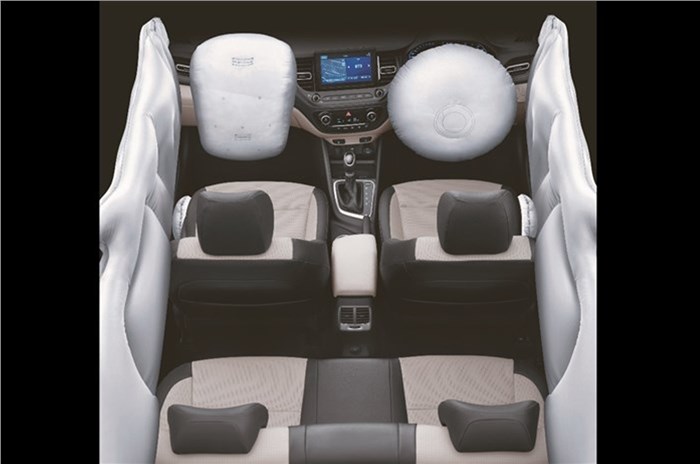 Adding side and curtain airbags can cost up to Rs 50,000 extra on budget cars.

Union Minister for Road and Transport and Highways Nitin Gadkari has approved a draft notification to mandate six airbags in vehicles carrying up to eight passengers. The minister had previously urged all carmakers to offers six airbags as standard on all vehicles in an effort to improve road safety in India and this now brings his proposal a step closer to reality.

6 Airbags could become mandatory on all vehicles

“In order to enhance the safety of the occupants in motor vehicles carrying upto 8 passengers, I have now approved a draft GSR Notification to make a minimum of 6 airbags compulsory,” tweeted Gadkari.

And while the minister hasn’t revealed any specific timeline by when carmakers will have to offer six airbags as standard on their cars, it must be noted that dual airbags only became mandatory on all vehicles this January. Meanwhile, a driver airbag had only become compulsory for all passenger vehicles from July 1, 2019.

What could be the challenges?

Offering six airbags as standard in a car will admittedly improve the vehicle’s crash safety rating, although there could be several challenges around it, particularly in the budget segment. For one, it will inevitably drive up the cost of vehicles. A frontal airbag in an entry-level car typically costs anywhere between Rs 5,000 to Rs 10,000 and side and curtain airbags can cost double that.

So, a car with six airbags could cost up to Rs 50,000 extra, which is a significant bump in price for cars with starting price from around Rs 3 lakh-3.5 lakh. It’s interesting to note that carmakers such as Maruti Suzuki, Renault and Nissan do not have a single car that’s offered with more than two airbags. Most carmakers that do offer six airbags only start to do so in models and variants that cost upward of Rs 10 lakh.

The second concern is that installing additional airbags will involve a lot of reengineering in cars not originally designed to offer that level of protection. Changes to the body shell as well as to the interior trim and fittings would be required to make sure that the airbags deploy effectively and safely. This, too, would again drive up the costs.

The auto industry has already been reeling with rising input and operational costs, plus there are stricter emission norms coming up with the second phases of CAFE norms and BS6 emission norms by 2022-'23. And while the ministry would hope automakers to absorb most of the additional input costs, some of it would inevitably be passed on to the customer.

The move is thus not likely to excite the industry, however it can be a potentially big development for crash safety, David Ward Executive President Global NCAP, in a note to Autocar India said “Our crash test results show clearly how air bags help prevent fatal and serious injuries and the new rules are most welcome”. The move could help automakers secure a better score in the Global NCAP ratings where side impact tests are due to be included in the organizations “safercarsforindia’ crash test protocol.

What remains to be seen now is how the fitment of six airbags as standard on all vehicles alters the cost structures for automakers and customers as well. What’s for certain is that while cars will become more expensive, they are also going to get a lot safer.

What are your thoughts on all vehicles being fitted with six airbags as standard and how it affects the price? Let us know in the comments below.

I appreciate our Honourable transport minister for new safe technologies as mandatory in safe guarding our lives. How ever I Request For Strict guidellines in issuing DrivingLicences with Added few safer international Driving practices ,Like Stop & Go on Turns & while getting on to bigger roads, Priorities on Taking Turns.ETC Making Spare wheel as Mandatory Turn signal stalk matching to RHD

I appreciate our Honourable transport minister for new safe technologies as mandatory in safe guarding our lives. How ever I Request For Strict guidellines in issuing DrivingLicences with Added few safer international Driving practices ,Like Stop & Go on Turns & while getting on to bigger roads, Priorities on Taking Turns.ETC Making Spare wheel as Mandatory Turn signal stalk matching to RHD