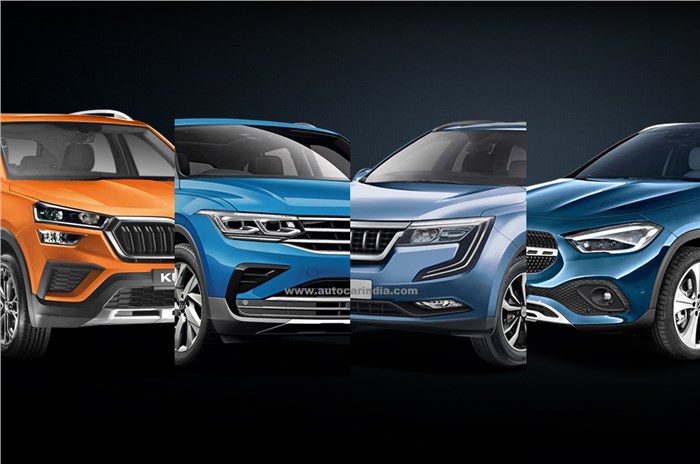 Here's a list of all upcoming SUVs and cars that will launch in the next few months.

The ongoing second wave of the COVID-19 pandemic in India led manymanufacturers to delay launchesof their new models. However, with India showing signs of gradual improvement in terms of cases recorded every day, carmakers are gearing up to launch their new models in the market soon. Here are all the cars and SUVs that will launch in India in the coming months.

Skoda will launch the2021 Octavia in India in June. The sedan was earlier scheduled to launch towards the end of April. The 2021 Skoda Octavia gets an overhauled exterior and an all-new interior, along with a solitary 190hp, 2.0-litre petrol engine that’s mated to a 7-speed dual-clutch automatic gearbox.

Originally scheduled to launch in April, theHyundaiAlcazar three-row SUV is nowslated to launch in June2021. TheCreta-based Hyundai Alcazar has a 150mm longer wheelbase and an added row of seats (with 6- and 7-seat configurations), in comparison to its 5-seat sibling. The SUV will come with the petrol and diesel engines, both of which will get manual and automatic gearbox options.

TheSkodaKushaq was revealed in itsproduction-spec guiseearlier this year in March and was expected to launch soon after. However, due to the prevailing pandemic situation in India, thelaunch is now set to take place in June. The Kushaq is based on the India-specific MQB-A0-IN platform and it will come with two engine options – a 115hp, 1.0-litre three-cylinder turbo-petrol and a 150hp, 1.5-litre four-cylinder turbo-petrol.

Audi’s all-electrice-tronSUV is now expected to launch in June. However, this could change depending on the prevailing COVID-19 conditions. The carmaker’s first full EV was originally scheduled to launch in May 2021. The e-tron will come with a 95kWh battery pack, which provides a WLTP-certified range of 440km and will power two electric motors. Combined, the electric motors produce 408hp, allowing the full-electric SUV to complete the 0-100kph sprint in a claimed 5.7sec.

The all-newVolkswagenTaigunis set to enter the midsize SUV segment in India in the coming months. A sister model to theKushaq, the Taigun is also underpinned by the same MQB-A0-IN platform and will share the same turbo-petrol engine options as on the Kushaq. However, the Volkswagen will distinguish itself from the Skoda thanks to its exterior styling. Due to its high level of localisation, Volkswagen is expected to price the SUV quite competitively.

Volkswagen is also slated to launch the facelifted Tiguan SUV in India soon. The 5-seater Tiguan will return to the Indian market with cosmetic updates and feature upgrades over the outgoing model, along with a new 2.0-litre TSI turbo-petrol engine which replaces the older 2.0-litre TDI turbo-diesel unit. The Volkswagen Tiguan will rival theHyundai Tucsonand theJeep Compass.

Maruti Suzuki’s next-genCeleriowas originally expected to launch around Diwali last year but was postponed due to the COVID-19 pandemic. The all-new hatchback will now launch in the coming months in India. The new Celerio is likely to be based on the carmaker’s ‘Heartect’ platform and will feature all-new styling on the interior and exterior. Expected engine options include a 68hp, 1.0- litre, three-cylinder petrol engine, and a more powerful 83hp, 1.2-litre four-cylinder petrol engine.

The successor of the popularXUV500, the all-newMahindra XUV700is set to launch in India by October 2021. The SUV will come packed with features like a dual-screen setup, with one screen for the infotainment and the other for the instrument cluster, an electronic parking brake, a panoramic sunroof and Level 2Autonomous Driving Assist Systems (ADAS),among others. The upcoming Mahindra XUV700 will be offered with both, diesel and petrol engine options.