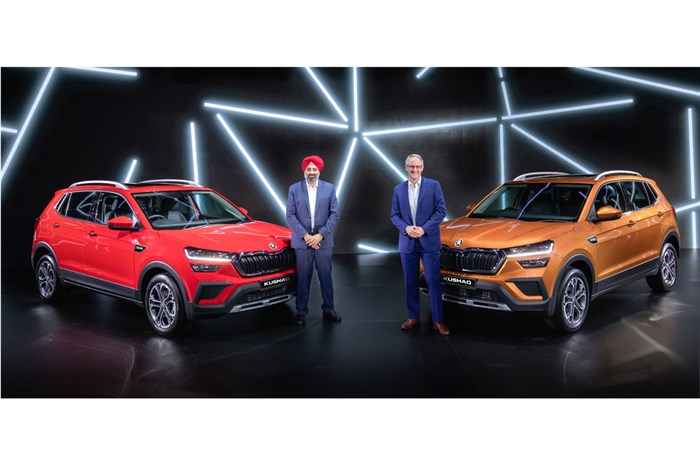 The production-spec Skoda Kushaq has finally made its world premiere. Previewed by the Vision IN concept, the midsize SUV is the first model to arrive from the VW Group’s India 2.0 project.

The exterior design of the production-spec Skoda Kushaq remains quite similar to the Vision IN concept. Up front, it features a prominent and wide Skoda grille flanked by a dual-headlight set-up. The Kushaq’s front bumper has plenty of cuts and creases, which makes it look sporty.

Along the sides, there’s a bold character line, along with body cladding on the lower parts of the doors and around the wheel wells. Top-spec versions also get roof rails and the 17-inch diamond-cut dual-tone alloys look sporty as well.

At the rear, the production-spec Kushaq gets a roof spoiler and a faux diffuser element that’s finished in silver. There are also wraparound LED tail-lights that add to the sense of width of the SUV. Overall, the Kushaq looks similar to larger Skoda SUVs such as the Kodiaq and the Karoq.

The Kushaq gets a layered dashboard with a thin chrome bar that separates the top from the bottom. The chrome bar spans the length of the dash and connects the large, chrome-lined vents at each end.

A free-standing, 10-inch touchscreen, which features smartphone connectivity, connected car technology and more, takes centre stage. The central AC vents are positioned below the touchscreen, under which, are the feather-touch HVAC controls. While the touch panel for the climate control looks neat, it is not as intuitive to operate as physical buttons are. Naturally the “crystalline element” that was placed atop the dash on the Vision IN concept is not present on the production model but there is a recess where an idol can be placed.

The steering wheel on the production-spec Kushaq is a two-spoke unit, in line with newer Skoda models like the Superb and the upcoming Octavia. The steering wheel feels premium and features knurled scroll wheels and buttons for audio and phone controls, voice commands and cruise control. The Kushaq comes with traditional dials for instrumentation. While the dials do look nice and are neatly laid out, it would have been nicer if Skoda offered a digital instrument cluster, atleast on the top-spec variant.

When seated up front, you get a good view out of the cabin. The front seats are ventilated and offer good support. At the rear, there's plenty of legroom even for six-footers. The seat itself is comfortable and has there's a good amount of underthigh support as well. However, the headroom for six-footers will be a bit tight at the back.

Safety features on the top-spec Kushaq will include six airbags, ISOFIX child seat mounts, auto headlamps and wipers, and a multi-collision braking system. However, all Skoda Kushaq variants get disc brakes up front and drum brakes at the rear.

The Skoda Kushaq comes with two engine options – a 1.0-litre three-cylinder turbo-petrol and a 1.5-litre four-cylinder turbo-petrol. The 1.0-litre TSI puts out 115hp and comes with 6-speed manual and torque convertor auto gearbox options. The 1.5-litre TSI unit, meanwhile, puts out a healthy 150hp and will be available with a 6-speed manual and a 7-speed dual-clutch automatic option.

Both engines will be produced at Skoda's Chakan plant.

The Skoda Kushaq is based on the India-specific MQB-A0-IN platform – which will be shared with the Volkswagen Taigun  and the replacements for the VW Vento and Skoda Rapid.

Due to the 95 percent localisation of parts and the sharing of essential components with other models, expect the Skoda Kushaq to be priced competitively, in the Rs 10-16 lakh (ex-showroom) range. Skoda is expected to announce prices for the Kushaq in the coming weeks.

In terms of rivals, the Skoda Kushaq will compete against the upcoming Volkswagen Taigun, the Kia Seltos, the Hyundai Creta, the Nissan Kicks, the MG Hector and the Tata Harrier.