Petrol Kia Sonets account for 60 percent of the bookings 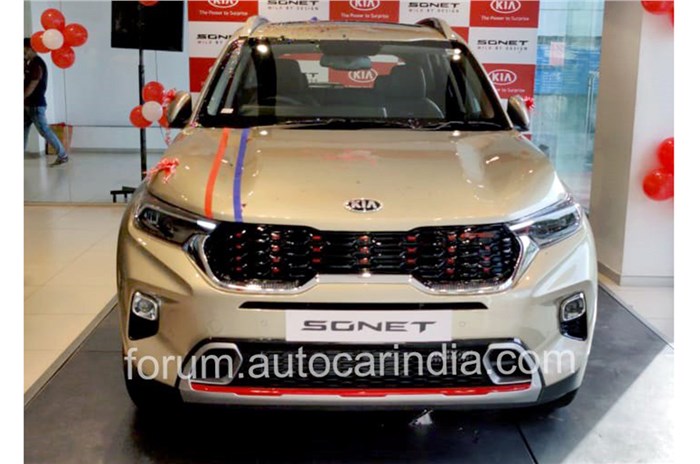 Kia Sonet bookings have crossed 50,000 in just two months since they were opened for the compact SUV. Priced from Rs 6.71 lakh to Rs 12.89 lakh (ex-showroom, pan-India), the Kia Sonet is being offered in six trim levels and five engine-gearbox combinations to choose from.

Kia’s third model for India, the Sonet has received 50,000 bookings within two months of them opening on August 20, 2020. Kia says that, on average, two orders were placed every three minutes since it started accepting bookings for the compact SUV. The Korean carmaker also stated that the 1.0-litre and 1.2-litre petrol engines account for 60 percent of the bookings, with the remaining 40 percent being for the 1.5-litre diesel engine. The Sonet is already proving to be popular, with Kia dispatching 9,266 units of the SUV in September alone.

The Kia Sonet is available with two petrol and one diesel engine option. The petrols include a 83hp, 1.2-litre naturally-aspirated engine that’s mated to a 5-speed manual gearbox only and a 120hp, 1.0-litre direct-injection, turbocharged unit that can be had with either a 7-speed dual-clutch automatic or a 6-speed iMT (clutch-less manual) gearbox.

The Kia Sonet diesel is powered by a 1.5-litre, four-cylinder, turbocharged unit that produces 100hp and 240Nm when paired to the 6-speed manual gearbox. However, the diesel engine makes 115hp and 250Nm (up by 15hp and 10Nm) when fitted with the 6-speed torque-converter automatic gearbox. The Kia Sonet is currently the only offering in the compact SUV segment to come with a diesel-torque converter gearbox combination.

There soon will be further competition in the segment, with the introduction of models from the Renault-Nissan Alliance – the Nissan Magnite and the Renault Kiger.