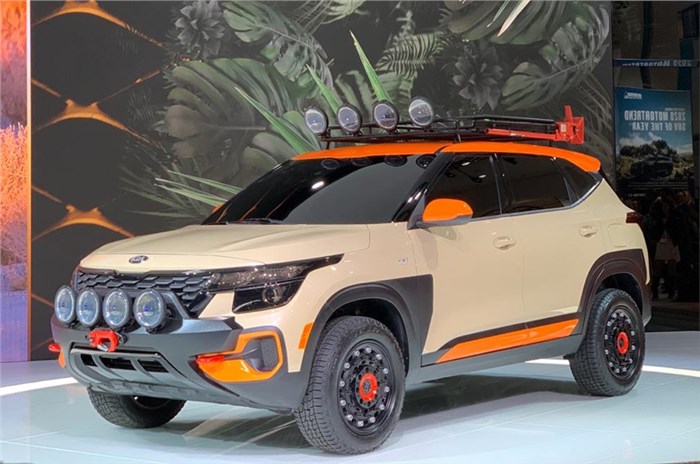 Kia has taken the wraps off the North American-spec Seltos SUV at the ongoing Los Angeles Auto Show 2019. The model went on sale in markets like India and a few other ASEAN regions earlier this year. The new Kia SUV slots between the Kia Soul on the lower end and the Kia Sportage on the higher end of the Korean brand's North American line-up.

The left-hand-drive Kia Seltos looks more or less identical to the one sold in our market but comes with a different set of engines. Powering the Seltos for North America is a 2.0-litre petrol good for 146hp as well as a 1.6-litre turbo-petrol engine that churns out 176hp. The Seltos 2.0 comes with a CVT gearbox while the 1.6 version gets a 7-speed dual-clutch transmission. Higher variants also come with standard AWD. Kia will sell the Seltos SUV in North America in five variants. It also gets Kia’s UVO Connect system, a 10.25-inch screen, wireless charging and multiple USB ports.

The Seltos X-line Trail Attack concept (pictured) sits on a custom suspension setup that gives it a 2-inch lift and around 235mm of ground clearance.  The concept is based on Seltos AWD and is also shod with a center differential lock. Additionally, it gets 17-inch custom alloy wheels, a winch at the back, a custom roof rack, and additional Hella auxiliary lights on the front bumper and on the roof.

The Seltos X-Line Urban concept gets 17-inch wheels with gold finish, a similar 2-inch lift with AWD, lesser number of auxiliary lights, a hood scoop and a roof rack. It however gets the same interior as the production spec SUV.

Closer to home, the Seltos made its debut earlier this year and is available in eighteen variants and multiple engine-gearbox options.  The company has now begun work on the Carnival MPV as well as an all-new compact SUV for India. Both upcoming Kia models will hit the showrooms next year.