Deliveries of the Sonet to start from September 18; Kia to make India the export hub for the compact SUV. 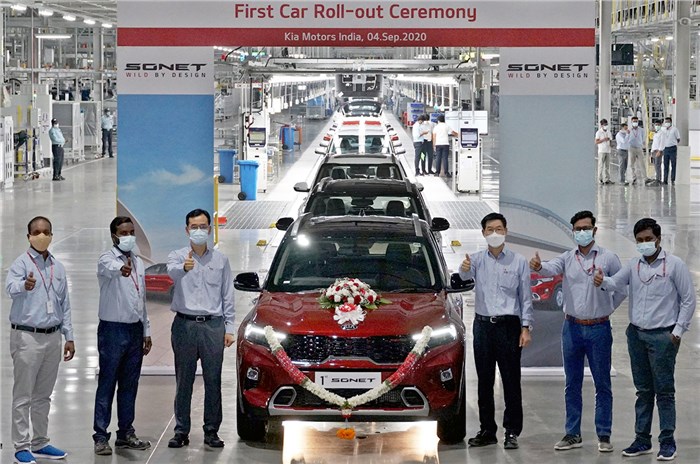 The first Kia Sonet customer car has rolled of the production line at the carmaker’s Anantapur plant in Andhra Pradesh. The Sonet, the brand’s most anticipated launch this year, will be Kia’s third model for the country.

Commenting on the occasion, Kookhyun Shim, MD and CEO at Kia Motors India said, “Today is a momentous day for Kia Motors India, as we officially roll out the first Kia Sonet customer car. It is a matter of great pride that we have been able to stay true to our promise of ‘The Power to Surprise’ and bring in Sonet in time, despite the unprecedented challenges the world is facing today.”

When will deliveries start?

Kia has said that deliveries for the Sonet will start from September 18. The carmaker has also said that it plans to make its Indian facility the export hub for the Sonet to 70 countries across the globe.

What do we know about the Kia Sonet?

Set to launch on September 18, the Sonet is the cousin to the Hyundai Venue and will sit in the highly competitive compact SUV segment.

The Sonet will be available in a choice of six trim levels across two styling packages – Tech Line and a sportier looking GT Line. The Tech Line variants will include the entry-level HTE, HTK, HTK+, HTX and fully-loaded HTX+. The GT Line will solely be available in the fully loaded GTX+ trim. For more variant details click here.

Moving to the engines, the Sonet will be offered with the same engines as the Hyundai Venue – a 1.2-litre naturally aspirated petrol, a 1.0-litre turbo petrol and a 1.5-litre diesel engine. However there will be two key differences. The 1.0 turbo-petrol will not be offered with a conventional manual gearbox and will instead come with a 6-speed iMT clutchless manual gearbox as standard – the Venue 1.0 T-GDi has both a manual and iMT.

What will it rival?

The Sonet will sit in the highly competitive compact SUV segment and will rival the Hyundai Venue, Maruti Vitara Brezza, Mahindra XUV300, Ford EcoSport, Tata Nexon and the soon to launch Toyota Urban Cruiser. You can see how these SUV’s compare on paper here.