Kia India's Hardeep Singh Brar believes that in addition to the aggressive pricing, the spacious last row in the Carens can lure buyers away from traditional, three-row SUVs. 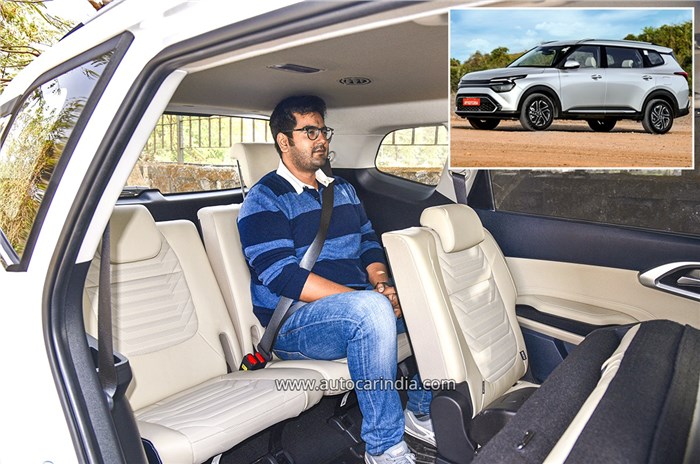 Kia recently launched the Carens, its third mass market model for India. Positioned between Rs 8.99 lakh-16.99 lakh (ex-showroom), the aggressive pricing has taken everyone by surprise. In addition to its competitive positioning, the model’s comfortable third row space is something that Kia has put emphasis on, and the company aims to use these two factors to lure buyers away from the traditional, three-row SUV segment.

"There are a lot of SUVs with three rows in the market. Those are the customers whom we are considering with the Carens," said Hardeep Singh Brar, VP and head of sales and marketing, Kia India, in a recent interview with Autocar India.

“Nobody has looked at 6- and 7-seaters as intensely as we have, and we want to disrupt the segment, right from the lower-end to the top. We want to cross all the vehicles available in that segment,” commented Brar.

In the same vein, Kia has decided to offer the Carens at a shockingly low, albeit introductory, pricing. “We have shared a lot of the Carens’ parts with the Seltos. So, the overall economies of scale have really helped us in managing the price point,” said Brar.

"Customers are really getting impressed with the last row space [in the Carens], which they don’t get in those [three-row] SUVs that are essentially an extension of an existing 5-seater SUV," commented Brar. “The Carens is built from scratch. Unlike other three-row models in the market, it is not an extension of anything. This has given us a big advantage.”

A quick look at the Carens’ tech specs reveals that though it may be overall shorter than the Tata Safari, Mahindra XUV700 and the MG Hector Plus, it still has the longest wheelbase and offers the most comfortable third row for a vehicle of this size.

While Kia believes that the Carens is capable of drawing in buyers from the SUV segment, it will still have to face competition from well-entrenched rivals in the MPV category – the Maruti Suzuki Ertiga (Rs 8.12 lakh-10.85 lakh), the XL6 (Rs 10.14 lakh-12.02 lakh) and the Toyota Innova Crysta (Rs 16.89 lakh-25.32 lakh) – which have built a loyal customer base over the years.

While the third row space might be a big selling point for the Carens, Brar acknowledged that utilisation of the last row will likely be low. He said, “What happens in these kinds of cars is that customers use the third row about 20-25 percent of the time.”

While limited spacing at the back is manageable for shorter stints, it becomes impractical for longer journeys, believes Brar. “The important thing is that buyers use such cars for long distance travelling, and then you can't be crammed into the third row,” he commented. “Though the utilisation might be less, whenever the third row is used, it is for long-distance travel. Hence, space in the third row is critical.”

Since 2020, the three-row vehicle market seems to have caught the attention of automakers in India, with a rise in the number of models available. As such, segment volumes have also grown. “If you look at the entire 6- and 7-seater segment, it is about 40,000 units a month," explained Brar. "At the Carens’ price point, and the relevant cars which can be compared with this, the volumes are about 30,000 units. So, it’s a fairly large segment and it is growing at about 50 percent year-on-year. There's a latent demand for these kinds of vehicles where you can travel with the entire family in one car.”

Would you choose the Kia Carens over any of the three-row SUVs in a similar price range? Let us know in the comments below.