We pit the newly launched Kia Carens against its three-row rivals, on paper. 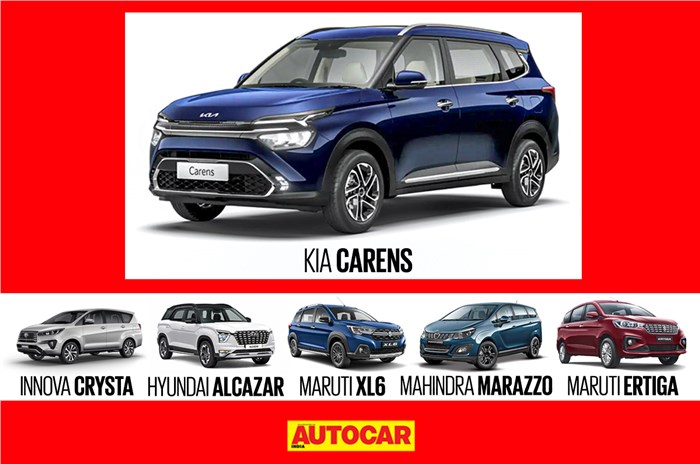 Kia has launched the Carens in India, with prices starting at Rs 8.99 lakh and going up to Rs 16.99 lakh (introductory, ex-showroom, India). The new Carens is available with a choice of three engines, manual and automatic gearboxes, five variants and two seating layouts – 6- and 7-seater.

The Carens rivals other three-row models in the market like the Hyundai Alcazar, Maruti Suzuki XL6, Mahindra Marazzo, Toyota Innova Crysta and Maruti Suzuki Ertiga. Read on to see how it compares against these models in terms of price, dimensions, engines and gearboxes.

Kia has priced the Carens very aggressively seeing as it manages to undercut all competitors here by a significant margin, except for the Ertiga. The disruptive pricing will not only attract buyers of MPVs like the XL6 and Ertiga, but perhaps also of more expensive three-row SUVs. The Kia comes across as being a real value-for-money package and with multiple engine-gearbox, variant and seating options, there’s a model on offer for every type of buyer. However, it’s worth remembering that the Carens’ prices are only introductory and they will be hiked at a later stage.

Coming to its rivals, the XL6 and Ertiga are the most affordable alternatives to the Kia, but both are restricted in their engine and variant choices and are smaller in dimension. The Alcazar also seems to be a bit overpriced in the company of the Kia, especially as both the diesels share the same engine and gearboxes. The Marazzo is reasonably priced, but again, is more expensive than the Carens and is a diesel-only model. The Innova Crysta, meanwhile, is priced a few segments above the Carens, as its petrol range’s starting price itself is only Rs 10,000 lesser than the Kia’s top-spec petrol.

Compared to its rivals, the Kia has the longest wheelbase, but is more or less on par in terms of other dimensions. The Innova Crysta is the longest and tallest overall here, while the Mahindra Marazzo is the widest of the lot. Hyundai’s Alcazar has the highest ground clearance and the largest tyres here. Maruti’s XL6 and Ertiga, meanwhile, are the smallest overall in this comparison. Both MPVs have the same wheelbase, ground clearance and tyre size but, they differ in terms of overall length, width and height.

All models in this comparison, barring the Marazzo, come with petrol engines. The Carens comes with two petrol options, both of which have been borrowed from the Seltos SUV. First is the 115hp, 144Nm, 1.5-litre naturally aspirated unit that’s paired to a 6-speed manual gearbox only. The Carens has the distinction of being the only one to offer a turbo-petrol option here – the 140hp, 1.4-litre direct-injection unit. The Carens’ turbo-petrol can be had with either a 6-speed manual or a 7-speed dual-clutch automatic gearbox. Kia claims that the petrol Carens returns up to 16.5kpl, but didn’t specify for which engine-gearbox combination.

As for the rivals, the Innova Crysta has the largest displacement engine, which is also the most powerful and torquey (166hp, 245Nm). The Toyota’s petrol engine can be had with either a 5-speed manual or a 6-speed torque converter automatic. The Alcazar is not far behind the Innova Crysta, with its 159hp, 191Nm, 2.0-litre unit. Gearbox options for the Alcazar petrol include a 6-speed MT and a 6-speed torque converter AT.

The Maruti Suzuki XL6 and Ertiga share the same engine, which means that they both have the smallest naturally aspirated engine here with the least output. However, the Maruti Suzuki models are the only ones here that come with a mild-hybrid set-up with an integrated starter generator and a lithium-ion battery, which is said to aid performance and efficiency. It’s also worth noting that the Ertiga is the only model here that can be had with a factory-fit CNG option.

All competitors here, except for the Maruti Suzuki XL6 and Ertiga, come with a diesel engine. The Kia Carens and the Hyundai Alcazar come with the same 1.5-litre diesel unit that also does duty in the Seltos and Creta. This unit has the smallest displacement here and the least output – 115hp and 250Nm. Gearbox options for both Korean models include a 6-speed manual and 6-speed torque converter auto. The diesel Carens is claimed to return up to 21.3kpl.

Mahindra’s Marazzo does have more displacement, power and torque than the Kia and Hyundai, but can only be had with a 6-speed manual gearbox.

The Toyota Innova Crysta, meanwhile, has the largest diesel engine in this comparison, at 2.4 litres, and it has the highest output as well, at 150hp and 360Nm. However, unlike the others, the Toyota can only be had with a 5-speed manual, although a 6-speed torque converter is also part of the range.

So that’s how the new Kia Carens fares against the competition, on paper. However, only a full road test comparison will determine how it stacks up in the real world. Stay tuned for that.

Would you choose the new Kia Carens over its rivals? Let us know in the comments section.