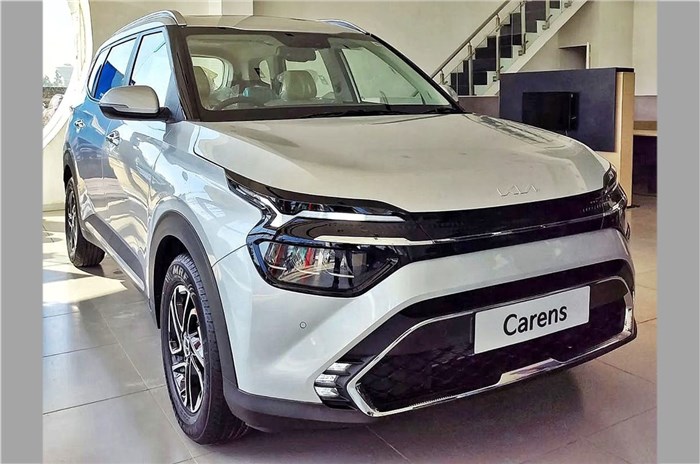 The new Kia Carens has been launched in India with prices ranging from Rs 8.99 lakh-16.99 lakh (introductory, ex-showroom). Kia has priced the Carens agressively, with its starting price putting it right alongside traditional MPVs such as the Maruti Ertiga, Mahindra Marazzo and Maruti XL6. The fully-loaded models, meanwhile, are priced similar to the lower variants of the Hyundai Alcazar. Kia’s three-row Carens is available with a choice of three engines, manual and automatic gearboxes and five variants.

Based on the Seltos platform, the Carens is 225mm longer than its sibling, with the wheelbase too stretched by 160mm. In terms of design, Kia has given the Carens a distinct look compared to its SUV cousin. Called a ‘recreational vehicle’ by the company, the Carens has the look of an MPV in profile but with a number of SUV-inspired design elements.

Moving to the cabin, the Carens gets a seven-seat layout as standard, while only the top versions get a six-seat configuration with captain seats in the second row. As we saw in our review, the Carens does make for a good 7-seater with ample space even in the third row.

The Carens is available in a choice of five trim levels – Premium, Prestige, Prestige Plus, Luxury and Luxury Plus. All variants come equipped with basics such as air-con vents for all three rows and a one-touch electric-assisted tumble function for the second row seat for easier access to the third row. Higher variants add in more kit such as auto climate control, a 10.25-inch touchscreen with connected car tech, keyless go, cruise control, ventilated front seats, wireless phone charging, rear view camera and more.

Kia has also made safety a key focus on the Carens with all variants getting six airbags, ABS, ESC, hill start and descent control and a tyre pressure monitoring system.

Kia revealed that it has received over 19,000 bookings for the Carens since mid-January when bookings opened.

The turbo-petrol and diesel mills are available across all variants with the 1.5 petrol limited to just the Premium and Prestige trims. The diesel automatic is only available on the fully loaded Luxury Plus, while the turbo petrol-DCT can be had in mid-spec Prestige Plus and top-spec variant.

Kia claims the petrol Carens returns up to 16.5kpl, while the diesel returns a claimed 21.5kpl.

You can read about what the Carens is like to drive in our review here.

What do you think about the pricing of the new Kia Carens? Let us know in the comments below.

The prestige version of Carens which is priced at 8.99 Lakhs, what is the tyre size and does it get an alloyed wheel in this price?

The prestige version of Carens which is priced at 8.99 Lakhs, what is the tyre size and does it get an alloyed wheel in this price?