Carens gets a 6- and 7- seater layout; six airbags as standard, along with a long list of features. 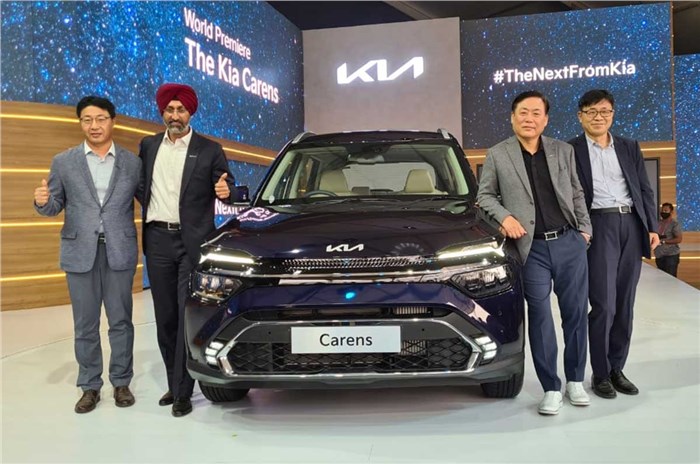 The new Kia Carens made its global debut in India today. Slated for a market launch early next year, the Carens is the Korean carmaker’s fourth product here. And while Kia does not call it an SUV or MPV, the Carens is essentially a three-row vehicle with a blend of SUV and MPV attributes.

With the Carens, Kia aims to target family-oriented customers that want a feature-laden vehicle, spacious three-row cabin and also SUV-like looks. In terms of design, the Carens may have the proportions of an MPV, but it looks quite SUV-ish, thanks to chunky front and rear bumpers and a tall and upright stance. Up front, the face is characterised by a flat bonnet and an upright nose that’s distinctly divided into two parts. The upper portion features a slim grille and a split headlamp set-up that’s grouped together within a contrasting black trim. The Carens gets Y-shaped LED daytime running lamp signatures, with the main headlamp cluster positioned below. Kia's signature 'Tiger nose' styling element is no longer on the grille, but is instead subtly created with the chrome trim below.

In profile, the Carens shows some resemblance with the Seltos, although the rear door is longer than the latter. There’s a strong character line that starts from the headlamps, blends into the doors and then emerges at the rear to meet the tail-lamps. The Carens also gets body cladding over the wheel arches and along the length of the doors.

At the rear, the Carens gets a pair of wraparound LED tail-lamps that are connected via a slim LED strip. The rear windshield is slightly raked and also features an integrated spoiler. The tailgate is upright and just like the front, an aggressively styled bumper with silver inserts rounds off the look.

In typical Kia fashion, the interior of the Carens is feature packed. The dashboard is quite deep, extending well towards the front windshield, thanks to a slight cab-forward design typically seen in MPVs. A 10.25-inch infotainment screen takes centre stage on the dash in higher variants (lower variants get an 8.0-inch screen), below which the AC vents have been integrated seamlessly along the width of the interior. It also gets a new touch-based panel with toggle switches for operating the climate controls. The Carens gets roof-mounted AC vents to improve cooling at the rear, however, this rules out the possibility of a large panoramic sunroof.

The Kia Carens also gets a fully digital instrument cluster, an eight-speaker Bose sound system and a multi-function steering wheel with buttons for audio controls, voice commands and calling, similar to the one seen on the Seltos and the Sonet. As far as seating options are concerned, the Carens will be available in both 6- and 7-seat configuration, with the former getting captains seats for the second row. It also gets electrically powered, one-touch tumble down feature for the second row (first in segment feature) for easy access to the third row of seats. There are also various practical touches around the cabin such as the large door pockets that can accommodate up to three water bottles.

In terms of features, the Kia Carens comes equipped with Apple CarPlay, Android Auto and Kia’s UVO connect, along with 64-colour ambient lighting, ventilated front seats, seat-back tables with cup holders, and an air purifier. On the safety front, the Carens gets six airbags, ABS, ESC, hill-start assist, disc brakes at all four wheels, TPMS, and rear parking sensors as standard across all variants.

Gearbox options with the petrol engine include a 6-speed manual, and a 7-speed DCT automatic gearbox (for the 1.4-litre turbo-petrol only). Meanwhile, the diesel engine will be offered with a 6-speed torque convertor automatic gearbox. These engine-gearbox combinations are the same as the ones offered in the Seltos.

The Kia Carens is expected to see its official market launch and price announcement before the end of the current financial year, which means it will be around February or March next year. When launched, the Carens will rival the Maruti Suzuki XL6, which is also due for a facelift sometime next year. It will see competition from the likes of the Hyundai Alcazar and other similarly priced three-row vehicles in this range.

What are your first thoughts on the all-new Kia Carens? Let us know in the comments below.