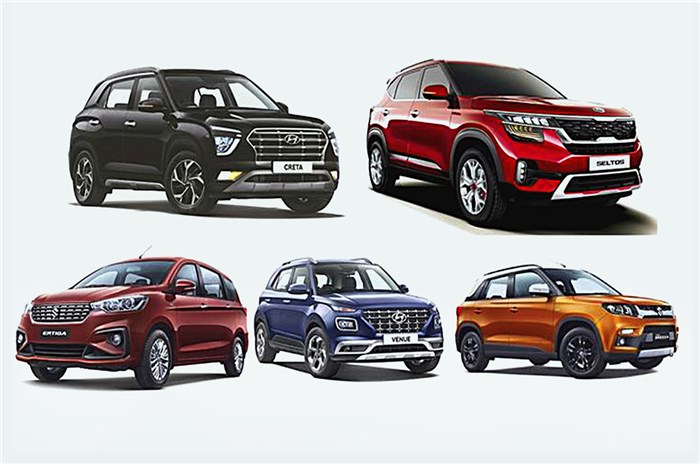 Passenger vehicle (PV) sales have rebounded, and August saw the segment, which comprises cars, utility vehicles and vans, clock total sales of 2,15,916 units. This constitutes a smart 14.16 percent year-on-year uptick. What’s helping this positive movement is the surging demand for SUVs and MPVs, which sold a total of 81,842 units or 38 percent of total passenger cars last month.

This means the segment has more or less regained traction, even in the difficult year – in August 2019, utility vehicles (70,837 units) had accounted for a similar 37.45 percent of passenger vehicle sales(1,89,129 units).

Demand continues to surge for Hyundai Motor India’s new Creta – the midsized SUV went home to 11,758 buyers in August. As much as 56 percent of these (6,540 units) were diesel variants of the Creta as compared to 5,218 petrol variants, indicative that the Korean carmaker’s strategy continues to be bullish on diesel paying off.

The Creta’s pack of powertrains comprises 1.5-litre petrol, 1.5-litre diesel, and a 1.4-litre turbocharged petrol engine options. Clearly, the new BS6-compliant diesel motor has outpaced the other two when it comes to market pull. As per a press statement issued in July by the Chennai-based manufacturer, 60 percent of the 55,000 bookings received for the new Creta comprise the diesel fuel option, which is offered with either a 6-speed manual or a 6-speed torque converter automatic transmission.

The second-gen Creta has been riding on the credentials of its predecessor, which was launched in July 2015. It became the segment leader in the mid-size SUV space and clocked sales of 4,66,839 units in the domestic market until January 2020, before the second-generation model was unveiled at the Auto Expo in February.

In a time of social distancing, Hyundai's digital 'Click To Buy' campaign seems to have clicked with consumers. The company also states that the Creta is the most researched car on its online retail platform, with 30 percent buyers enquiring about the SUV and over 76 percent of bookings of the car coming online.

The new Creta, which competes with the Kia Seltos, MG Hector, Renault Duster and Nissan Kicks, is very much on the upswing. With the festive season around the corner, Hyundai will be doing all to ensure that the Creta stays where it is right now – at the top.

The Creta has helped Hyundai lead the UV market share table, too, at 24.59 percent, just ahead of Maruti Suzuki India, which is at 24.23 percent.

In the April-August 2020 period, the fuel-wise demand situation is similar. Of the total 27,650 units sold in these five months, 55 percentof buyers (15,302 units) opted for petrol compared to diesel variants (12,348 units). The Seltos, Kia’s first product in India, accounts for an overwhelming 97.73 percent of total April-August 2020 sales, with the Carnival MPV accounting for the balance 641 units.

On June 1, Kia announced revised Seltos prices, which now start at Rs 9.89 lakh (ex-showroom, India), and re-jigged the variant line-up. While it is premature in the auto industry for a carmaker to be bringing any updates to a model as fresh as nine months old, Kia’s step can be assumed to have come in response to the launch of the Creta from Hyundai – its sister company – which starts at Rs 9.99 lakh (ex-showroom, India).

The Seltos has been instrumental in giving Kia a strong foothold in the Indian market.The company currently has a 12.79 percent UV market share – not bad for a year-old company – and is fourth in the pecking order among 16 UV players.

Like the Ertiga, sales of the Hyundai Venue are improving month-on-month. Demand for Hyundai’s first compact SUV has been impacted by the surging demand for its sibling, the new Creta. So much so that the Venue, which was the UV market leader in August 2019, is now down to fourth place.

As compared to its sibling Creta, which is seeing strong demand for its diesel powertrain model, the Venue has strong buyer preference for petrol.  In August 2020, 73 percent of buyers (6,045 units) drove home a petrol-engine Venue. Likewise, in the April-August 2020 period, of the total 20,372 Venues sold, 69.37 petrol buyers (14,134) voted for petrol.

The recent past has seen Hyundai introduce minor updates to the Venue. In addition to the upgrade to BS6, the company has added a new ‘Sport’ trim and a ‘clutchless’ manual gearbox (iMT in Hyundai-speak) to the model’s line-up. But new competition in the form of the Kia Sonet and Toyota Urban Cruiser has just arrived.

Launched in March 2016, the Maruti Vitara Brezza, the harbinger of SUV change in the country, is now revving up in petrol format only, with the company having driven out of diesel. Last month, a total of 6,903 units were bought in India, taking the company’s April-August 2020 total to 19,824 units. Compare that with the April-August 2019 total of 41,848 units, when the Brezza was sold as a diesel-only model.

The Vitara Brezza shares its 105hp, 138Nm, 1.5-litre K15B petrol engine with other Marutis like the Ciaz, Ertiga and XL6. A 5-speed manual gearbox is standard, while a 4-speed torque converter-equipped auto is available as an option – our review of the Vitara Brezza showed that this combination works well in unhurried urban environs. Interestingly, Suzuki’s SHVS Smart Hybrid tech is reserved for automatic versions of the compact SUV only. ARAI fuel-efficiency figures rate variants with the 5-speed manual at 17.03kpl, while the automatic, with the mild-hybrid tech, has an ARAI-rated 18.76kpl.

The company is banking on growth returning to the model, given the sharp UV consumer shift to petrol. From 26 percent a year ago, demand for petrol-engine UVs has jumped to 56 percent in the April-August 2020 period, with demand for diesel UVs dropping sharply from 74 percent to 44 percent. The mark-up in BS6 diesel engine prices and the diminishing price differential between the two fuel costs have only reinforced the switch to petrols.

Maruti feels it holds a definite edge inits sales and service experience. In a recent interaction with Autocar India, Shashank Srivastava, executive director, sales and marketing, Maruti Suzuki India, commented: “For any product to be successful and to get the large numbers as the Vitara Brezza has, it is first and foremost about the product. But it is also about the marketing, network, aftersales and consumer retention and satisfaction.”

Exciting times ahead for the UV segment

While August 2020 proved to be an august month for UV sales, the coming months should see plenty of action. Two new compact SUVs – the Kia Sonet and the Brezza-based Toyota Urban Cruiser – have just been launched. While the new Mahindra Tharwill be launched on October 2, there’s also the Renault Kiger slated for launch soon, while the Nissan Magnite will follow in January 2021.

While there’s little doubt that the ongoing fiscal will see overall reduced demand for PVs, expect the UV segment to continue to be the torchbearer of growth in difficult times.