Is the new 6-speed semi-automatic gearbox the best of both worlds, and should you pick it over a traditional manual or automatic? 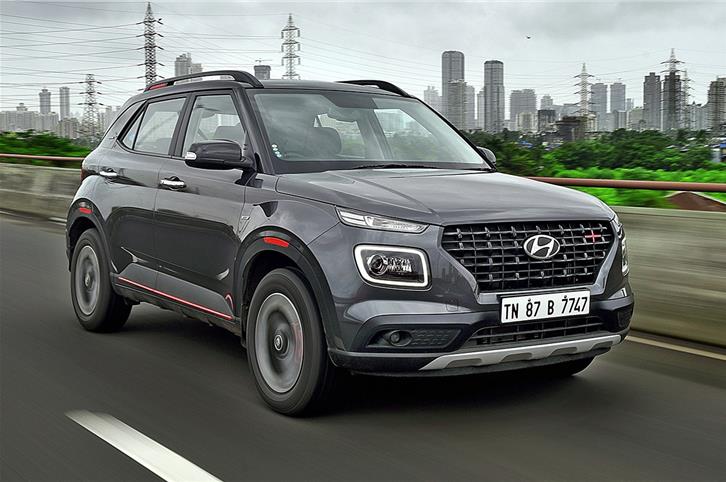 What is the Hyundai Venue iMT, and why does it exist?

The Venue iMT is a new variant of Hyundai’s compact SUV that uses a rather unique gearbox and is offered with the 1.0-litre turbo-petrol engine. In concept, it’s halfway between a manual and an automatic, and with it, Hyundai aims to offer buyers a bit more convenience than a manual gearbox, at a price that’s not too much higher. iMT meant to give drivers the best of a manual and an automatic.

It retains the 6-speed, H-pattern shifter of the Venue’s manual gearbox, but does away with the clutch pedal altogether. This means you can just row through the gears without worrying about engaging and disengaging the clutch.

Why does the car have red bits all over it?

This has nothing to do with the iMT gearbox, but instead is a new ‘Sport’ cosmetic pack that can be added to the SX, SX+ and SX(O) variants, irrespective of the engine and gearbox. Similar to Kia’s ‘GT Line’ on the Seltos and Sonet, albeit with no changes to the equipment list, it adds a few sportier accents to the interior and exterior to set it apart from the standard variants. 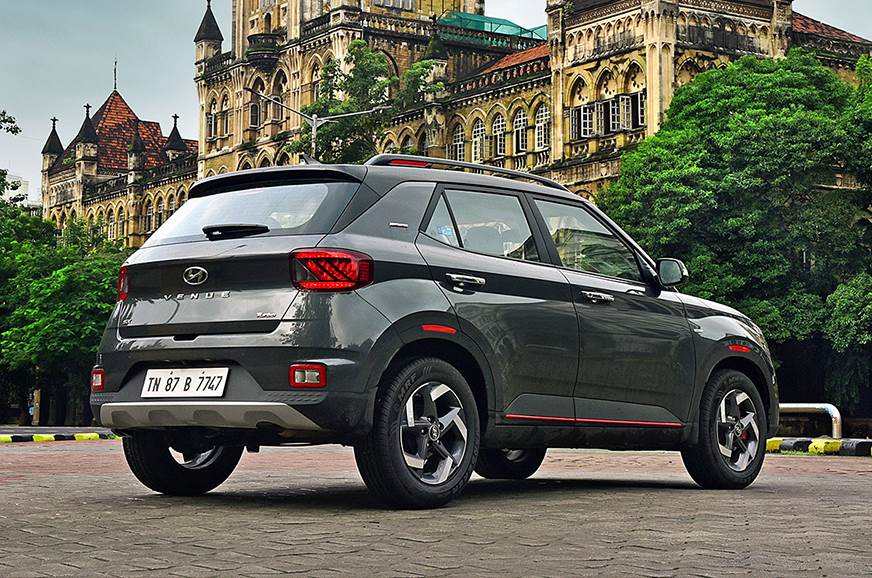 The Venue iMT is available with a new Sport variant that adds red highlights, among other cosmetic changes.

On the outside, you get a gloss-black grille with a red accent in its slats, smoked black headlamp and tail-lamp housings, red accents on the wheel arches, the base of the doors and the roof rails, and red brake calipers. 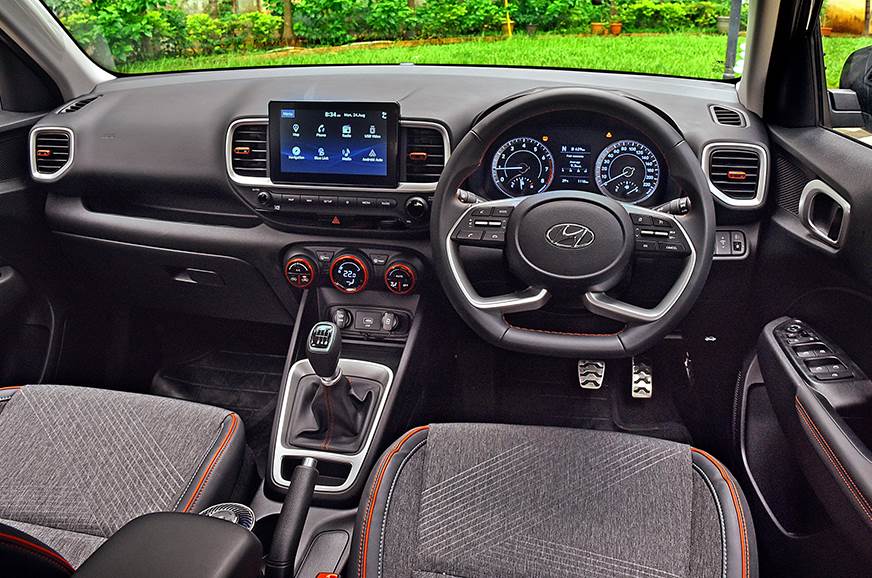 Red highlights and Creta's steering on offer in the Venue Sport's cabin.

Inside the Venue Sport, you’ll find an all-black cabin with red accents, a different set of fabric seat upholstery with red piping, and the ‘butterfly wing’ flat-bottom steering wheel from the Creta, with contrast stitching in, you guessed it, red. Other than that, the Venue remains the same well-equipped, high-quality, albeit not the most spacious, compact SUV it always has been.

How does an iMT gearbox work? 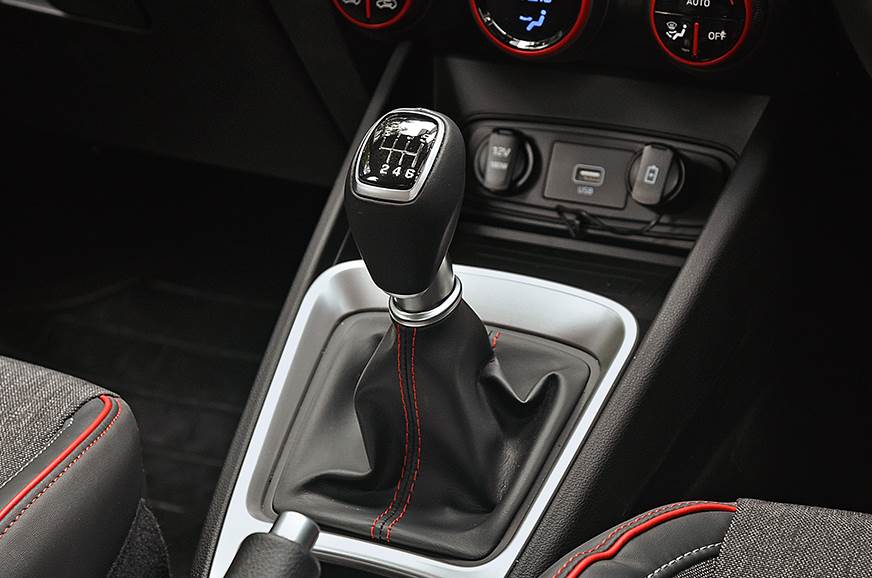 6-speeds to choose from in a standard H-pattern.

Mechanically, an AMT is a manual gearbox, albeit one that uses sensors and actuators to operate the clutch and shift the gears. An iMT, instead, uses sensors and actuators only to operate the clutch, while you have to change the gears yourself via a H-pattern shifter, like any manual. Think of it as a little robot inside the gearbox, calculating exactly when you want to shift and pressing and releasing the clutch pedal for you. 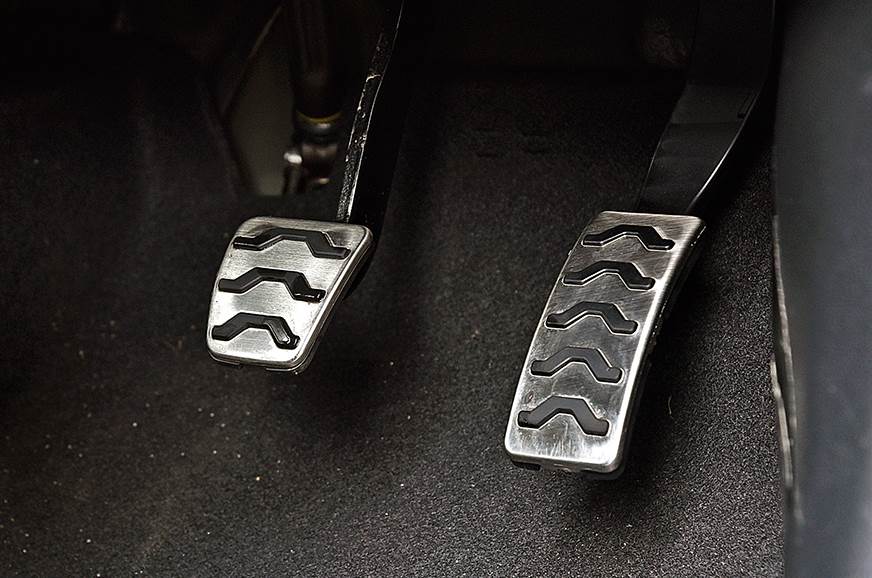 An ‘intention sensor’ detects when you move the shifter out of a gear slot and then figures out the clutch input required, and will then figure out which gear you’re slotting it into next, match the revs and pop in the clutch. And because an electronic brain is in charge of the clutch, you can never stall it.

How do you drive a Hyundai Venue iMT?

Even after years of driving, it’s certainly a new experience. You have to be in neutral to start the car, just as in an AMT, and once you slot it into first and take your foot off the brake, it gently creeps forward without any throttle input, just as if you’d stepped off the clutch carefully in a manual.

At first you find your left foot fumbling about for a pedal to press, but you soon learn to pin it to the dead pedal, as you would in an auto. It will even start in second gear if you’re on a flat surface, but try and start it in third or higher, and you will get a loud beep and a warning on the MID to shift to a lower gear. Similarly, if you accidentally leave it in a high gear and let the revs drop too low, you’ll get the same warning, but it still won’t stall, as eventually it will engage the clutch. 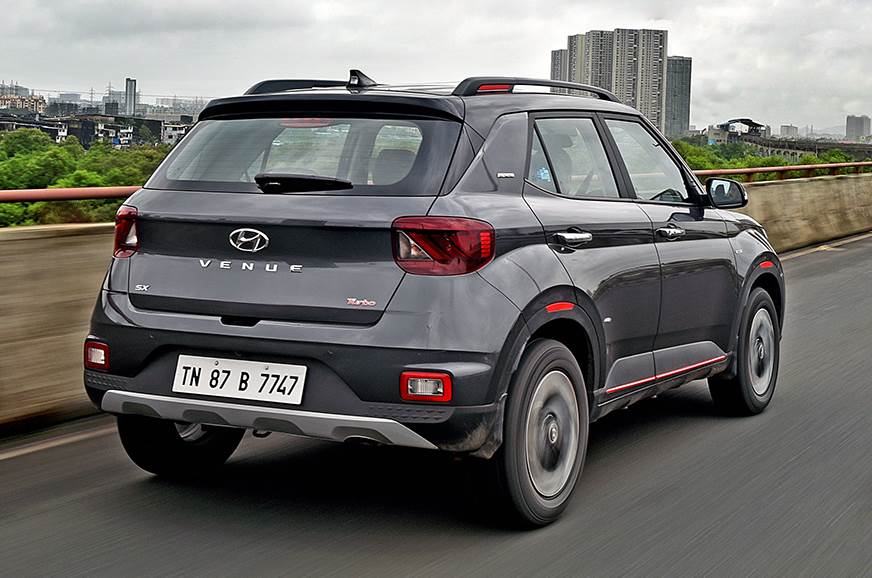 Those familiar with an automatic or a manual may find the iMT takes getting used to.

Once you’re on the move, you row through the gears just as you would in a manual, except without having to press a clutch, which again takes some getting used to. The process is impressively smooth at casual driving speeds, and you’re inclined to lift off the throttle every time you make a shift, but you don’t have to. It will let you shift gears with the throttle completely mashed to the floor, but if so, you’ll be met with a drop in revs, a slight pause in acceleration as the clutch engages, and some resistance from the gear lever. You can tell it’s not the ideal way to do things, and lifting off for shifts is just smoother.

The real advantage of this gearbox can be felt when you’re crawling in bumper-to-bumper traffic. Simply leave it in first or second and lift off the brake to roll along, applying throttle when necessary – and this is where it’s most like an automatic gearbox. Your left leg will thank you after a long, congested commute.

Where it gets interesting is starting from rest on a slope, which is where some AMTs can get caught out. In an iMT, however, because the software, sensors and actuators only have to work out the clutch input and not the gearshift, it works considerably better. On a mild gradient, you can easily step off the brake and onto the throttle without the car rolling back. This top variant, however, is equipped with Hill Assist Control, so it will be interesting to see how lesser variants manage without it. 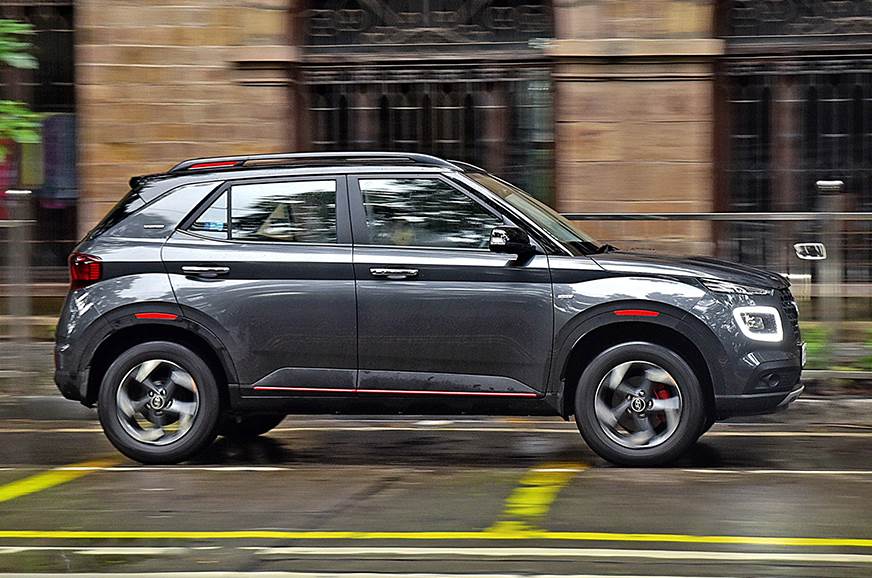 When driving the Venue iMT, lifting off for shifts will make your drive smoother.

How does the Venue iMT compare to the manual and DCT auto?

You certainly don’t get that degree of control as you would operating the clutch yourself in a manual. There are times when you’d want to, for instance, slip the clutch and control the revs, such as if you’re stuck in sand or loose mud, or if you are faced with standing water (welcome to the club, Gurugram, from a Mumbaikar), and simply must drive through it. In situations like this, the iMT behaves like an automatic, and you just have to choose the right gear and floor it. It will, however, rev all the way to the redline and stay there until you shift, as in a manual.

A driving enthusiast would prefer a manual as well. For one, you can’t launch the Venue iMT hard. Whether you try to build up the revs and then slot in a gear, or hold it on the brake while in gear, the system prioritises smoothness and clutch preservation, so it will always push you off the blocks gently, rather than as quick as possible. On the flip-side, because an algorithm is controlling the clutch and not a human, it will likely let it last much longer. 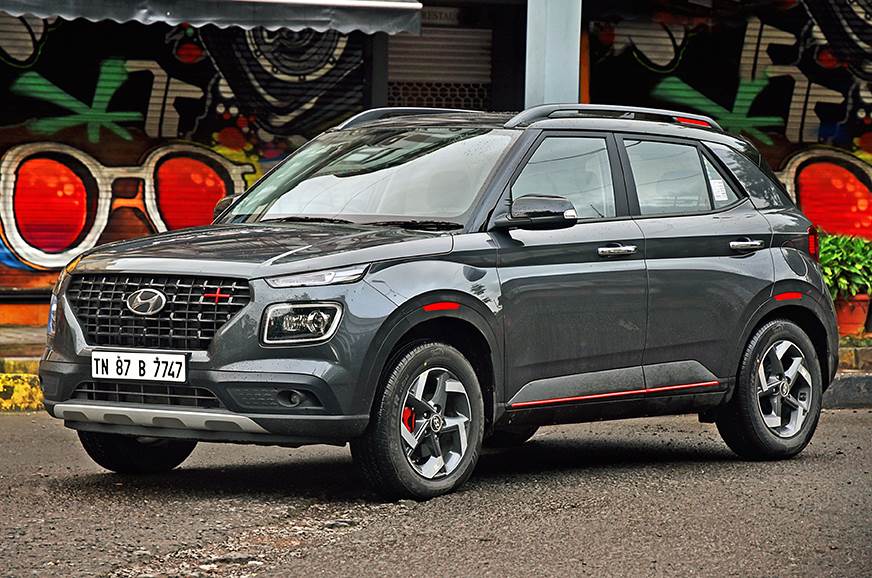 The iMT has been programmed for smoothness and clutch preservation rather than performance.

Moreover, you don’t get the same involvement in the driving experience as you would in a manual, nor the satisfaction of executing a perfectly timed shift. Going flat out, when the revs are high and you want to shift as quickly as possible, though shifts stay smooth, you will still get a momentary pause and subsequent ‘head nod’ between gears, as the sensors and actuators catch up. Much like an AMT, then, it’s a powertrain that’s at its best when driven leisurely.

Compared to an automatic, an iMT obviously doesn’t give you that ultimate convenience of never having to shift at all, and the auto gearbox you get with the Venue’s 1.0 T-GDi engine is not a cost-effective AMT, but a high-tech dual-clutch auto. This DCT gearbox is a quick shifter too, whether you’re cruising, launching from rest, or going flat out, and should you want to take manual control, you get paddle shifters as well. 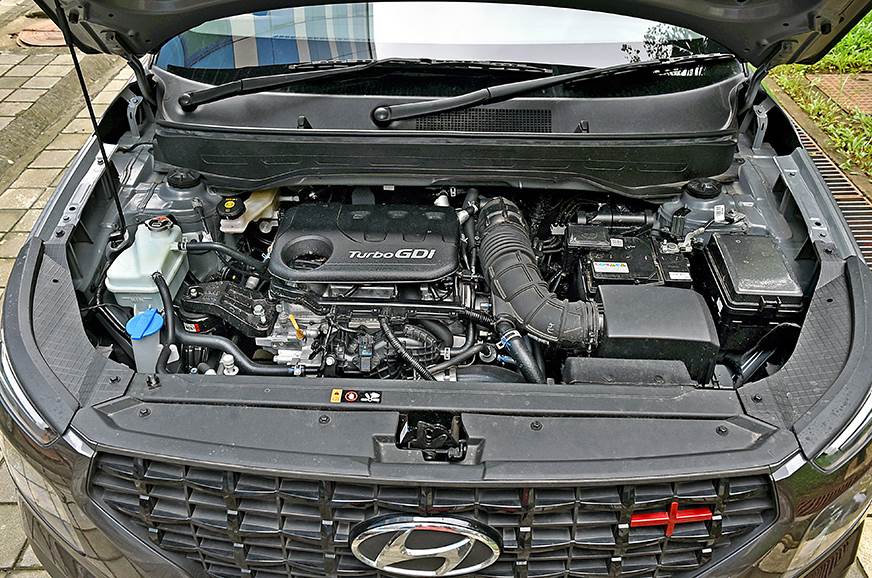 The Venue iMT is only available with the 120hp, 1.0-litre turbo-petrol engine.

On performance, the iMT can’t quite match up to either – 0-100kph takes 13.47sec, a full 2.23sec slower than the Venue manual and 1.57sec slower than the DCT with the same engine, and that's almost entirely down to the fact that you cannot launch the iMT hard. Worth noting, however, is that while the Venue iMT we tested was a BS6 car, the other two were BS4 spec. The iMT is a lot closer to the manual, naturally, when it comes to in-gear or rolling acceleration, as they function the same way, though this is where the DCT is significantly quicker, by as much as 5sec – but that’s thanks, of course, to the automatic kickdown.

Though we haven’t done a proper fuel-economy test, expect the Venue iMT to come quite close to the manual as, once again, you’re in control of the throttle and the gear shifts, so it all depends on your driving style.

The price certainly plays a big part. The variants don’t match up like for like, but while the DCT auto costs somewhere between Rs 50,000-1,10,000 more than the manual, the iMT costs only Rs 15,000 more than a manual. For that small premium, the convenience you get, especially in slow traffic, is immense. In fact, the Venue’s cousin, the Kia Sonet, has foregone a manual gearbox altogether for its 1.0 T-GDi engine, giving you the options of iMT and DCT only. 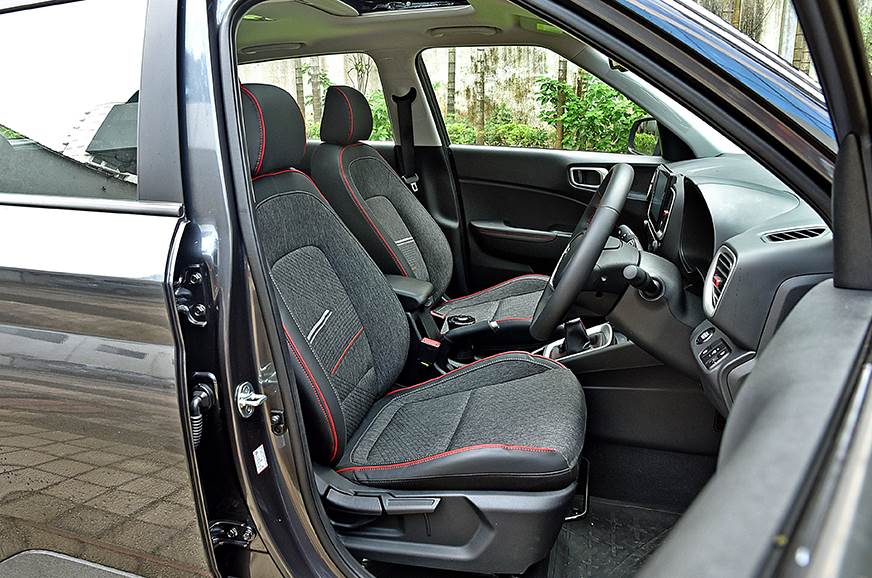 Aside from the highlights, there's no change inside.

Interestingly, however, despite it being the more expensive technology, Hyundai offers the DCT in the lesser S trim at a lower price (Rs 9.65 lakh), while the iMT is only offered in the higher SX trim onwards, starting at Rs 9.99 lakh, which further confuses its positioning.

For some, the iMT will be the best of both worlds, giving you control of the gears like in a manual, with the convenience of an auto in the lack of a clutch pedal, and all at a reasonable price. For others, it might be a case of ‘neither here nor there’, choosing either the purity of a proper manual or making the price leap to the full-fledged DCT auto for the ultimate ease of driving. Will this intriguing new tech be a hit or a miss? Only time will tell.