The Sonet HTX trim is now available with automatic gearbox options for both the petrol and diesel engines. 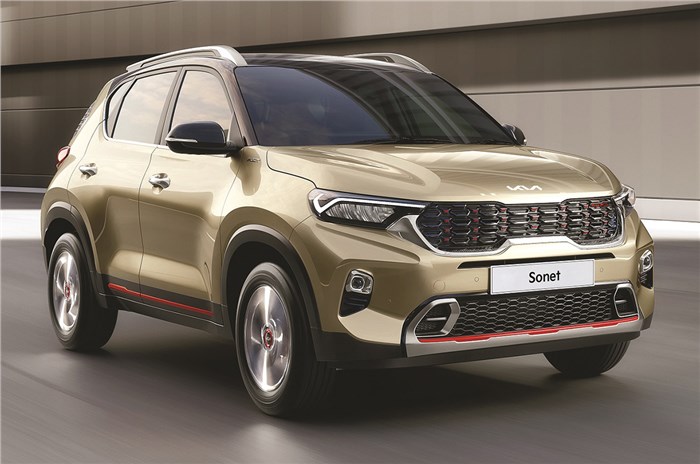 The Kia Sonet has just received an update for the 2021 model year that has brought with it not only the new Kia badge, but also new trims and an updated features list. Prices for the updated Sonet now start at Rs 6.79 lakh for the base petrol and Rs 8.35 lakh for the base diesel.

Besides this, the trims have also been given a rejig in terms of their feature list. The HTK+ trim in addition to previously offered features, now gets keyless entry, along with remote engine on/off on the turbo-petrol and diesel variants. The iMT versions are available with a sunroof, and keyless entry is now offered with the 1.2-litre petrol.

The HTX+ trim gets the same features as the HTX trim mentioned above, though it also gets the new AI based voice command system that can be triggered by the phrase “Hello Kia”. This feature is now also offered on the GTX+ trim.

The rest of the feature list remains the same as the previous model. This means the top-spec Tech Line trim - the HTX+ still gets a sunroof, leatherette upholstery, ambient lighting, ventilated front seats, cruise control, an air purifier, a Bose audio system, a 10.25-inch touchscreen with Apple CarPlay and Android Auto, the brand’s ‘UVO’ connected car tech and much more.

As before, the Sonet continues to be offered with petrol and diesel engine options. The two petrol engine options include a 1.2-litre, naturally aspirated unit producing 83hp and 115Nm along with a 1.0-litre, turbo-petrol engine developing 120hp and 175Nm. The 1.2-litre can only be had with a 5-speed manual gearbox, while the 1.0-litre comes with either a 6-speed iMT gearbox or a 7-speed DCT automatic gearbox.

The diesel engine is a 1.5-litre, four-cylinder, turbocharged unit that churns out 100hp and 240Nm. It can be had with either a 6-speed manual or a 6-speed torque converter automatic gearbox. The diesel-automatic configuration, however, produces 115hp and 250Nm (up by 15hp and 10Nm).

Is this the upcoming Kia MPV for India?